Many thanks to Stuart Dickson for this race report.

A bright fresh gorgeous autumn morning greeted me on the Sunday of the Town Moor Memorial 10k Race. And on arrival at Exhibition Park the sun was shining brightly one of those crisp fresh mornings that are just perfect for running.

The junior races were just finishing as I made my way over to the café in the park and although it was still only about quarter to ten it was starting to get busy, collecting my number and timing chip from the very efficient officials in the tents next to the café I bumped into Keith Rooney, although he had been suffering from a cold ‘man flu’ for a couple of weeks he said he felt confident for this mornings race, (women please note man flu is very debilitating and you will never understand the suffering us men endure.. joke!!) dropping my bag off and after attaching race number to the TBH top, fiddling with the new fangled timing chip eventually attaching to the trainers I was ready. After a quick trip to the Gent’s I bumped into Denise Waugh struggling with a big box containing the Watson Challenge Trophy won last year by the Men’s team and hoping to be retained again this year, although offering help Denise declined saying it was a good warm up for the 10k!!

As I wasn’t sure of the exact race route I had a look outside to check the route map although looking complicated at first I realised that it was a two lap course of the Exhibition Park and Town Moor, by this time the area around the finish and café were starting to get really busy with a long queue for the race number tent.

Many TBH faces also starting to appear bumping into Steve Compton, Chris Parkin also doing the 10k and many supporters from TBH. Now Steve had put a call out on Facebook the night before requesting to borrow a Garmin as his had died and although he had been able to borrow a neighbours within about 10 mins he had three offers for the use of theirs from fellow TBH. A special mention must go to Emma Brannan and Penny Wilmott who are both out injured although they may have been coming down to support anyway had sought out Steve to offer their watches which I think was absolutely fantastic.

So to the race nearly running out of time for a warm up I took a short run up onto the Town Moor bumping into Kev Jeffress and Nick Pearson, eventually taking a place middle of the gathering race start.

One and only criticism of the start was as there was a minutes silence at 11:00am it was difficult to hear when this was to begin as most people with watches had probably put them into start mode for the beginning of the race and we weren’t able to tell the exact time to start the silence and people only stopped talking when they realise people in front were either saying hush or had fallen silent maybe for future a whistle blown or loud speaker to acknowledge the start and finish of the minutes silence would be better way to commence the silence.

So to the start or so we thought after a little bit shuffling forward we crossed the start line trying to keep up with Steve and Nic as we made our way down past the small lake at first I didn’t realise that we were going the wrong way, although passing the 5km sign post should have been a give away!!  Although I did think to myself I’m sure on the route map we were supposed to continue around the lake rather than doubling back and crossing the finish line, so as we passed the lake for a second time people in the front had realised and also a bit shouting from the marshals we came to a stop. Although I didn’t see the offending cyclist interloper what had happened a member of the public had ridden onto the course just as the front runners had started and as the cyclist was wearing a high-viz top continued to follow the said cyclist the wrong way.. (Has anybody consider the poor cyclists in this! as he though he was going for a nice Sunday morning cycle ended up being chased by 700 runners I bet he beat his PB! and rumours are he didn’t stop peddling until he got into Gateshead!!).

Anyway the re-start after about a 15 min delay we all got underway for a second time although a bit fast for a warm up the false start was taken all light heartedly joking from everybody they were on for a PB! Around the lake back across the start line and onto the Town Moor we were away, The support from the sidelines was absolutely fantastic and it felt like every other cheer was for Tyne Bridge, too many people to mention but noticed a few who have been injured for a while so again to pop down and cheer us on was so much appreciated and shows what a fantastic club we have.

Out into the open of the Town Moor the wind was blowing across the route although staying with Steve and Nick passing a few other runners I eventually got into a steady pace through the gate at the end of the Moor and along Grandstand Road although I was sticking to Steve, Nick had dropped off slightly and back onto the Moor Keith eventually caught and passed both of us and inspite of the recent cold was flying until we reached the bottom of the Moor and probably the trickiest part of the course at the museum, Keith was now a couple of runners in front of us and as he went through the gate and around the museum he slipped in the mud and fell to the floor although he was quickly back on his feet it had certainly knocked him out of his stride passing him I asked how he was and said he had hurt his knee I encouraged him to carry on  although you could tell it was going to take a while to get back into his stride.

Steve and I were now into Exhibition Park again around the lake and on hitting the 5km marker (again!) (spotting Louis Goffe and Darryl Davison giving some great encouragement) Steve started to pull away and memories of the last 10k race i had with Steve when I lost him at the same point at the GNR 10k race in July started flooding back, Across the finish line for our second lap and again massive encouragement from the TBH crowd. A big thanks to Dave Anderson who encouraged me to catch and keep up with Steve realising I was starting to slip behind, also to Tim Hawkins (who was flying and passed me as we moved onto the Town Moor a second time) giving me encouragement to keep going although I couldn’t keep up with Tim I had Steve in my sight and  tried not to let him get to much of a lead.  Onto Grandstand Road again and started to feel a bit more strength in my legs and while I passed a few more runners I was feeling better than I had since the 5km point down again to the bottom of the Town Moor around past the museum taking it careful over the mud and past the lake, at this point I had just about caught Steve and passed him just before the sharp right hand bend behind the café and now for a sprint passing a Wallsend and a Heaton Harrier on the finish straight, stopping my Garmin on 45:42 on the finish line (a PB by over 2mins). The final push must of taken it out of me as gasping for air at the finish one of the marshals said keep breathing take deep breaths!! 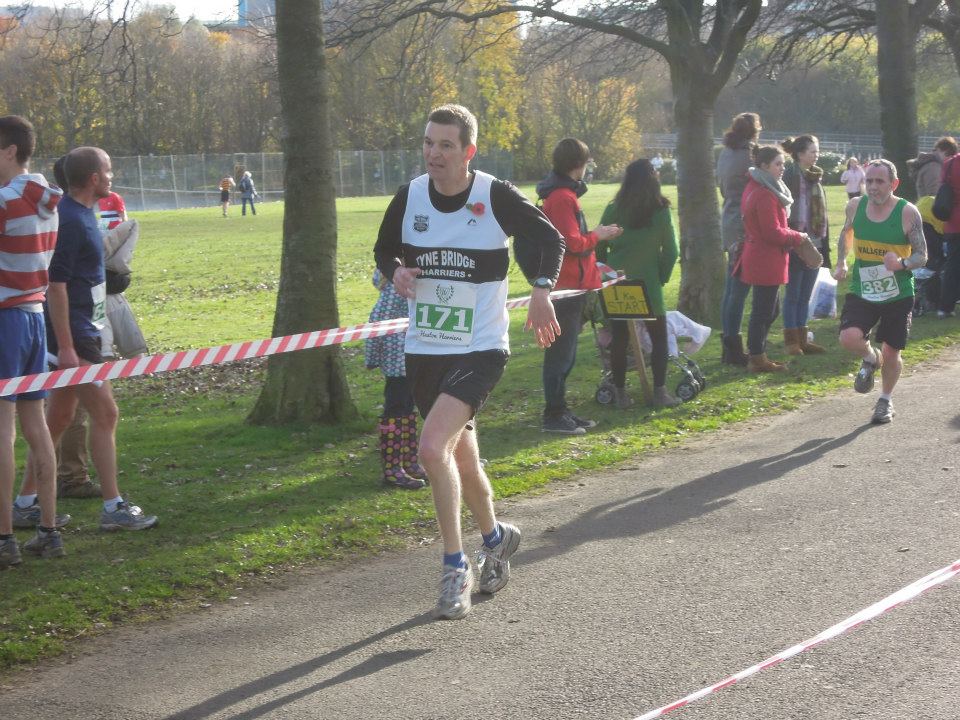 After a short recovery I met Nick and Steve congratulating then on their race Nick with a PB of 46:20 Steve with a time of 45:51 both fantastic times, also bumping into Simon Kristiansen who had finished 9th with a time of 34:17. He also mentioned he thought the men had retained the Watson Challenge Trophy, which later was confirmed so another fantastic achievement with Sparrow, Simon, Rob Clark and Kev holding off strong challenges from Gateshead and Heaton Harriers a very well done!

Also congratulations to Ian Hudspith (Morpeth) who won the race and Alyson Dixon who was first female finisher.

A short walk back to the café to collect my bag met other TBH who had finished the race to mention a few (apologies if I have missed anybody):-  Alex Lockwood with a PB of 41:28, mentioning he had no option as DD had given him his number for this race on the condition he got a PB, Sophie Marr although disappointed still got a time of 41:42 and fastest female from the club also after the little tumble in training on Thursday another fantastic time. And also Denise who seemed well pleased with her time of 54:15. Keith had thankfully finished the race at 46:53 and was well pleased with his time too, Lucy Matheson timed at 45:06 and Tim who mentioned it had been his first 10k with an excellent time of 44:43. Sean Kelly time of 38:07 and was 2nd in the over 40 category.

So to summarise, a fantastic race with over 35 runners from the club competing, I may be wrong but no other club looked like they had as many racing. Again fantastic support from the sidelines from many and I mean many Tyne Bridge supporters some who are injured and rather than sitting at home recovering made the effort to come down and cheer the club on it is so very appreciated.

And I must mention the British and Irish Masters Cross Country Race the day before in Belfast where TBH was well represented with their respective countries, another fantastic weekend for Tyne Bridge Harriers. 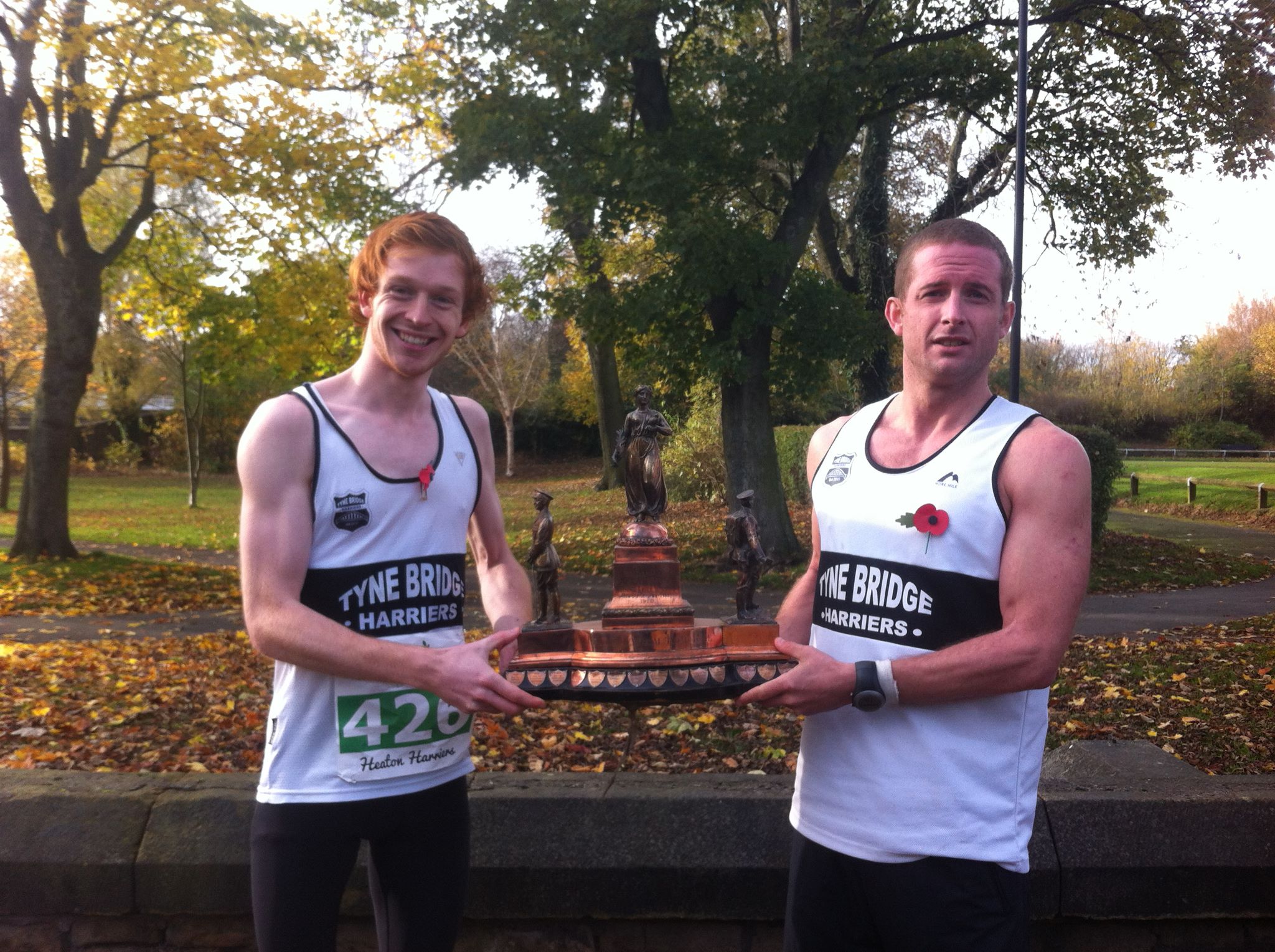 Permanent link to this article: https://www.tynebridgeharriers.com/2012/11/13/town-moor-memorial-10k-race-report/