Narrowly missing out on an England vest was TBH Club Captain, Paul Hilton, who was named as one of the reserve runners for the V40 team. Although Paul never got to run in the full race, he did however compete in the ‘Open’ race – available to all the other reserve runners – and came home in 4th place. What are the odds Paul will become the next runner to represent his country at international level?

When Tyne Bridge Harriers was formed in February 2011 it never occurred to me that we would have three athletes competing on International Duty at the same time. Not only three athletes but three athletes from three different countries, namely Scotland (Kenny Mac), England (Keith Smith) and Northern Ireland (Steve Cairns).

We were further bolstered by Paul Hilton who was a reserve for the England V40 team and ably supported by Mal Steele and his partner Kim, Scottish Ultra Marathon Champion Izzy Knox (who is the partner of Steve Cairns), David Daniels (who also competed in the Open Race) and Gwen (Girlfriend of Keith Smith)

The race was due to take place at Stormont which I am told is a classic cross country course but due to flooding we had to change to Queens University in South Belfast. Queen’s University Belfast has a record of academic achievement which stretches back more than 150 years. Founded by Queen Victoria, the Queen’s University in Ireland, was designed to be a non-denominational alternative to Trinity College Dublin which was controlled by the Anglican Church.

I flew over on Friday morning, with my taxi booked for 5am I was at the airport with plenty time to spare and on arrival I met Keith and Gwen and we nattered over very early coffee and bacon butties. The conversation was so enthralling that we nearly missed our flight and we raced onto the plane with seconds to spare. I wish to place it on record that I was maybe ahead of Keith by 2 seconds getting to the plane. On the plane there was plenty other North East Athletes and we piled onto the bus  to take us to town. By this time it was only 9am but give the Jury’s Inn their due they found me a room and I went straight back to bed.
I awoke at lunchtime and sauntered about town, walked around the Botanic Gardens and went out for dinner with the Scotland team for an evening meal.

Race day came and we were shepherded out to the venue by bus at 0930hrs and after team photographs we went around and surveyed the course. The course was similar to South Shields with long flat grassy patches punctuated with small rises. there was a couple of really treacly parts where you were ankle deep in mud but apart from that it was a course for the fast lads.

Guy Bracken was off in the v50-64 race and he had a brilliant run as he came 6th in his age category.

Then it was the younger men off (HA) and I stood near Jon Archer, Stevie Cairns, Brian Hetherington and Keith Smith. Off we go tightly bunched together, 200 metres of flat fast grass before turning left up a sharp rise. Guy had warned me about this hill and advised me to take the low ground and to be honest it was great advice. Four identical laps of the course was ahead so I decided to ease into the race. Brian and Keith had set off fast and were approx 200 metres ahead of me and initially I was beside Russell Whittington of Scotland for the first two laps. We kept clipping each others heels, it was my fault honest Russell!!

The course circled some football pitches with a sheer drop before the end of the first lap into another boggy trench. The support on the sidelines was immense, I had the double advantage of all the Scottish support as well as all the Geordies screaming my name.
Brian and Keith were still neck and neck ahead of me but slowly but surely I was clawing them back. The bell came for the last lap and I was just behind Brian and at the devil of a rise I again took the outside and Brian went up the middle and I sneaked past. I was making ground on a few more people and on the last rise I overtook Keith. I clawed and scraped to the line passing a few more people and made sure nobody had passed me. Seconds later I was joined by Keith, and Brian with Jon Archer finishing in v35 Silver Medal position ahead of us all. Bizarrely I am 40 seconds down on my time as is Brian Hetherington which I hope will get rectified.

Steve Cairns for some reason has been missed out of the results but well done for 3rd V45 and 20th position overall.

Next off was the open race and it was amazing to see Paul Hilton and David Daniels running in their Tyne Bridge Vests alongside Richard Parker of Tynedale and Harry Matthews of Elswick. For the first two laps Paul was right up in a bunch of 5 athletes with David just behind. Paul ran admirably and finished 4th overall with David finishing 9th just behind Richard Parker. David is the consummate Gentleman when it comes to Athletics and it was great to see him gritting his teeth and going all out to to try and catch the lad in front at the finish. He definitely entered the “hurt locker” sprinting to the line. He also managed to kick a stray Rugby ball back onto the pitch whilst running in full flow during the race.

Conclusion- WHAT AN EXPERIENCE. The organisation was excellent, the support was deafening, the location and the facilities were 22nd Century. The night time function was out of this world. Belfast is a beautiful City, the people are warm and friendly, the Guinness is great and the craic just as good.

Anybody that has the aspiration, ability, the drive and the determination to be able to run next year in Colwyn Bay, North Wales please please start training now, get your times improved – particularly your 5k/10k times – and sample the experience, it will stay with me for the rest of my life.

More good news is that Izzy Knox is joining Tyne Bridge which will bolster the Tartan Brigade at the club and as she is a 40 minute 10k runner and 5th in the UK Rankings for 100k she will be a welcome addition.

Below are some photographs from a fantastic weekend. 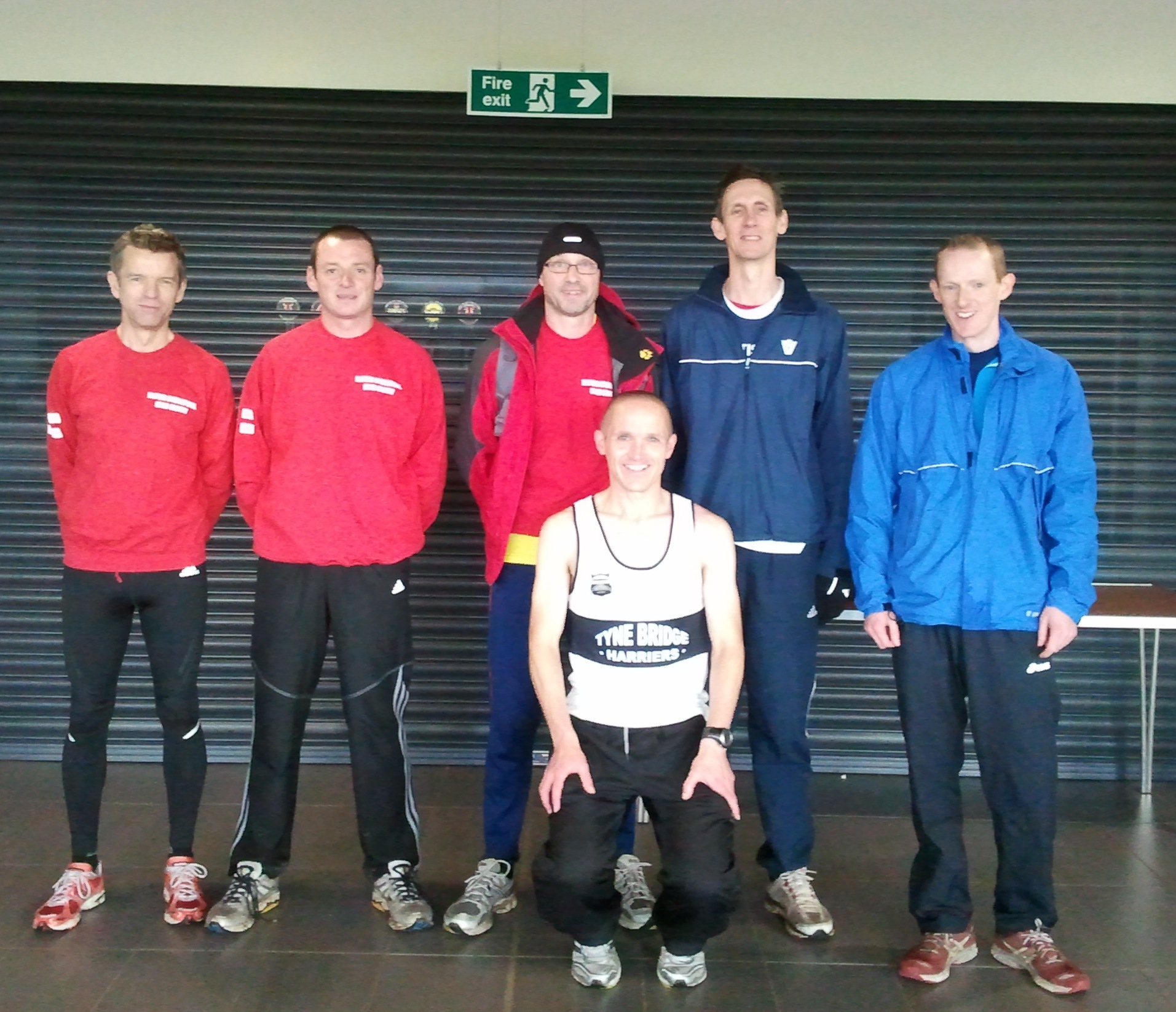 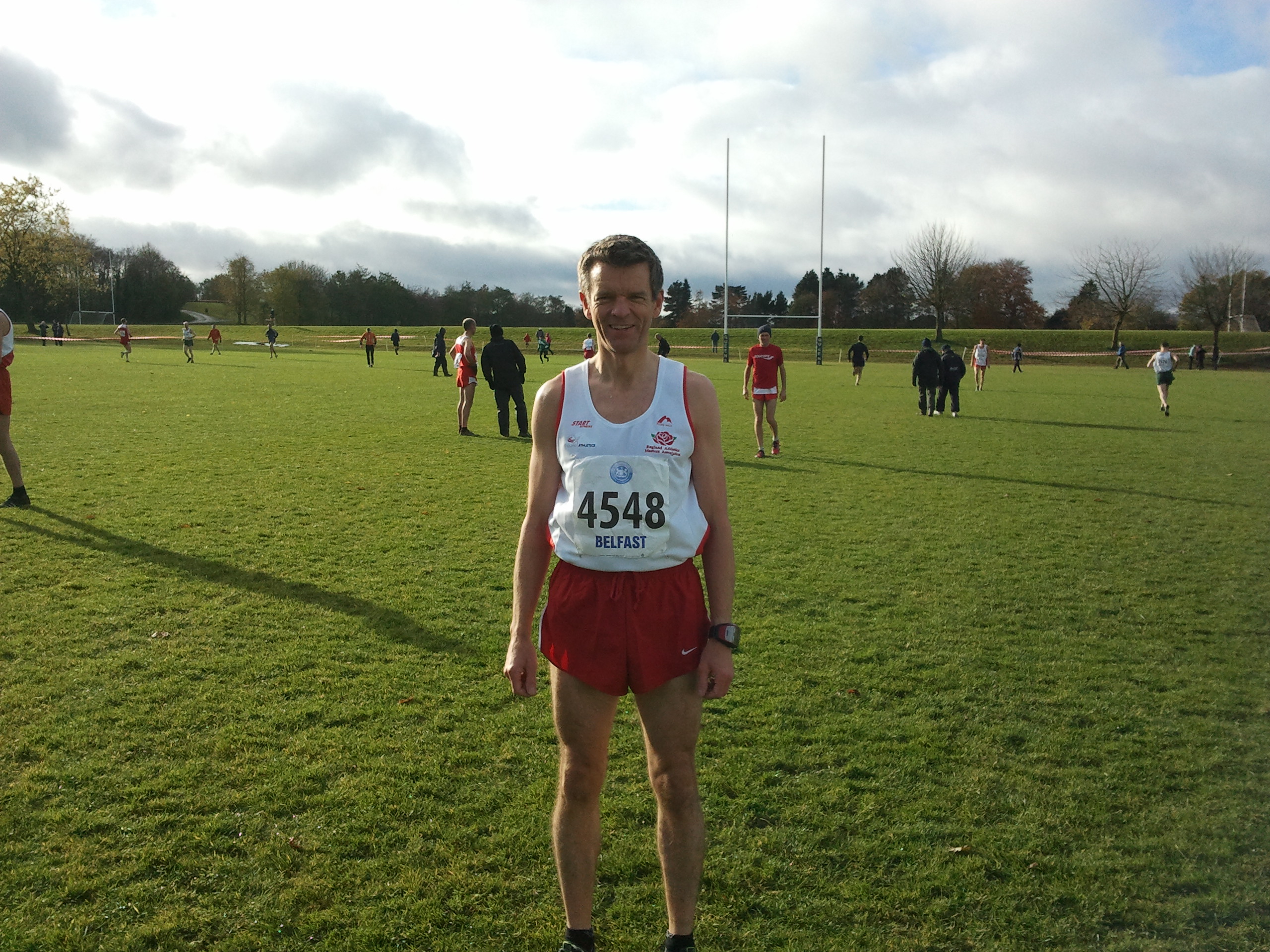 Keith Smith in his England vest 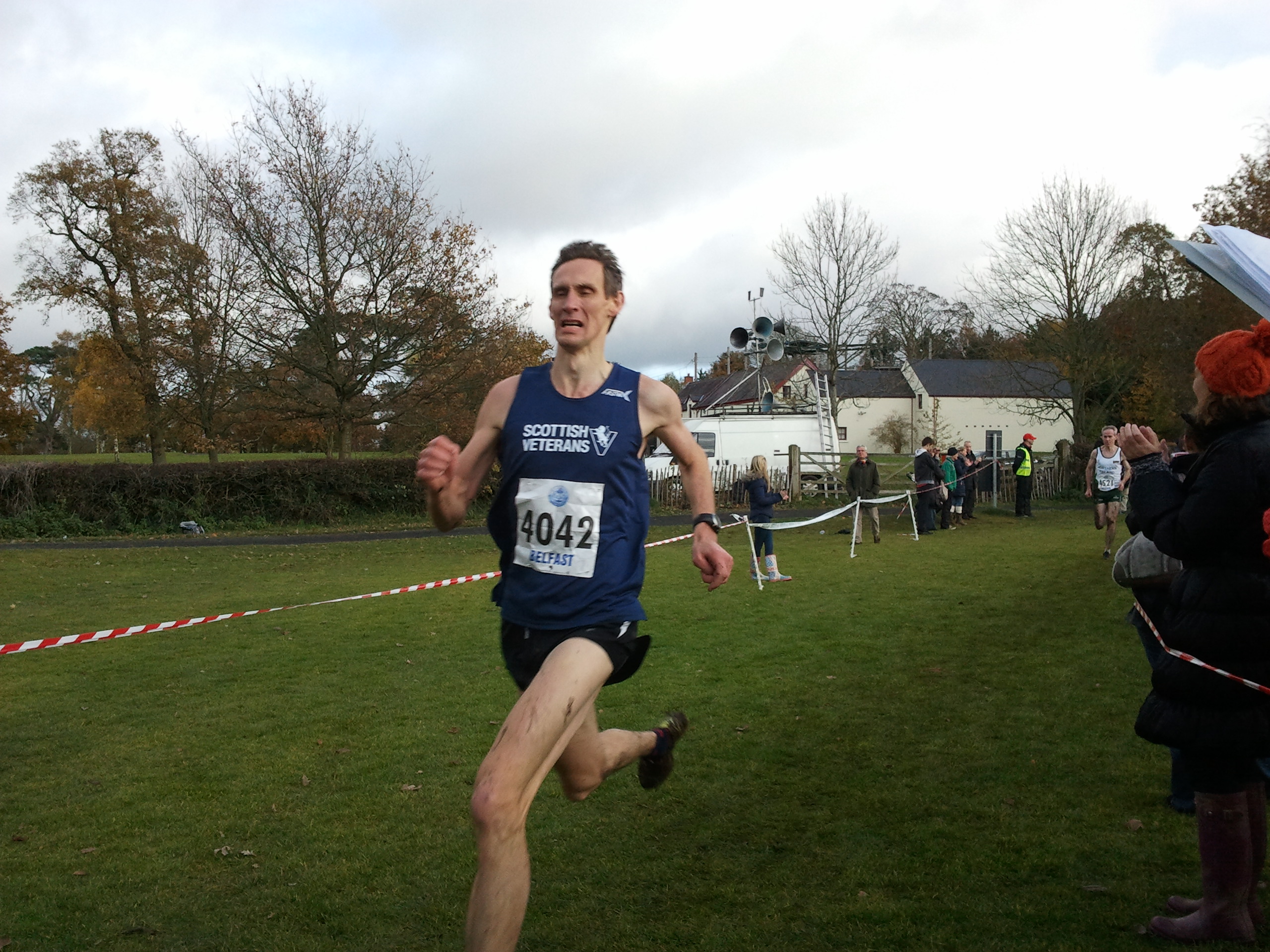 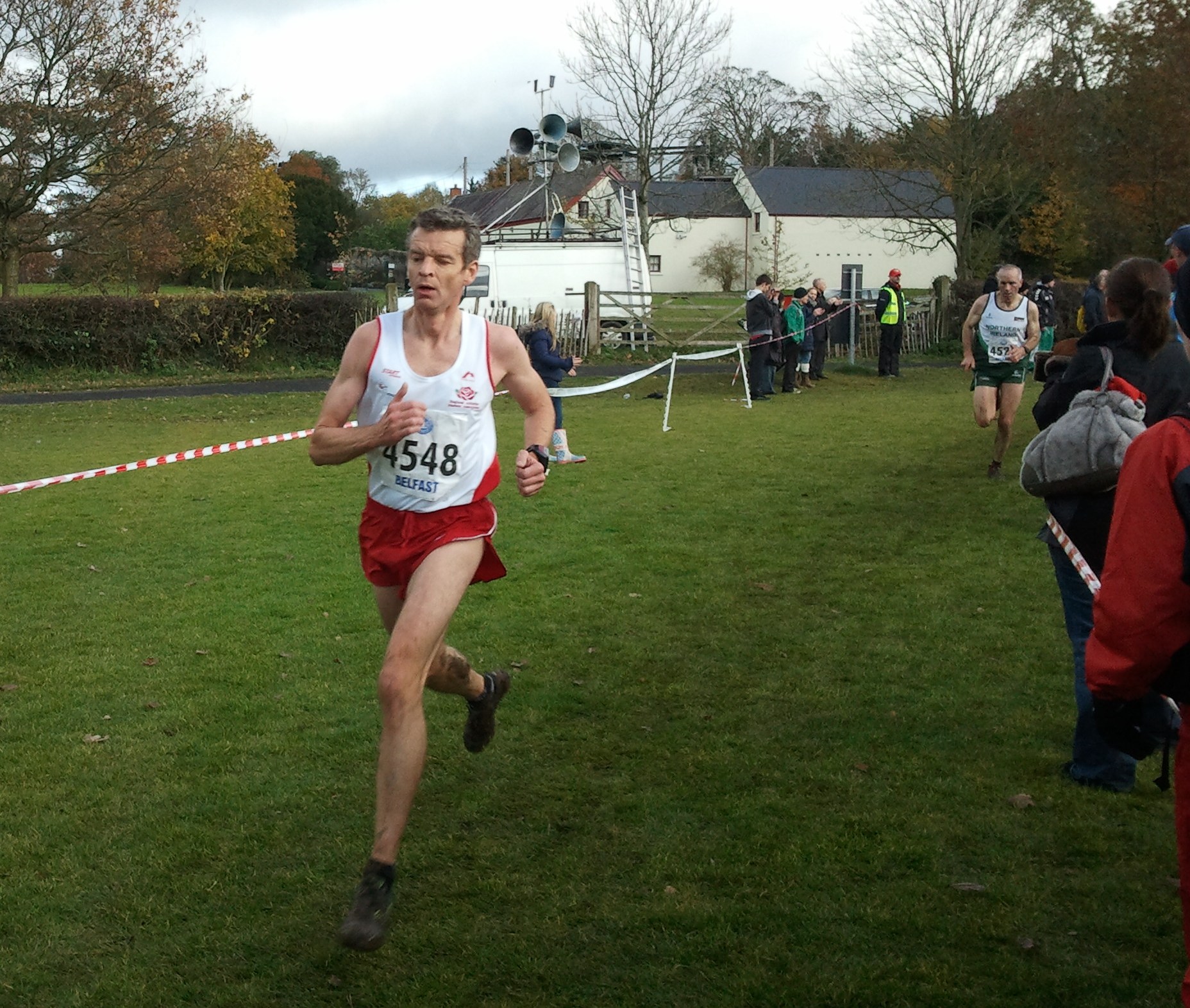 Permanent link to this article: https://www.tynebridgeharriers.com/2012/11/11/british-and-irish-masters-cross-country-international-race-10th-november-2012/