Dave Moir sends in this report from Sunday’s race.

Mud, Mud Glorious Mud
After a rather disappointing outcome at Chester 3 weeks ago (unable to run due to a pre-race chest infection) I sort of wanted to replace it with another marathon, as I was still in fairly good marathon shape. I toyed with the idea of doing the TM marathon for a while, as having ran it before, I know it’s not an easy venture. Not only is there the 5 lap thing to get your head around, the weather (in particular the wind) plays a big part in it, and there is also an off road 600m uphill section which takes it’s toll by the last lap. I watched the long range weather forecast which kept changing dramatically, so gave up on that idea, and was eventually persuaded to enter by Dave Young last Tuesday at the club.

The wet week leading upto the race resulted in the course being very muddy, and as the race wore on, it became as bad as a cross country course in places. It was warm enough though and the wind was OK but it did pick up later on. Anyhow, with plenty of TBH supporters at the start, and through out the course of the race, we set off. I even managed not to win the “first donkey past the museum”  race that I did last year, and let a lead group of 4 head off, forming a second chasing pack a bit behind with the eventual 2nd place Tynedale runner Richard Parker, Dave Wright from Heaton and Andy Parkinson who was eventually 4th. I shamelessly let the other 3 do all the work, particularly into the wind, having learnt from my generosity last year where I did all the work at the front of a pack, only to be unceremoniously dropped for the last 2. In my defence, the pace was a little bit faster than I was planning, so it would have been daft to go to the front to encourage them to maintain the pace. I didn’t want to drop to a more comfortable pace, as there wasn’t another group behind us to drop into, and the benefit I was getting from the pack made it worth sticking with.

We went through half way in 1:26:30 and at the top of the hill on lap 3 Andy made a move that resulted in my windshield being split apart with Richard going with him, and Dave Wright dropping off. That left me all own my own (aahhhhh), but at that point I still felt OK. It wasn’t until 21-22 miles that I really started to struggle, the mud started to become a real pain, becoming rather sapping. The wind picked up and I had no one to hide behind, I became aware that Davey Wright would be trying to pull me back and also Rob Wishart was behind me armed with a SAS style balaclava to hide his identity for some reason. I spotted a South Shields runner (David Wakefield) just up ahead, and tried very hard to reel him in, closing the gap to a few seconds, but it wasn’t to be, I probably left it too late. So I managed 7th overall, 3rd V40 and first VANEE runner.

Dave Young picked up 2nd V45, and Dave Rowe entered into a grudge match with Sumanth Nayak from Claremont who was in fancy dress, to make sure he beat in the first cow (we felt the comment about his udders were a little uncalled for though Dave). We had agreed before the race, that if Sumanth was approached by any frisky bullocks, we would have to forget the race in order to point and laugh………. I mean help.

Yet another great event that George Routledge can be proud of, fantastic and encouraging marshalls (just remembered I threw a whole cup of orange over one of them during one of my less successful water station stops, sorry about that) great supporters, and free massage (and cup of tea – I do love a nice cuppa) at the end. I made a donation to Percy Hedley in lieu of the massage as there was a dad who did the marathon with his son in a child jogger.

Thanks to Rob Kirtley for the photographs below. 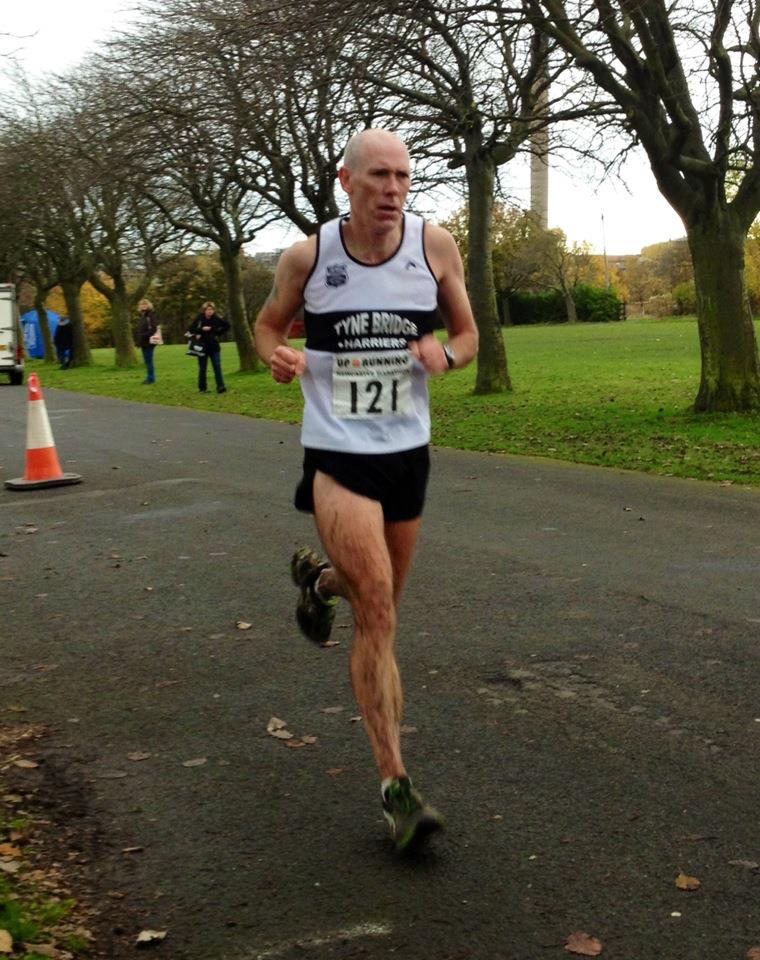 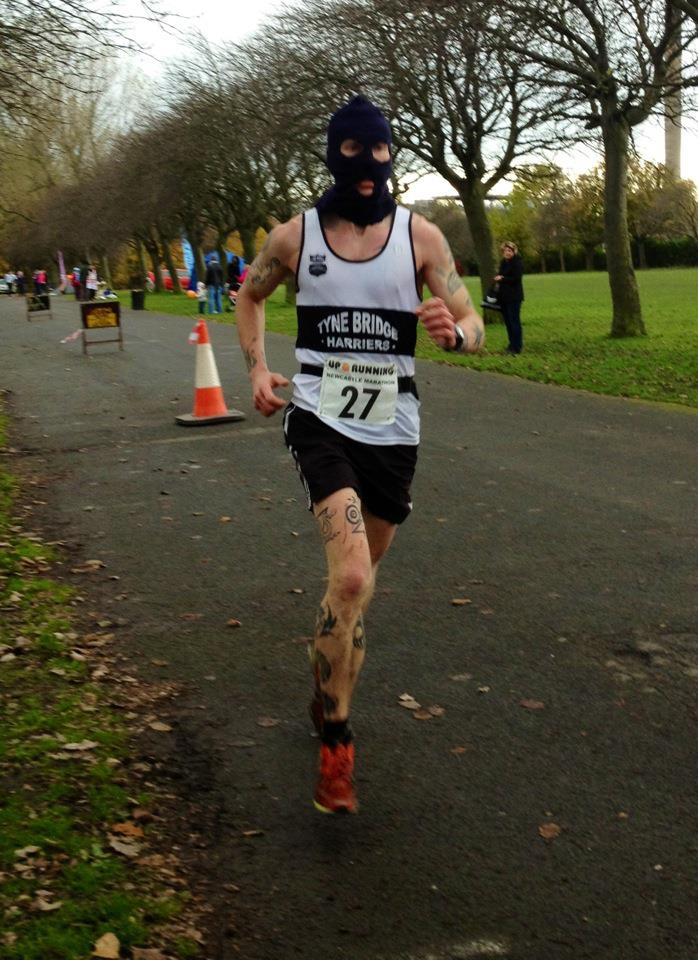 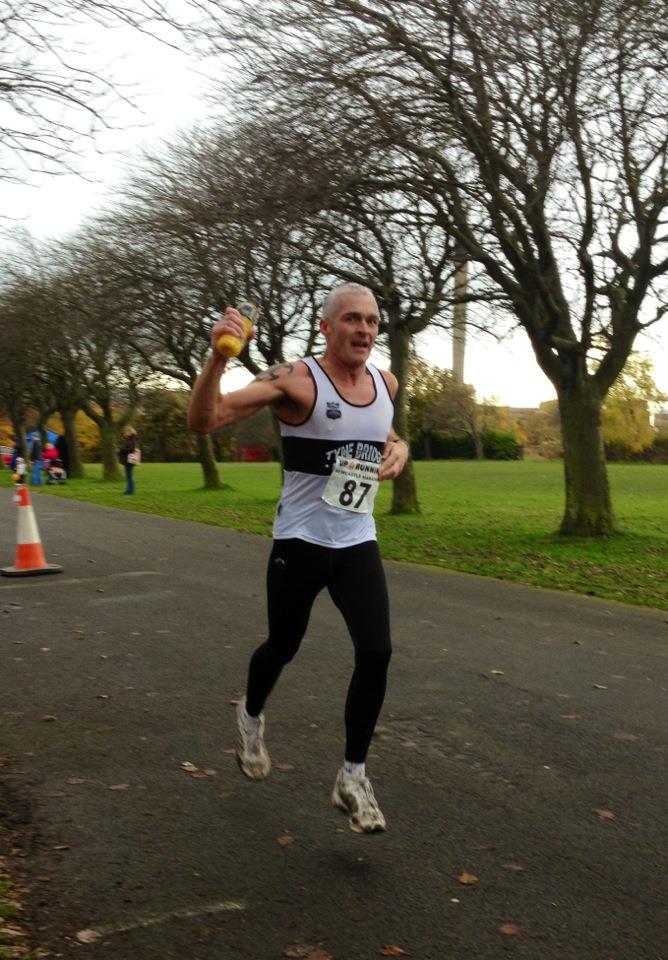 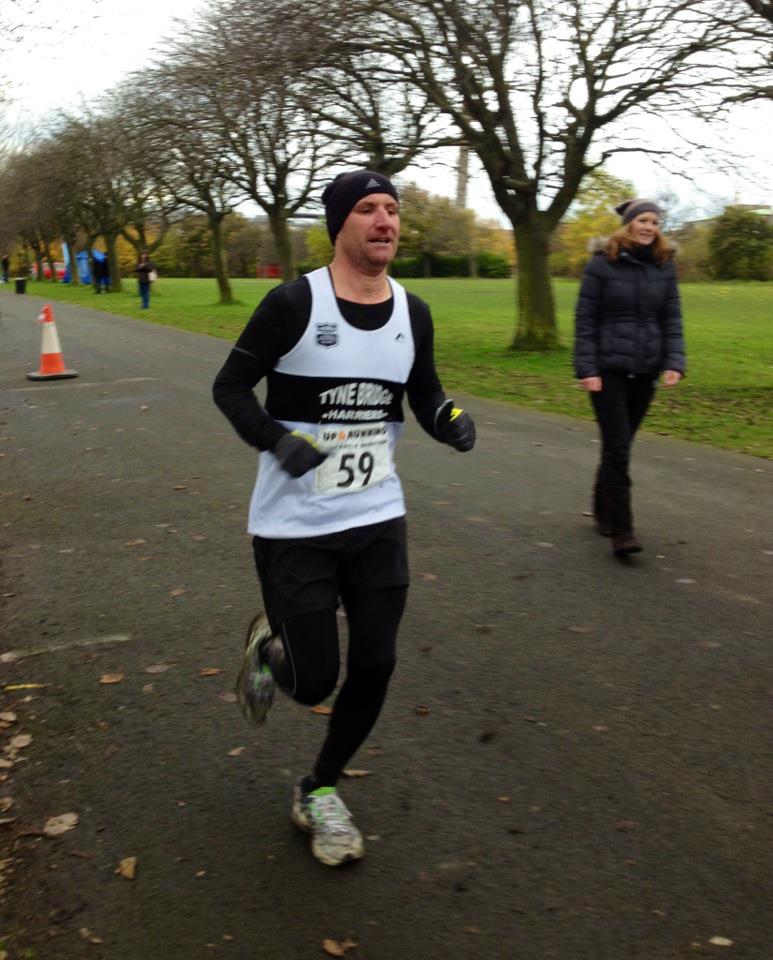 Permanent link to this article: https://www.tynebridgeharriers.com/2012/10/29/newcastle-town-moor-marathon-28th-october-2012/