Book Review: Why We Run, by Robin Harvie

Why We Run: A Story of Obsession
Robin Harvie
John Murray, £8.99

We’re all a little obsessed. Some more than others, of course—a quick look around any running club will tell you that (naming no names!). For Robin Harvie, the obsession was running the Foden had read Herodotus’s history of the marathon runner, Pheidippides, the foot messenger who ran from Athens to Sparta and arrived ‘the next day’ to get the Spartans onside in the fight against the Persians. Foden wanted to know if it was possible: 153 miles in one day. Foden completed the first run with a small team in just under 38-hours, and the Spartathlon was born.

I don’t know if the book was rushed out for a summer of Olympics, but there’s a great chapter on the history of both the ancient and modern Olympics movement—and stronger on the ancient Greek feats that were not for sport but a way of life. To win a race in the ancient Olympics did not get you merely a gold post-box in your home town. As Harvie tells us: “When a runner named Exainetos won a second successive victory in the stadium at the ninety-second Olympics in 412 BC, his native city of Akragas in Sicily presented him with an escort of 300 chariots pulled by white horses. A section of the city wall was knocked down to make way for his entrance.”

But then of course the original marathoner, Pheidippides, was supposed to have collapsed and died at the end of his run. So it’s not all good. 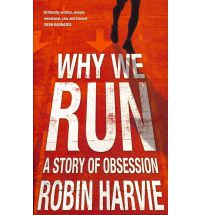 Along the way of training, Harvie writes a memoir of his life and family, and has a great humility for other people, particularly those who tackle great challenges. He is also intelligent and philosophical, mixing the story of running with the history of the Olympics, London, of the monks of Mount Hiei, with quotes from Dean Karnazes (ultra-marathon runner) Henry James (not) and Carl Jung to mention just a few. It’s an eclectic read, interesting and emotional, as well as deeply personal.

Harvie is good on the learning experiences of our sport, what our own club’s Kenny Mac calls ‘the disciplines and pleasures of running’. He knows at the end he “asked too much of running” – thinking one race would transform him as a person. Now he knows differently: Harvie dropped out of the Spartathlon at 85-miles, 17-hours into the race. That in itself is an amazing achievement. But one criticism I have with Harvie’s book is that it’s not edited well.Themes and ideas are introduced at the beginning of chapters and then never come back, leaving the reader confused. I’d also question if the book has what Harvie himself calls ‘the pearl of a story‘ or if it’s stretching out one amazing run a little too far–it gets slow in parts (in Scott Jurek’s book, the Spartathlon is one chapter).

It also digresses a little too much into, for example, Turner on railways and Dickens on the Thames, rather than telling a story of the human impulse to run. Finally, there’s a little too much internal monologue. While it might answer the question about why Robin Harvie runs, it doesn’t do enough to make the story wholly relevant for the rest of us.

Permanent link to this article: https://www.tynebridgeharriers.com/2012/09/14/book-review-why-we-run-by-robin-harvie/