5am early morning start and it’s down to the local car boot sale. Which, believe it or not, is perfect preparation to getting a PB in your 10k.

Don’t believe me then read on and I will explain.

Apart from the Great North Run, the Great North 10k had been the only race I had competed in before joining Tyne Bridge Harriers in March, so I was looking forward to doing it again and comparing times from last years race. Although I did the Tynedale 10k earlier this month (48:35) I was confident I could maybe better this time and beat last years GN 10k of 52:11

I’d arranged to meet Imran (Mohammed) and Steve (Compton) on the start line at 10am, by which time conditions were just about perfect for racing, and although very busy walking down to starting line I managed to bump into Imran, listening to his ipod/phone, and had a few brief words telling me he had seen Steve, I then let him get back into his zone (running & mental) wishing him good luck for the race.

Walking along to the Orange Zone passing the 200 Gurkhas all in their red shirts, blue shorts, I briefly saw another TBH member, Natalie (Mee), standing in the front of the white zone,  it didn’t take me long to find Steve in the Orange Zone, he said he had been there since 9:30 and had been up since 5am (the first sentence is all starting to fall into place eh) and had also been to the local car boot sale before getting the metro to Gateshead stadium!!, we agreed just before the gun that we would try and pace each other working on 7:30 min/miles which we guessed would get us a finishing time of 46 – 47 mins although also agreeing that if any one felt like they could go a bit faster to push on.

The gun/hooter went dead on 10:30 and as we were near the front it didn’t take us long to cross the starting line, unfortunately like other races I’ve done I always seem to go off too fast, sticking with Steve we weaved our way through other runners passing through the trading estate where the race begins down past Gateshead College and along past some new hotels that have recently sprung up, just before reaching the Baltic we notice Double D walking along the path, giving him a shout as we passed, he picked us out and gave us a wave. Further along and well into the first mile we eventually came to the Gateshead Quayside and passing the Baltic spotting Mickey Duff who gave us some great support as we passed. At this stage I was quite comfortable with the pace which was averaging about 7:15 min/miles as we headed under the Tyne Bridge down past the Swing Bridge we both were weaving our way through other runners, just after going under the High Level Bridge we met the lead runners coming the other way, noticing it was a three way race between the eventual winner Scott Overall, Yarod Hagos & Jussie Utriainen, with Ian Huspith from Morpeth Harriers not far behind, with the elite women containing eventual women’s winner Gemma Steel not far behind with other elite runners in between, not expecting to see any TBH this early on the return leg, I was surprised when Steve said there’s Keith, and it was, passing at some pace Keith Smith working out he was in about 14th place giving him a shout as he went passed I think he was as surprised to see us as we were him.

Just as we were nearing the King Edward bridge noticed it was the water point, this is were I made a error, I was not feeling thirsty and felt ok upto that point but for some reason decided I needed a drink so slowed to take a bottle, Steve decided ‘correctly’ that he didn’t need a drink by the time I had taken a few gulps, Steve was a few paces in front of me, mistake/school boy error no matter what you call it I felt ok upto this point and was in a good rhythm running with Steve, after discarding the bottle I never seemed to recover the same pace! Although Steve was still within catching point and was upto the turning point at 5k, my legs seemed to get heavier and Steve started to pull out a lead that I was never to regain, on the way to 5k and the turn we met other TBH in Shaun Brown, Andy Lisle & Chris Graham all looking strong on the return leg. Not needing to look at the Garmin I realised that my pace had dropped off from the 7 teens down to 7:30 min/mile pace.

The long final 5k on the return leg decided I needed to concentrate more and try not to lose too much time, but what really spurred me on was seeing and hearing fellow TBH on the outward side of the run to mention a few (apologies if I miss anybody) Natalie, Imran, Emma (Brannan) and Danielle (Rutherford), thanks it really did give me a boost! Before I realised I was back onto the Gateshead Quayside (missing out the shower, bottle of water slowed my pace didn’t want to risk anything else) once past the Quayside it was back into the final leg up and onto the trading estate, and finally down onto the cycle/walking path along the Tyne, the notorious hill looming in the distance, if the hill was at the start of the race I don’t think it would be as bad because its near the end just before the 9km marker it does sap the last bit of energy from you, its not  long or particularly steep, The massive speaker at the top didn’t help either with Bruce Springsteen and Born to Run blasting out, (apologies any Bruce Springsteen fans). So the last km and with what seemed scores of Gurkhas streaming past me I felt I needed to quicken the pace coming to the last 800 meters were I saw Double D again with some more great encouragement from him, Then finally into the Stadium, different to last year where rather than finishing on the 100 meter’s track we went around the running track finishing in front of the main stand, stopping my Garmin at 47:56, slower than I had hoped but still a PB from the Tynedale 10k by 40 secs and over 4 mins from last years Gateshead 10k. Meeting Steve after the finishing line was thrilled to hear his time was 46:00mins, an excellent 3 mins off his previous best. After getting water and the goodie bags, made our way outside where we bumped into Keith learning he had a time of 35 mins which is outstanding! Bumping into other TBH in Imran and Natalie both with excellent times but especially Natalie who doing her first 10k at 49:36!

So to conclude, what did I learn from this race? Well Tyne Bridge Harriers are the best running club by far, but that goes without saying. The fantastic support on the run and from the sidelines, but also personally if running at a comfortable pace try to keep that pace without any loss of concentration, i.e. taking on water when I did not really need to drink, and maybe get up a bit earlier (5am) and seek out the nearest early morning car boot sale, it worked for Steve ;o) 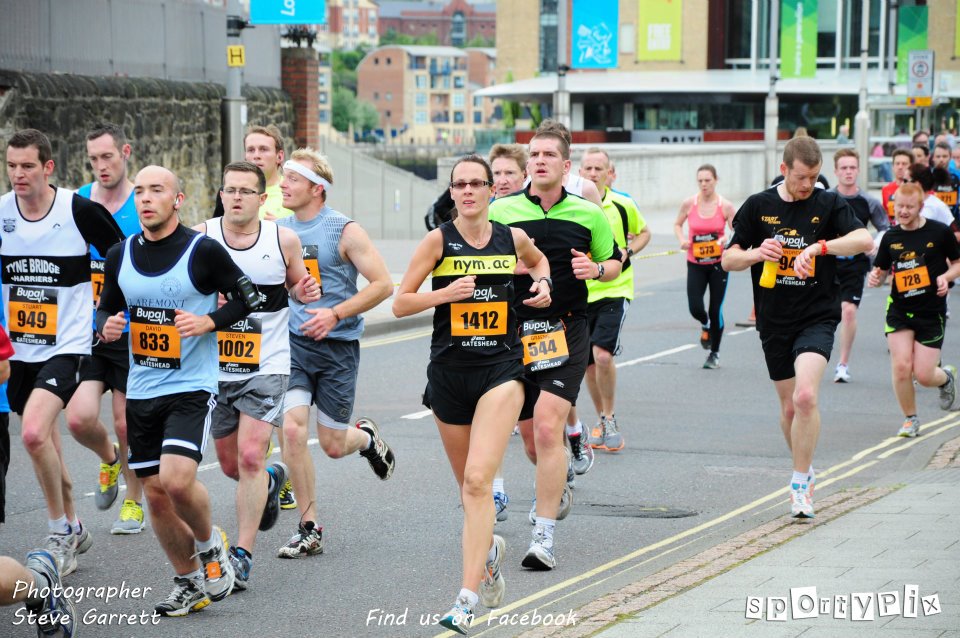 Stuart (far left) and Steven (4th from left) in action 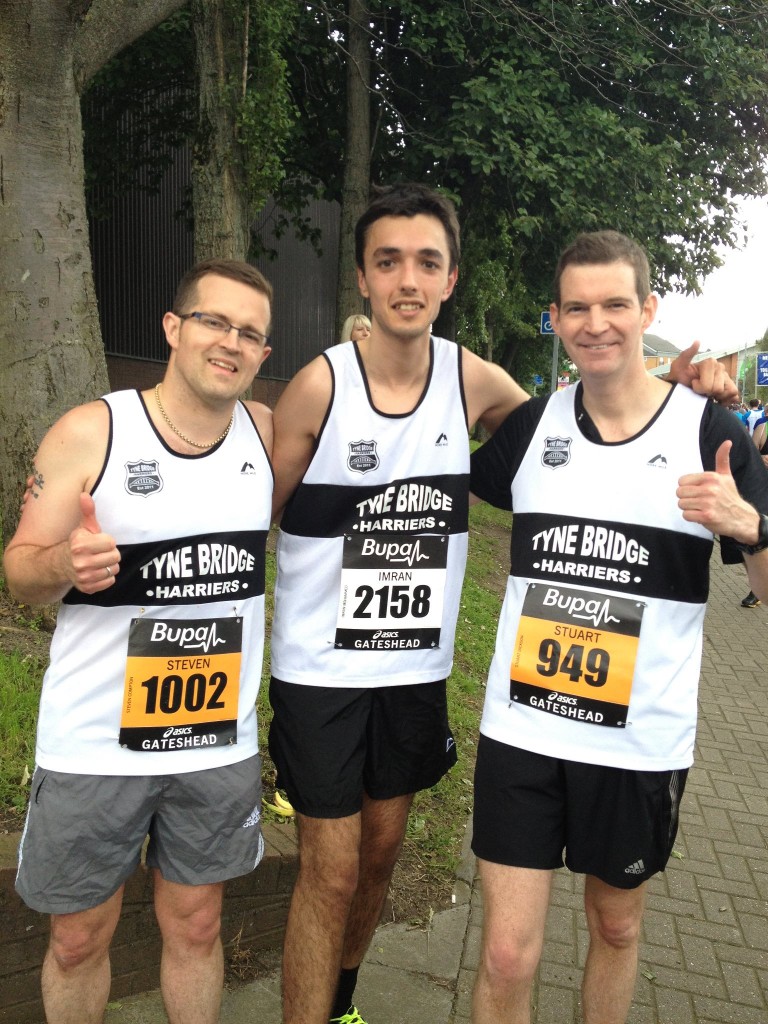 Steven, Imran and Stuart prior to race

Thanks to Steve Garrett (Sportpix) for the action photograph.

Permanent link to this article: https://www.tynebridgeharriers.com/2012/07/24/great-north-10k-race-report/