This is a race that I had been hoping to do ever since I first heard of it when I was travelling around the west coast of Scotland a few years back. A 30 mile race with a total ascent of 1,152meters on mixed terrain. It takes place in the area around Kyle of Lochalsh, just before the road bridge to Skye. I had been up there hill walking with a group of mates a few years ago and had found the terrain very challenging – very steep, very wet and very boggy – just what I like in a race! I had been keen to return and give it a go. Funnily enough we had already booked out Scottish break to escape to Sky over the Jubilee Weekend when I discovered that we would be in the area when the race was taking place…

So after a week of hiking in Skye, climbing in the Quiraing and meeting lots of very friendly locals I found myself at the start line in the village of Glenelg talking to Alistair Macpherson. The route can either be walked or run and everyone sets off together at 9am. We had been extremely fortunate with fantastic weather and this continued for the race day. 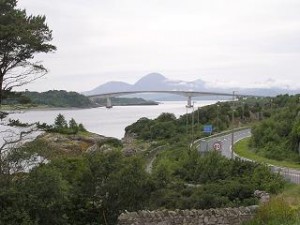 The route starts at the Village Hall and heads out along the coast road past the ferry landing to Skye. From there the route goes on to an undulating forest trail along the coast with amazing views out to Loch Alsh and the Skye bridge in the distance. Finally the path opens out and leads on to a pebble beach before heading inland again at Ardintoul (5 miles, the first check point). Then the climb starts in to the forest and bog. However, it has been very dry on the west coast this spring so the boggy bits were not as boggy as I had hoped, but still fun! The forest ends on a spectacular down hill run on track before levelling off on to the road at Totaig (3 miles, 2nd checkpoint) and the start of the road section along Loch Duich. This was pretty arduous in the hot sunshine but I was cheered up by three teenage girls who had set up a stall selling jelly babies to runners to raise funds for their local school. I stopped there for a quick chat, they were having a great time and insisted I did not have to pay for anything, just give a contribution! Walkers and runners had been talking about the jelly baby stall the night before at the Youth Hostel so we had all come prepared with some £1 coins for our jelly babies.

So the road continued, and continued along the loch shore until Shiel Bridge. I was wearing my fell shoes and my legs were suffering from the hard surface. However, I teamed up with a fellow runner and we mainly stayed together for the rest of the race, encouraging each other on and chatting about other Scottish races. Thankfully Shield Bridge (7 miles, 3rd checkpoint) came in to view, there was a water stop and the road section had finished – but now the serious climbing started! This is the main ascent on the route – 450meters up to Loch Coire nan Crogachan – a very hard slog in the afternoon sun. There were about 4 of us together at this point and we all had a banter to keep us going. Some of us were suffering cramps but we all encouraged eachother onwards and upwards! Finally we made it to the top and gained some cloud cover before a fun descent down to the Glenmore River and some bouncy grass, bog, a river crossing and in to a forest plantation and the 4th checkpoint (5 miles). This was really the only place where navigation came in to play – we had to find our way out of the plantation and keep an eye out for a bothy at Suardalan and then head past Loch Iain Mhic Aonghais to pick up a track to the valley of Gleann Beag. After a few miles of undulating track in drizzle conditions we were back on tarmac after the 5th checkpoint (5 miles) at Balvraid. I knew that this was the run in to the finish – another 4 miles on tarmac which was not easy after having already run 26 miles! But we pressed on and once back on the sea front of Kyle Rhea I knew that the finish was within reach. I was still chatting with the bloke I had met along the Loch side 20 miles back so we both pushed on and crossed the finish line together. What a relief!

The organisation of the race was fantastic – we were immediately presented with our medals and personalised finisher’s certificates!

All I wanted was a chair… and a slice of home made Victoria sponge cake.

Permanent link to this article: https://www.tynebridgeharriers.com/2012/07/24/lochalsh-dirty-30-race-report/