As a new feature to the website, members of Tyne Bridge Harriers will provide a personal account of what running means to them, and to those around them.

Kicking off this feature is Anji Close, aka ‘Face of the Race’, and as we find out from her blog, the path of a runner is never a smooth one.

A week of ups and downs

Having never done a blog before, I am aware that the following may numb your brain but as I’m hoping it will be therapeutic I decided to give it a go after a week of extreme runner’s highs and lows.

I’ve been struggling with injury since the end of February during which time I ran through a nerve problem in my right foot, only to pick up an ankle niggle in my left after one lousy return to club running in mid-March.  I stupidly ran through that niggle too to do the 6TownsX2 charity half on April 1st, followed by the NT10k on April 8th, which ended in agony. I was diagnosed with peroneal ligament sprain on the 13th which in layman’s terms is a knackered ligament tracking from ankle, through the heel up into the calf. I won’t bore you with the in-between but I started back after three weeks out and felt great right up until my first 5mile run back just three days later, last Tuesday. Searing pain, back.

So, in the week I was meant to run the Sunderland 10k after they had chosen me to be one of their “faces of the race”, I am once again out and devastated. Like all runners, I don’t deal with rest or run-bans well and I went on something of a meltdown. My plan had never been to run Sunderland as a race given the long gap in training but I was excited to have a go at pacing for Danielle Rutherford on course to smash sub-60.

In the same miserable week, I found out that inspirational marathoner Claire Squires who sadly died at the VLM had the same heart condition as me. This contributed to the epic meltdown and for the first time I seriously thought about just jacking it all in. I joked to my friends about becoming a swimmer. I hate swimming loads. One of my closest friends sees running to “real runners” as something that is born into us, it’s not a choice, it’s something you just HAVE to do. But the series of disappointments, the pain, the dodgy heart, all led me to do a great deal of soul-searching, and I actually said the words “I’ve had enough”. 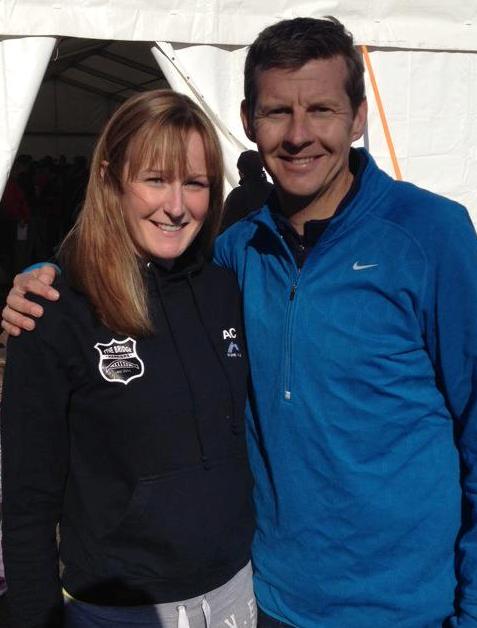 Fast forward to this weekend and I am so much more positive. I had the pleasure of spending time 1-1 with Steve Cram at the Marathon Of The North pre-show and he lifted me massively. He spoke to me candidly about my injury and talking to him and his lovely partner, ex-athlete Allison Curbishley, passionately about running reminded me that this really is something that is in me that I can’t just forget or give up on.

I spent today at the Sunderland 10k/Marathon Of The North and will admit to having several emotional moments, especially at the start of the 10k just thinking what perfect conditions they had and how much I would have loved it. But I know I’m part of a team now and this family needs my shouting and encouragement as much as they need people to run, and I’m so glad I was there. I am so proud of what ALL our runners achieved today, not just the pbs or the successes, also the few that had nightmares and just kept going. You all inspired me and reminded me where it was due that I can and I will be back soon.

Permanent link to this article: https://www.tynebridgeharriers.com/2012/05/07/runners-blog-anji-close/