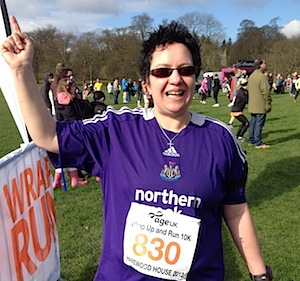 It was a beautifully sunny spring morning at Harewood House for the Age UK Wrap up and run 10k. There was just a slight breeze, which made it really pleasant conditions to run in.

Having only experienced two 5k races before, both very different in size, I was unsure what to expect in facilities, but the area around the start was well organized with a PA announcer, a first aid area, baggage storage, plenty of port-a-loos, a burger van and an ice cream van. Age UK representatives were giving out balloons and those inflatable sticks that you can bang together to make a noise to the little ones.

They had an organised warm up, which personally I’m not that keen on due to me having the co-ordination of your average house brick. While most people were having their mini-aerobics session I did my own warm up at the back, concentrating on getting my legs and back warmed up and stretched.

The race was delayed by about 10 minutes due to problems getting everyone onto the site, which they announced after the warm up. My brother, who had gone along to give me moral support, said one chap came running past him about 5 minutes after everyone else had started, dropped his bags by the back of the finishing area and just ran straight through, after obviously having some problems getting parked.

I chose this 10k as my very first one as it was advertised as a flat road race. I forgot that it was obviously the Yorkshire kind of flat, which everyone else in the country would describe as undulating. The PA guy had been talking about a hill at 7k, which we should save our energy for, but there was one at about 2k that had some stopping and walking up it. Luckily for me I had done the hill training session with Micky and Steve on Tuesday and so just kept running up it.

The road part of the run also turned out to be between km’s 8.5 and 9. The start was on grass and then onto the types of path you find in woodland parks with roots, stones and uneven bits all over. It was also really muddy in places. I’ve never run on this terrain before, doing all my training so far on pavements and roads. Had I known that it was going to be like this then I’d have at least borrowed some trail shoes! I found myself hopping about at places trying to avoid the worst of the clarts and at one point ran down the grass verge at the side, as it was the least uneven terrain.

However it was lovely scenery, and I got to the 5k point in 36 mins 42 seconds which I was delighted with. Just after the 5k there was a drinks station, and they handed out bottled water. Unfortunately they were in screw top bottles and not sports top bottles. I liked the sports top bottles because they always pass the water quality test. I quickly found out that I couldn’t run and get the water in my mouth at the same time, without giving my sinuses a good rinsing. So I slowed to a walk to just get a few mouthfuls on board.

6k saw another minor hill before the monster arrived at just after 7k. This hill went on for over a kilometre and was way steeper than the hill at the priory at Tynemouth. I ran for about a quarter of it, but my legs were having none of it. I decided to walk the rest, and keep my energy for the final stage. Even so it seemed to go on forever. I guess in Yorkshire it’s probably just considered as a slight incline but I’m sure there were mountain goats laughing at us all.

Once the hill was out of the way I started running again and reached the actual paved part of the run. I was able to make back some of the time I had lost walking up the hill at this point. The final part of the run saw us back into the field we had started at. As I approached the finish line their clock said 1hr 21mins and so many seconds and I initially felt disappointed that I hadn’t beaten the 1hr 20 mark I had set myself. However a quick glance at my Garmin showed me just over the 1hr 19 min mark and so I quickened my pace and stopped my watch as I went over the line at 1hr 19 mins and 51 seconds. I had beaten my goal time by 9 marvellous seconds.

After crossing the line I was given another bottle of water, a Mars Bar and a t-shirt. No medal (which I was disappointed about, as I like a good medal) but the exhilaration of knowing I had completed my first 10k in a great time for me more than made up for that. The only downside to the day was trying to get out of the venue. It took us over an hour and 20 minutes to exit, seriously I had ran the course quicker than it took to get out of the place! But they did have a service, which texted you your gun time and your chip time within minutes of finishing and my chip time exactly matched my Garmin time so points added for that.

It turned out to be a really pleasant day out and I would do it again, but would definitely invest in some trail shoes for next year.

Permanent link to this article: https://www.tynebridgeharriers.com/2012/03/20/harewood-house-age-uk-wrap-up-run-10k-report/