In the first race Lisa Walker was the sole representative for Tyne Bridge Harriers with the female impetus being focused on next weeks Cross Country in Prudhoe (pronounced PROOD HOE not PRUDE HA) Lisa who quietly went about her business finished in a very respectable time of 31.08, 23rd position and 8th in her age category.

The next race saw a zeal of runners bedecked in the now iconic colours of Tyne Bridge Harriers, black and white, and in Ron Murrays case, with his trademark “black & white with a little bit of red” shorts

The mens course was three outer laps and three inner laps consecutively. It was no Alnwick course but credit to the organisers for making it such a challenging course. the first lap was slow, nobody really knew the course and it was open to misdirection so tentativeness was the order of the day. Dave Moir was leading the montage of vests out on the first lap and after this the outright winner Brian Rushworth took control and pushed on to lead from then on.

Such is the competitiveness of Veterans running a sea of runners were chasing the leading three runners down with the calibre of Ken Bell, Tommy Brannon of North Shields, Les Smith of Heaton, Dave Moir, Rob Hand and Paul Hilton in hot pursuit.

In the middle of the race there was a lot of individual battles ensuing for the various age categories which were all in 5 year increments.

After the race it was back to the Jarrow and Hebburn clubhouse where athletes were still unaware where they had come in their individual categories. I was standing next to Ron Murray and we waited eagerly as the results came out. 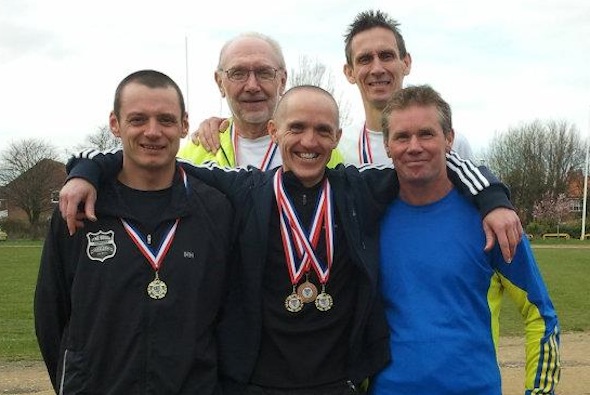 What a day for our club that is growing from strength to strength.

Special mention to Dave Embleton who is back enjoying his running again and will go from strength to strength this year.

Athlete of the day however goes in my opinion to Ron Murray who beat adversaries who had beaten him well at Alnwick only the week before. Well done on you being the V60 North East Champion.

Focus now is geared towards Prudhoe this Saturday so lets get as many of our athletes galvanised and do everything in our power to get both our teams promoted in our first year of competition in the Harrier League.

Permanent link to this article: https://www.tynebridgeharriers.com/2012/03/19/vaa-ne-veterans-xc-championships-2012/