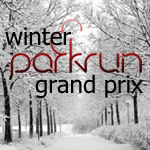 This Saturday (10th March) sees the final race in the TBH parkrun Winter GP which started back in October last year.

The series of six races, runs in conjunction with Newcastle parkrun, and the club member with the highest combined points total at the end of the series will be announced the winner.

The current leader board looks like this (see below) and its now a clear two-horse race between Dave Appleby (V45) & Graham King (V55). Both athletes being the only two who have so far taken part in every race of the series. Will Dave Appleby hold on to that 30 point advantage? Dave has an average score of 78.53 over the series compared to Grahams average of 73.73.

Saturday will be the decider of the very first TBH Winter parkrun GP and one thing is for sure, both Dave & Graham will be at the very front of the starting line-up to get the best start possible to nab those all important points

It would be fantastic to see as many Tyne Bridge Harriers as possible turn out in club colours to take part in this final race of the series.

Please make sure you are registered with parkrun as a Tyne Bridge Harrier and you have your valid barcode with you.


parkrun is sponsored by

Permanent link to this article: https://www.tynebridgeharriers.com/2012/03/07/tbh-parkrun-winter-gp-race-6-coming-up/