Following another excellent & successful day at NEHL Wrekenton meeting on Saturday, we have another two fantastic race reports that have been sent in.

First up Janine Swail describes her first experience of Cross Country Racing and the North East Harrier League for the ladies team. 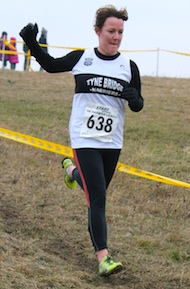 You only get to be a XCTBH-virgin once and today was my day for it! Having joined the mighty TBHs a few months now I decided at Christmas that I was going to try this XC business in the New Year to find out what I was missing out on! The initial bonus is you get to buy a new pair of shoes without feeling guilty, so last weekend I treated myself to a pair of spikes and that was me committed!

However, I very nearly did not get to wear my luminous yellow flying machines as the main debate when we rocked up to the TBH tent was whether it was wise to wear them or not, given the freezing cold temperatures and rock solid ground. I was glad of this dilemma distraction as it stopped me worrying about the actual race ahead. I think I was even a little bit nonchalant about it all as I reasoned, ‘It’s only 3-4 miles, you do more than that a few times a week, you’ll be fine!’ This is not helped by the false sense of security that ensues when Denise, Jude and I watched the men do their first lap.

The black and white vests were out in force and the lads made it look so easy as they flew up those first couple of hills. Marc Fenwick was the first TBH home, storming in, in third place, impressive stuff.  As I started to kit-up for my ‘debut’ I had decided I was sticking to my trainers, but after more of the men came home they wasted no time in strongly urging us ladies to get the spikes on, and boy am I glad I listened (to a man for a change ☺) and swapped footwear in the last minute.

Ever since I joined TBH – friendliness, encouragement and support has been in abundance, but this was no more strongly felt at the starting line as the 10 TBH ladies wished each other good luck, gave each other last minute advice and Denise, as captain provided a final focus with a last pep talk. I had discussed ‘strategy’ with Jude and Denise in the car earlier, who were the women responsible for putting me on this starting line, but as the gun went off I wasn’t resentful, I was just glad to be taking part.

So we were off….as you can probably guess I had no great strategy I just wanted to get round, without slipping. I am more of a plodder than a runner and one of the first things this virgin realised was ‘this terrain is hard to run on!’ So I plodded and plodded, taking each hill as they came and not worrying about speed. I found myself focusing on the ground much more than I normally do when I run as I worked out where was best to dig my trusty new spikes. This was all new to me, and I quickly concluded that this 3-4 miles was going to be the hardest I have ever done. The first lap could not come quick enough for me, as I reflected, ‘thank god, we’re not doing three!’ I looked ahead at the impressive women in front of me and I wondered ‘Will I ever get up there?’ Running for me is not about competing, it’s about enduring, improving and enjoying and as I finished the first lap I was pleased that I was actually having fun because I was smiling. Enjoying yourself is made all the more easier when on every hill, around most corners there was someone standing cheering you along, shouting ‘go on TBH’, ‘keep going Janine’. My pace will never break any records, but just a few words of encouragement from coach Davy, Rob and Sparrow, ‘Try and catch the pink hat ahead’, ‘Let the hill take you down’, kept me focused and kept the ‘mind-gremlins’ at bay.

As I figured I was on the home straight I was pretty sure I would be placed….in the last 10, but I didn’t mind. I waved to Danielle and she waved back, both us knew we were nearly there. The other TBH ladies were home and dry with Carolina, Elspeth and Joy finishing well up the pack and doing us proud. Crossing the finish line I didn’t break into any tears like I did after I finished my first half marathon. I didn’t feel particularly pleased with my performance, quite honestly, I found this new experience tough. But I did find myself thinking, ‘I can do better next time….’ So maybe a little bit of me competes and yes, there will be a next time…..

Wrekenton was to be our 4th harrier league out of the 6 altogether. I have done this course before so knew what to expect although for most of the Tyne Bridge Army it was to be their first cross country race here. With the icy conditions and hard under foot we were all deciding what to wear, spikes, cross trainers or flats or what someone suggested all 3 ???? I decided on spikes and after the race we all agreed that spikes were best. None of us wanted to leave the warmth of Su and Rob Kirtley’s Hospitality tent but the work had to be done! We had 1 minutes applause at the start of our race for the late, great, Chairman of Wallsend harriers Terry O’Gara.

The slow pack went of with Marc Fenwick in a small group of 4 or 5 at the fore with 9 other TBHs following on determined to run there best. The medium packers were next 2min 30 sec later in which the remaining 8 of us ran in, Jack Neeson is our only fast pack runner at the moment but he was back in Northern Ireland visiting family. I would say the Wrekenton course is harder than Blaydon but easier than Prudhoe and maybe an par with Cramlington. With conditions hard underfoot the race was ran quicker than normal, I averaged 6.09 miling for the 5.78mile distance which is exactly the same pace as Northerns a fortnight ago.

In my race I could see my fellow team mates/rivals Keith Smith and Dave Moir throughout,I had also figured it out that I had to get passed Mr Moir to be 1 of the first 6 from TBH thus be a counter for the team, sometimes thinking I was closing on Dave Moir then sometimes thinking he was getting further away from me, in the end I was 8 secs behind Dave and 23 behind Keith so I was happy with my run even though I was 7th counter I could not have given it more on the day. When your running from the medium pack unless your super quick you don’t get to find out how race at the front went, I knew we had done well though when I seen Marc, Sparrow, Gareth Huxley & Mike Norbury all chatting amongst each other. I then found out Marc had finished 3rd overall with Gareth thinking he had got a top 20 position and Mike reckoning just outside top 30 for him. Perfect positioning !

When everyone had finished it was great to get back to our tent were Su was already pouring the Coffees. It was another superb performance from Tyne Bridge Harriers and after Micky Baker give me the results we found out that we finished in 3rd place which by Apples’s calculation may even go to 2nd as they had Keith as a non scorer.

The run of the day goes to Marc Fenwick, superb performance who came 3rd overall. Sparrow also pulled another 1 out of the bag (get more bags please Sparrow).

Special ‘well done’ to Stephen Hargreaves getting back to racing, Scott Mcnab who was representing TBH for the 1st time and also Richard Tailford who despite injuries keeps on turning out to support us.

Permanent link to this article: https://www.tynebridgeharriers.com/2012/02/14/nehl-wrekenton-report-results/