Dave #4 already and we hope you are enjoying the festive fun. In the build up to the big day, we are celebrating everything that is DAVE in our 12 Dave’s of Christmas. Today we have managed to get a few words from our ‘very shy and retiring’ TBH Head Coach .. Mr Dave Anderson 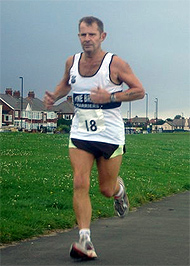 I’ll start in the eighties when I played a lot of football. I was pretty fit, but getting on in age so I thought I’d pack it in. So I got a bit chubby instead!

So onto 1990 and I had a few mates who ran for a club and they persuaded me to go down, and like everyone, I thought they were all fantastic runners. But, instead, found that I could run with them and I was hooked.

My first run for the club was the Redcar Half, which I managed in a respectable 1hr 27mins and felt I could go on from there to bigger and better things.

Many races later, taking in 6 stage/12 stage relays, vets champs(gold medal) 34mins, 10k 76mins, 1/2marathon, many NE/Northern/National x country champs and a 100mile world record with 9 other guys. I am very proud of my achievements.

But now I move on to another chapter in my running life with Tyne Bridge Harriers, where there are some very, very good runners. More importantly, I am now coaching people who want to learn to run, and from that onto racing and gaining pb’s they never thought that they would achieve.

I just hope that some of the runners at this great club of ours can go onto enjoy their running as much as I do.

Tune in tomorrow for Dave 5

Permanent link to this article: https://www.tynebridgeharriers.com/2011/12/17/the-12-daves-of-christmas-4-dave-anderson/