At Tyne Bridge Harriers, we have alot of Daves. So we thought it would be a nice idea to celebrate everything that is Dave this festive season with a profile of each of our special Athletes called Dave in

The 12 Daves Of Christmas

Kicking off this seasonal feature, we have Dave Daniels, sprouting off about his past glories and his hopes for 2012. 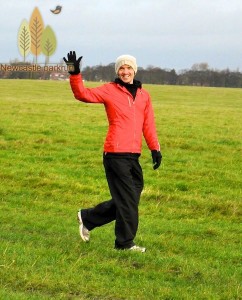 The first time I put on a pair of trainers to go for a ‘proper’ run will live long in my memory.

I was 27 years old, reasonably fit (or so I thought) and had decided to join a colleague on his daily run home after work. As my colleague was in his early 50’s and I was still a young slip of a lad, I was hoping he wouldn’t be stopping too many times as I didn’t fancy being late home for my tea.

After changing into his running gear, my colleague did a few stretches and then declared he was ready to run. I changed into a pair of Newcastle United football shorts, a casual polo shirt, fastened my favourite pair of Adidas Samba trainers and decided the stretches looked silly. I was ready.

For a while things were going great. My running partner was telling me all about his life in a running club, how he still managed to run about 30 miles a week and how running still played a great role in his life. But in the short space of leaving the office and getting 1 mile along the road something terrible had happened. The life had been sucked out of my body and I could hardly breathe, let alone run another step. Yep, after 1 measly mile I had to bail out and walk home the rest of the way

Because I know first-hand what a challenge it can be to persevere when everyone else is racing off in the distance, I have enormous admiration for anyone willing to take that first step on the running ladder, and if I had to pick one highlight from the past year, it would be being part of a club which has helped so many first time runners achieve their goals and ambitions.

It’s a bit cliché, but the London Marathon has to be my favourite race. The crowds, the famous landmarks and the fantastic organisation all go together to form, in my opinion, the best Marathon in the world.  The fact I ran a PB there in 2011 doesn’t do it any harm either

My best race occurred in August 2010, at the Morpeth 10k Road Race. Since taking up racing, I’d always been a 36 minutes 10k runner, whether it was a few seconds under or a few seconds over. But in 2010, during a golden spell of running, I managed to record three sub 35 minutes times for 10k, the first (and most special) was the Morpeth race. Something I will value forever (at least until I break 34 minutes).

I’ve got two hopes for 2012, the first of which is Tyne Bridge Harriers continues to grow from strength to strength, and the popularity of the club is matched with race success.

My second wish is more personal, and is for a PB in the next year. 5K, 10K, not bothered. Just one PB to show I’ve improved over the year and old age hasn’t caught up with me yet.

Come back tomorrow for the next Dave of Christmas

Permanent link to this article: https://www.tynebridgeharriers.com/2011/12/14/the-12-daves-of-christmas/