Having joined Tyne Bridge Harriers in September 2011 Mark Allison has not only proved that he is a competitive club runner but he also proved to be a real down to earth guy, pitching in with a vast array of raffle prizes, free samples of cherry juice and running apparel as well as being a regular at the Harrier League.

In November Mark announced to Real Radio listeners that he was going to run across Australia in 2013 from West to East, from Perth to Sydney finishing at the world renowned Bondi Beach. This amazing feat for charity has quite rightly got Mark the acclaim that he deserves and he has fast become a media darling. 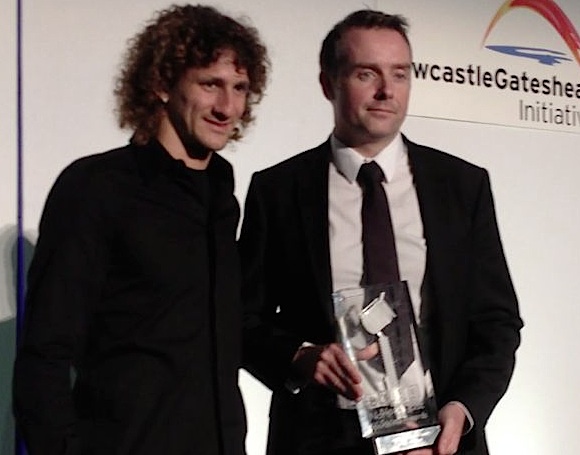 This week Mark won the prestigious BBC North East Sports Award of being the ” Most Inspirational Sportsman in the North East“. Mark a life long Newcastle United fan was presented with his award by Newcastle Captain Fabricio Coloccini.

2011 has proved to be an amazing year for Mark & Tyne Bridge Harriers will support him in every way we can to get him hitting the ground running for his run in 2013.

For more information on the amazing work that Mark is involved with, please visit his website at www.rungeordierun.com

Permanent link to this article: https://www.tynebridgeharriers.com/2011/12/14/mark-allison-run-geordie-run-wins-bbc-sports-award/