An eventful weekend of racing started with two parkrun events taking place in the North East.

We had 8 club athletes taking part in the 3rd of our Newcastle parkrun Winter GP races on Saturday.

Points are calculated using the Age Grade %. The athlete with the most points at the end of the series of 6 races is deemed the Winner. Current GP table will be published on here soon.

Congratulations to Cath Amos & Chris Parkin for recording new PB’s on the 5K course. Cath knocked 15 seconds off her previous recorded time while Chris sliced off 35 seconds from his previous course record.

Well done to all the Newcastle parkrunners

There are sets of photographs from the 99th event on Facebook

The newcastle parkrun was won by Conrad Franks of Gateshead Harriers in 17:01

Meanwhile, in Middlesbrough, Tyne Bridge Harriers were causing a bit of a storm on the results table at Albert Park.

Jack Neeson, Sparrow Morley, Rob De’Giovanni, Kenny Mac and future TBH star Adam Simms made the journey down the A19 to take on the super fast (& accurately measured) 5K course with the intention of returning with new PB’s. 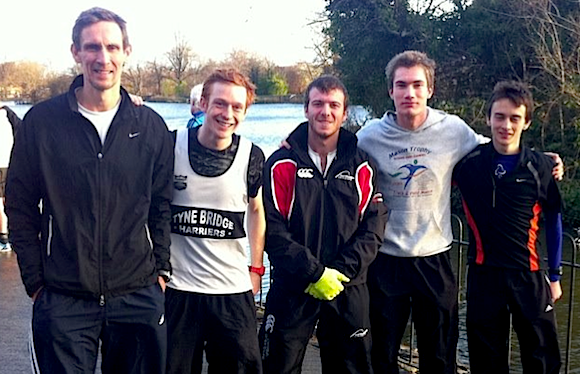 With the lads placing in the top 4 of the results and Adam placed 6th, it was a momentous day for TBH at Middlesbrough

The ‘Flying’ Sparrow Morley knocked a massive 32 seconds off his previous 5K time to record a brand new PB. The storming of the top of the results table also meant that Jack, Sparrow & Kenny all took 1st in their respective age categories too.

Well done lads on a fantastic set of results

Full results from Middlesbrough can be found HERE

.. and then….. click here to find out what happened next !!
Well done to everyone who took part and a huge thanks to the parkrun Volunteers who made the race possible.