Natural Hero to the Rescue !

Mo Farah – Champion Of The Tyne

Leodhais Macpherson is Tyne Bridge Harriers youngest but yet one of the oldest members. His idol is Mo Farah, the World 5000 metre champion and without doubt the most accomplished runner the UK has known for many a year.

It was 2009 when Mo was pipped on the line by Andy Baddeley in the 2 mile Quayside race but straight after Leodhais was lifted over the security barriers by Uncle Mo and the little man with the big heart took his running vest off and placed it on Leodhais. The big occasion being chronicled by Bill Mcguirk in the local newspapers the following week.

2010 by Mo Farah’s standards was not his best year and Leodhais and dad were so disappointed to see Mo being taken to hospital after the European Cross Country Championships in Dublin. 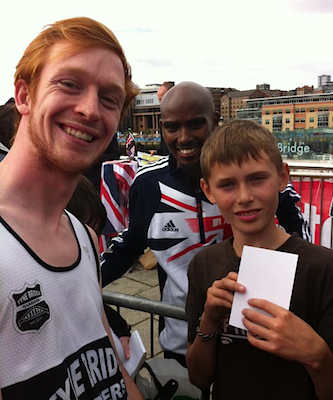 Having followed Mo Farah since our fateful meeting it was with sheer delight that Mo Farah came into his own in 2011 bolstered by the stewardship of Alberto Salazar and a relocation to Portland Oregon catapulted Mo into arguably the best distance runner in the World who is more than capable of getting gold in London in 2012.

Well the Newcastle Quayside City Games of 2011 summonsed Mo to Newcastle/Gateshead once again and Mo did one better than 2009 when he romped to victory in front of a record crowd. Mo quite rightly after his Dageau exploits is now receiving hero status and it was humbling to see in this age of Prima Donnas and Charlatans, Mo taking at least an hour to wade through his hero worshippers and autograph hunters. Leodhais queued and finally received a signed picture from the legendary Mo but he was determined to get Mo’s UK vest that he wore for the Quayside race.

Mo ” Hallo Leodhais, my you have grown, I can’t believe it”
Leodhais ” Thanks very much can I have your vest please”
Mo ” Of course you can” 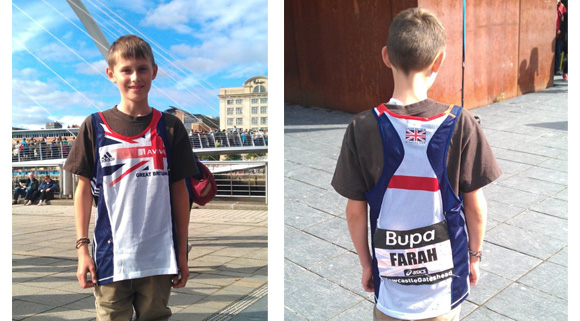 Mo then wrestled off his UK vest and handed it to Leodhais with his name tag still on the back before leaving the venue in a chauffeur driven car.

Tyne Bridge Harriers would like to thank Mo Farah for being such a gentleman to their youngest member.

Mo Farah won the two mile race on the Quayside of Newcastle/Gateshead yesterday in a time of 08:37. A superb finish to a busy season

Permanent link to this article: https://www.tynebridgeharriers.com/2011/09/18/mo-farah-champion-of-the-tyne/