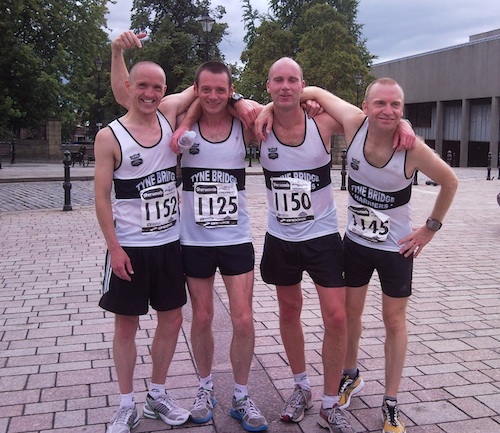 After some pretty dismal performances at the recent Morpeth 10k Road Race, Sean Kelly, Paul Hilton and I decided to enter the Darlington 10K race in an attempt to right a few wrongs. For Sean, he simply wanted to finish the race after pulling out at Morpeth, whilst for Paul and myself, we just wanted to run bleeding faster. Completing the group of entrants for the Darlo 10K were Chris Meek and Dave Embleton, each hoping the other would pull them round in a decent time.

Unfortunately, the day didn’t get off to the best of starts when Dave had to withdraw from the race due to an illness in his family. However, to offset that bit of bad news, the running quartet were delighted when they found out a small band of club members (Rob & Sue Kirtley, Marc Fenwick and Ron Murray) were planning to travel to Darlington and offer their support during the race.

Although I had ran my 10K PB at Darlington exactly a year ago, and knew what to expect from the challenging 2-lap course, I nevertheless still made my way down to the race with a great sense of trepidation. This was largely due to having volunteered as a 18 minute pacer at Newcastle parkrun the previous day, and then trail in with a disappointing time of 18m 11s, having giving my absolute maximum in difficult windy conditions. If I couldn’t get under 18 minutes for 5k, I feared the worse running 10k.

After a brief warm-up it was time to line up in the starting area, and unsure of how I would run, I settled for a spot 4 or 5 rows back from the starting line, just a few places behind Paul. As the hooter blew, and the runners made their way through the streets of Darlington, I quickly settled into a good rhythm and surprisingly felt pretty relaxed – probably because there wasn’t the undue pressure of being part of a relay team or running as an event pacer.

Conditions were ideal for running, with light rain keeping the competitors cool and hardly a breath of wind to be felt around the course. The strong turn-out by the local residents also made for a great atmosphere, ensuring the runners had plenty of encouragement throughout the race.

At 2k the race reached the first of two steep ascents and, without sounding blasé, I literally cruised up it, managing to maintain my pace and gain a few race positions in the process. Start of Lap 2, and spotting the TBH fan club at the side of the road, I couldn’t help but run over and high-five them (as you do) before continuing on my way. I have to admit, running up the climb the second time was no where near as enjoyable as the first, far from it, but having got to the top without stopping – a minor celebration in it’s self – I had the satisfaction of knowing the worse was over and I just (!) had to run the remainder of the race as fast as possible.

Entering the town centre for the final 200 metres of the race, I glanced at the race clock and was bewildered when it read it 34 minutes. I knew I had been running well, mainly because of the calibre of runners I had been racing against, but never had I expected to get around this sort of time. As I ran up the finishing straight I saw the clock tick over 35 minutes and it was now a matter of how low in the 35’s would I get? Remembering to stop my watch as I crossed the line – you’ll be surprised how many don’t – I looked at the time of 35.10. Un-ber-leave-able!!

However, if I was pleased about my result, then I was even happier when I watched Paul and Sean come across the finishing line a short time later. All of Paul’s recent hard training had came to fruition with a time of 35m 59s, a massive 45 seconds off his last 10k time. Whilst for Sean, his time of 36m 32s meant he had exorcised the bad memories from Morpeth and could look forward to a promising autumn race season. Completing the quartet of Tyne Bridge Harriers was Chris Meek, finishing in a time of 40m 01s, yet another strong showing from one of the club’s most improved athletes.

Incidentally, the race was won by Tyneside-based Ethiopian, Yared Hagos in a new course record time of 30.06 – smashing the previous course record by 20 seconds – and there were over 1000 finishers in the race.

Permanent link to this article: https://www.tynebridgeharriers.com/2011/08/17/darlington-10k-report-results/