TBH Member of the Month: January 2020 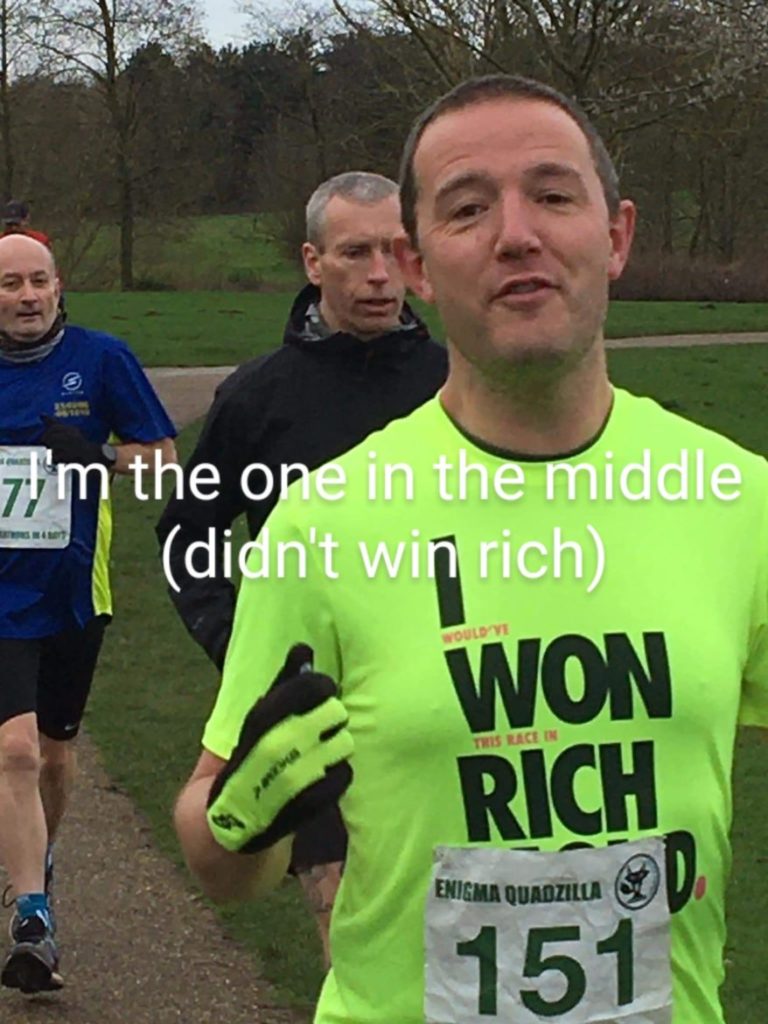 QUADZILLA (not to be confused with Godzilla, Hogzilla or Bridezillas) is a low-key yet *monster* event of 4 marathons ran on consecutive days, Thursday to Sunday.

Organised by Foxy Davy of Enigma Running, you *can* enter any or all of them but if all 4 are completed your 4 medals fit together AND you get an event hoody top… So all 4 it had to be then!
The course is seven laps of Caldecotte Lake in Milton Keynes. There’s a mix of paths, all perfectly run-able and no big hills – although it’s not flat. 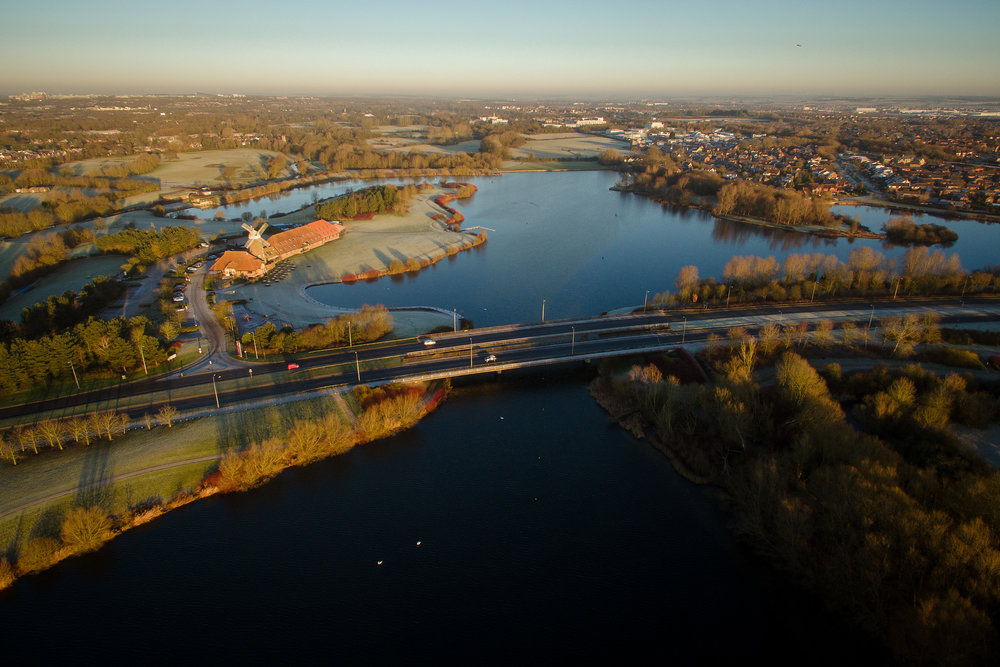 I travelled down with Kerry Barnett of Vegan Runners and we were the only ones from the northeast – most of the 73 entrants were from the south or midlands but there were a few Irish, un Francais et un Americans.
There’s a Premier Inn lakeside and most runners stay there, however Race HQ was a gazebo on the course. 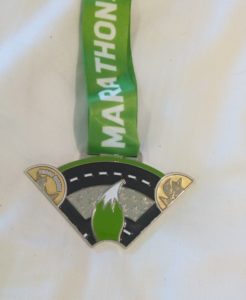 Frosty start that got sunny later.

It’s a beautiful place to run, with trees, grass and water all around. Even where houses are close, they’re nice houses.
I really like some Shinrin-yoku, as the Japanese say: Forest bathing. Get out into nature and it’ll do you good!
Ducks, swans, cormorants etc in the water and sometimes you see herons and even an egret that is unusual for Britain!
I was running ok but wasn’t happy with my shoes – they were stiff and clumpy and I decided to wear different ones the next day. Suddenly a woman ran onto the course saying she wasn’t taking a shortcut, she wasn’t in the race! Glad of the distraction, we chatted for a lap before her run route took her off home.
Result: 17th finisher in 4:12.40 (in the good old days some maras were sub 3, but in the lyrics of the Fine Young Cannibals “I’m not the man I used to be” 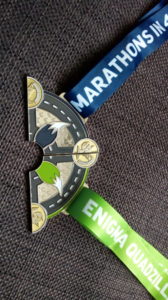 Soon after the start, things would settle down and I’d find a pace that worked. A cruise control and mindset where I didn’t care who I passed or who passed me – there’s a long way to go…

Kerry was running with Andy from Devon. They were “effing and Jeffing”. Jeffing is where you deliberately run/walk as a long term strategy. The Jeff Galloway Method.
You might run 4 minutes then walk 1 minute, and repeat.
Or 8/2 or 2/1, whatever suits.
Effing is the words you use when you’re tired and sore!
I didn’t drink anything on the first race, not on purpose but I thought I’d see if I could do it again (don’t try this at home folks!). I used to be good at running in heat but somehow lost it, so obviously dehydrating myself is one way to get it back?!
Second mara done quicker than the first, so I was right about the shoes!
Result: 9th finisher in 4:03.54 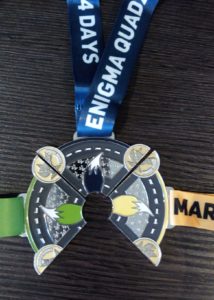 Every morning there were a few more missing from the start line. Injuries, fatigue…

So who does these things? Well, most of the runners were in the 100 Marathon Club and many of them had done 200, 300 marathons….one of them was doing her 700th that weekend and the American guy had a 1000 marathons t-shirt on! It’s got to be an expensive hobby with a lot of travelling and maybe avoiding your family. The American was said to have “divorced well!”
Doesn’t mean they’re all fast runners – I was finishing in the top ten or top twenty and as the laps went on I’d pass more and more people effing and Jeffing…
Kerry and Andy had a tough day. There were tears from at least one of them!
If they reckon you’ve got a sense of humour, when you have two laps left to run the marshals tell you with a two-fingered salute!
Less controversially they ring a bell when you go through for your final lap which was a very welcome sound. My cruise control tactic was working well though and I was feeling fine.
Oh, and, my lady friend from Thursday joined me for another lap and chat (I’ve still got it!

)
Result: 12th finisher in 4:15.36
Day 4 – Marathon 4:
The weather was forecast to be somewhat different…. Storm Ciara!
No gazebo today, Race HQ was moved under a bridge for shelter. It was blowy alright, sometimes we were leaning right into it and at other times you enjoyed it boosting you along (with some near misses at the water’s edge!). Rain wise it was an equal mix of no rain, rain and lashing rain!
As always, some people had entered only one of the marathons and marshals said “awww, you getting passed by one-day-wonders?”
Still no drinking water for me and I just kept running as steadily as possible. My forest-bathing was weather stricken as most of the wildlife were sheltering. A couple of trees had been blown down, but luckily not on the course…
The race director, Foxy, said he wasn’t going to enforce cut-off times today as long as people were making an effort!
I was glad of the two-fingered salute, very glad of the last-lap bell and very, very glad to “sprint finish” at the end!
Result: 15th finisher in 4:21.10 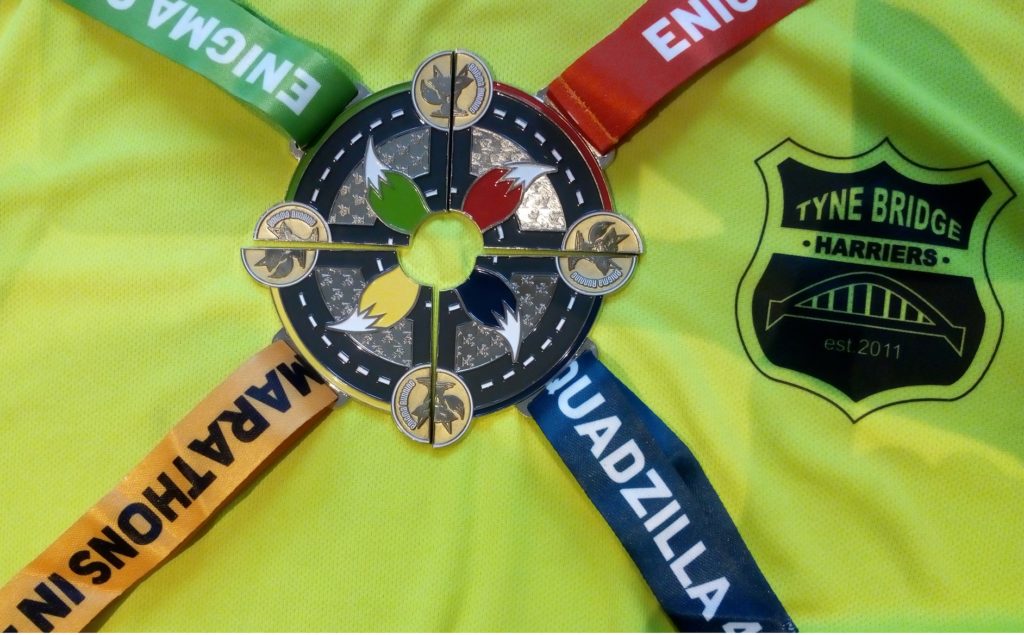 Medal 4 for the complete set

Kerry and Andy were sore and suffering but getting round with grit and determination. Everyone had liked their finishing tactic of getting a phone out and playing the Rocky music (fanfare

https://youtu.be/ioE_O7Lm0I4) as they ran in…
So as we waited at the finish line we got the music ready so they wouldn’t have to! Iconic stuff as they came around the corner and under the bridge!
Medals and hoodies all round.
Quadzilla: 73 started but only 54 finished.
Next day I felt fine and could definitely have ran another one!
I really enjoyed the event and was lucky it went so well for me.
In the words of Rocky Balboa “It ain’t over til it’s over”

Permanent link to this article: https://www.tynebridgeharriers.com/2020/02/11/enigma-quadzilla-race-report/