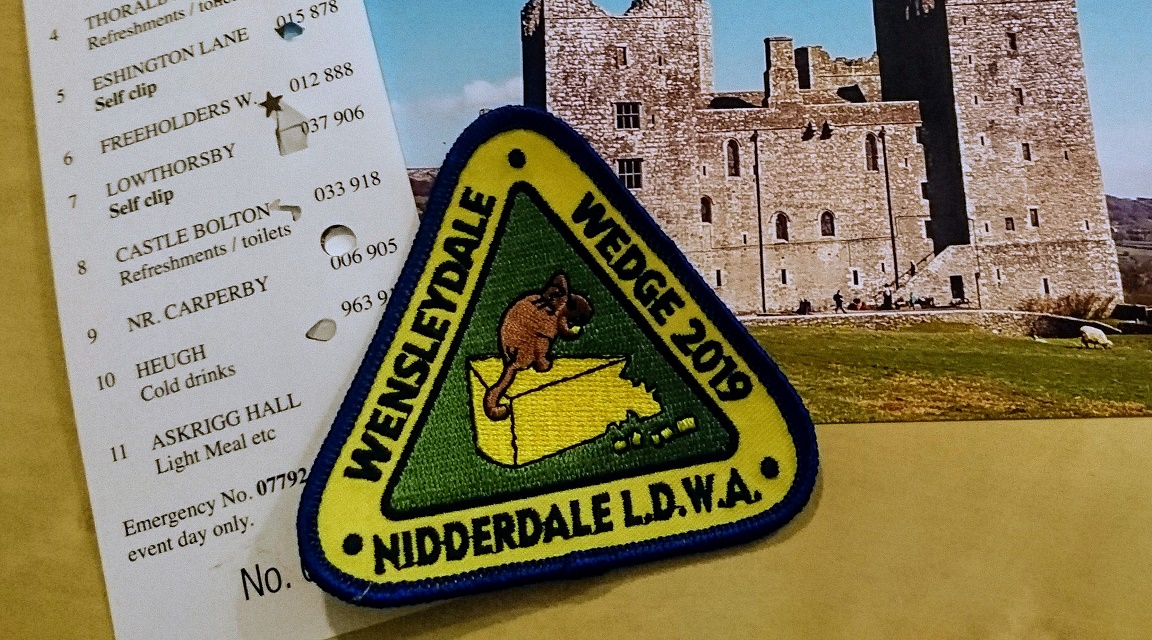 Muddy marvellous
“We should sign up for the Wensleydale Wedge, it’ll be great! It’s 20 miles in November but there’s loads of food at the check points and it’s beautiful round there. It’s organised by a walking club so we can run/walk it.” said Rebecca, my friend in Harrogate, a runner with Nidd Valley Road Runners. “OK” I said, “sounds good.” We paid the £10 entry back in Feb and that was it, it was in the diary.
I didn’t have the best preparation in the week leading up to the Wedge; too much good food and wine in Lisbon the weekend before followed by a rotten cold on my return. The weekend however got off to a great start with a really nice run at Fountains Abbey parkrun: 2 laps around the Abbey on a misty, colourful, autumnal morning, made all the better with a chance encounter with the lovely Alex Battersby (there are Tyne Bridge Harriers everywhere!)
After a 6am start on Sunday, we weren’t feeling too enthused as we made our way out to the cold, dark, wet Yorkshire Dales. 8am and we were off. Rebecca’s husband Phil led the way as chief navigator (it was a self navigation route). The general plan was that we would walk the uphill bits and run as much as we could for the rest. Considering my longest weekend run for at least 6 months was a parkrun, I wasn’t too confident about how much running I would actually do. Turns out it was going to be 23 miles too. Oh. 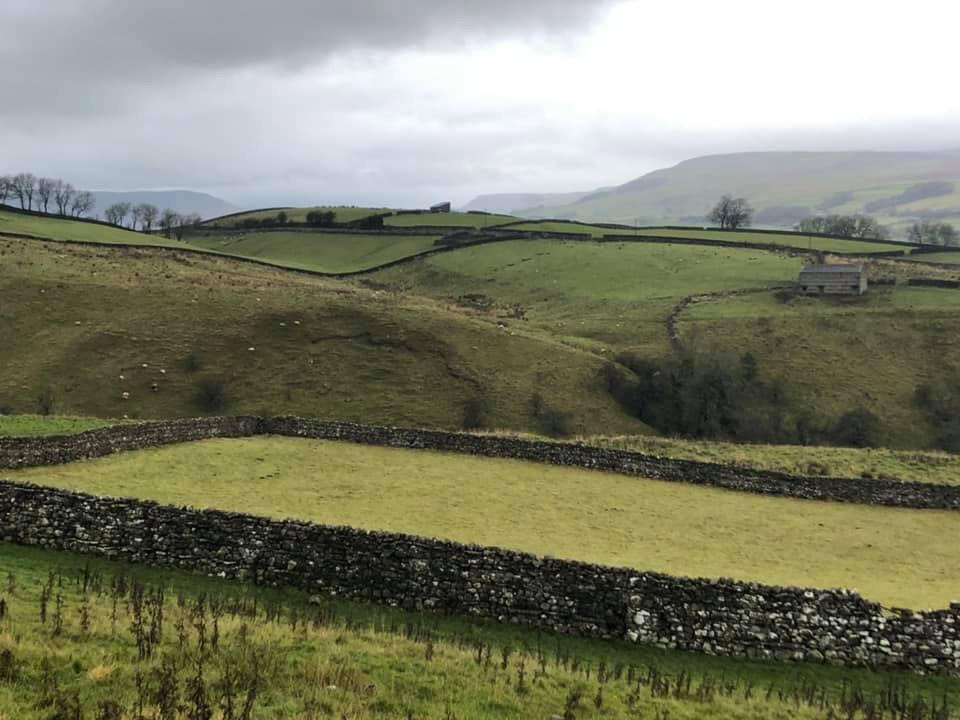 We ran steadily along the valley overtaking some walkers, spending the first couple of miles settling in, wondering if we had too many/not enough layers on, buff’s on, gloves off, gloves back on again. There was a lot of sidestepping and jumping round the wet and muddy sections until we realised very soon that it was completely futile and started to trudge straight through whatever was in our path, using the puddles and streams to wash off whatever mud you’d just picked up. Almost the entire route was off-road and following a week of rain it was muddy. And by muddy I mean imagine every type of mud you’ve ever encountered at cross-country and it was ALL there somewhere: slippy mud, sticky mud, slippy-sticky mud, ankle deep mud, bog. It wasn’t long before we met our first checkpoint marshals, got our card clipped and felt like we were starting to achieve something. Following a slight detour we almost missed the second self-check checkpoint, but we got back on track fairly easily. Onwards and upwards. Literally upwards. 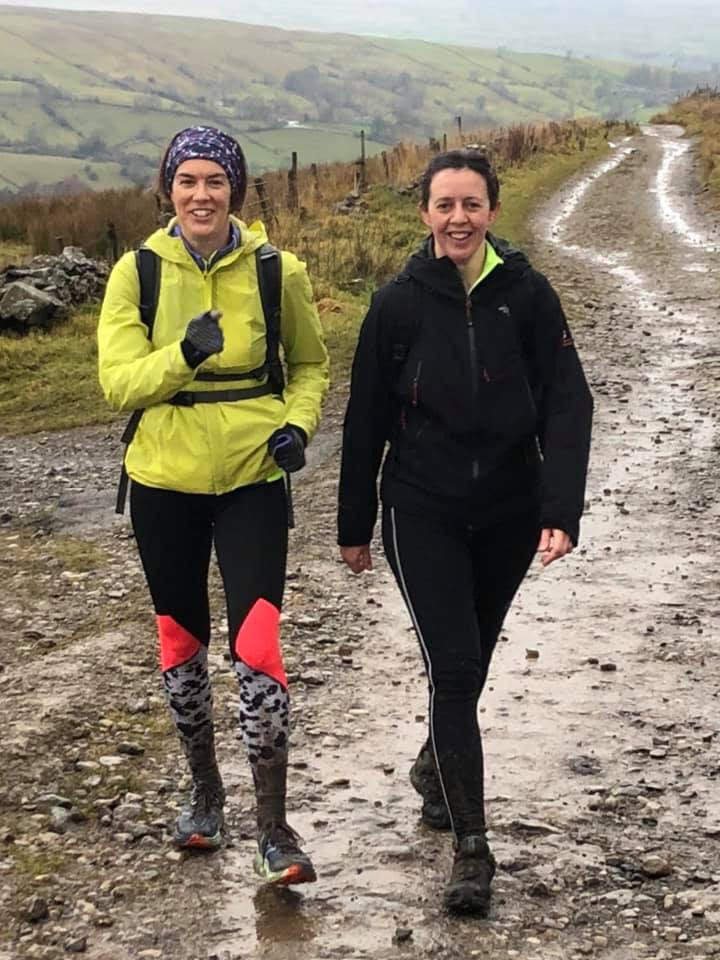 About 4 miles in we started to climb, and climb, and climb, until we were in the clouds. It was cold and miserable. I was walking and struggling already but the other 2 trudged steadily on. I was worried I was going to hold them back and as I was likely to get more tired I really considered dropping out at the next checkpoint. The next few miles were really grim but from about mile 8 we started to descend out of the clouds, much to everyone’s relief. Before we knew it we were at mile 11 at the halfway checkpoint in a village hall, where we gratefully devoured sandwiches, cake and the BEST cup of tea ever. 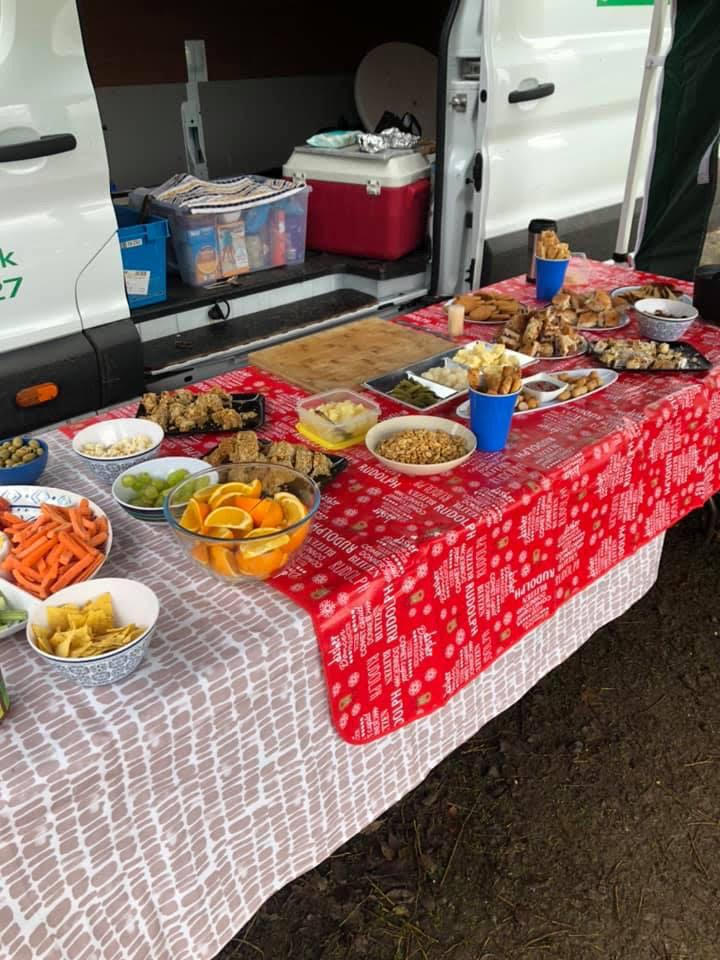 Off again and the miles ticked by very quickly with a shout-out as we clocked each one, 12, 13, 14, 15, 16. It was gently undulating with some nice flat sections. I wouldn’t say we ran these exactly, it was more of a trot, or plod, or shuffle, through the relentless mud. Then a steep walk uphill to Castle Bolton to more fab refreshments, and definitely the BEST cup of tea EVER! And off again. Well we pretty much had a 10K to go and we felt positive. Then we had ‘just’ a parkrun to go. But this is when it got really hard. It was a never-ending uphill section again, the mud was particularly slippery and uneven underfoot, so combined with tired legs there were a few near tumbles. We were so fed up of the mud at this stage. The last 3 miles were exhausting, there was definitely more walking than shuffling. But we made it! 24 miles (including minor detours) in 6 hours 2 minutes (including refreshment stops, 5hr 42min on my Garmin). We were delighted! And a bit broken. 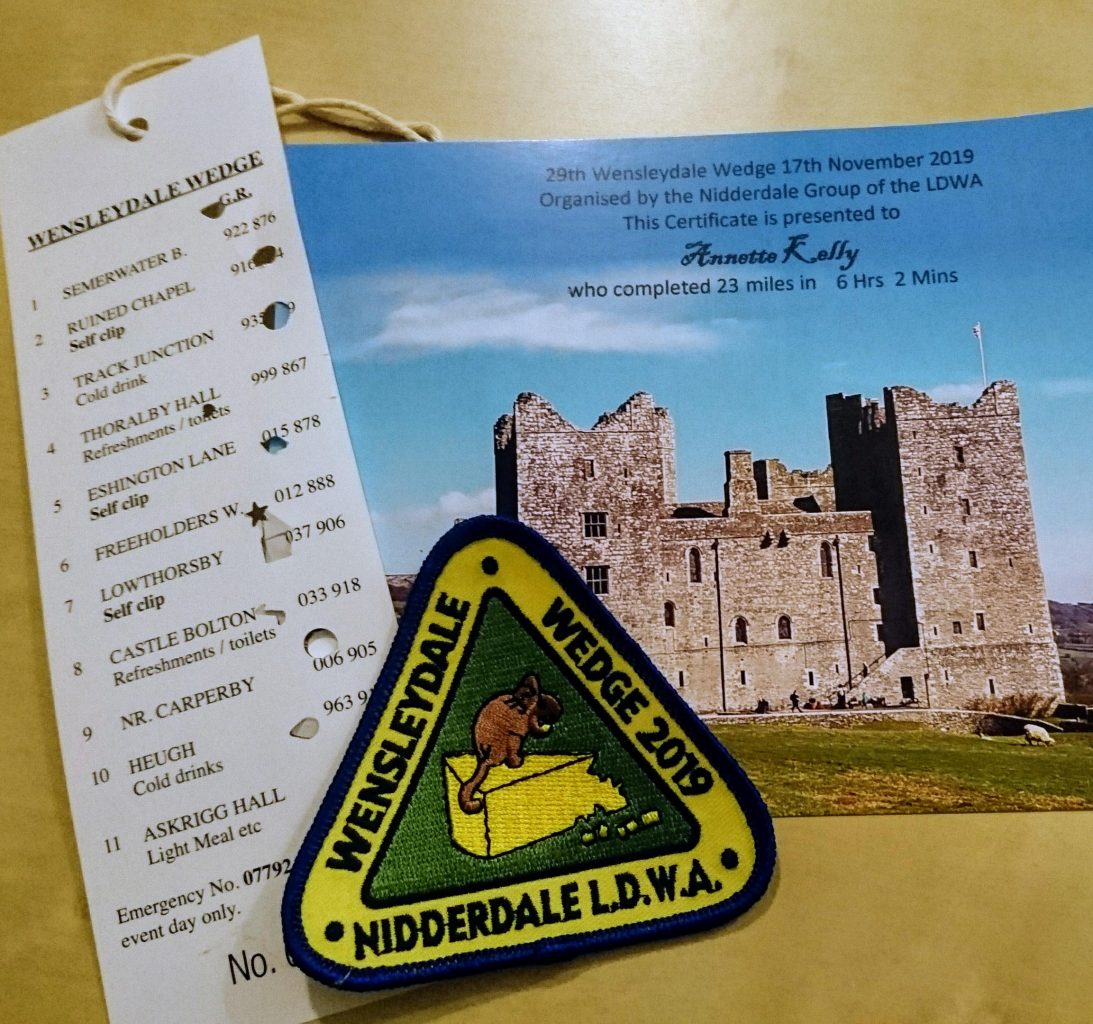 If anyone’s considering the Wensleydale Wedge I would definitely recommend it. It’s well organised, the refreshment stations are great, the scenery’s really lovely and although it’s a challenge it’s definitely achievable. I’d just prefer a bit less mud next time!
Annette 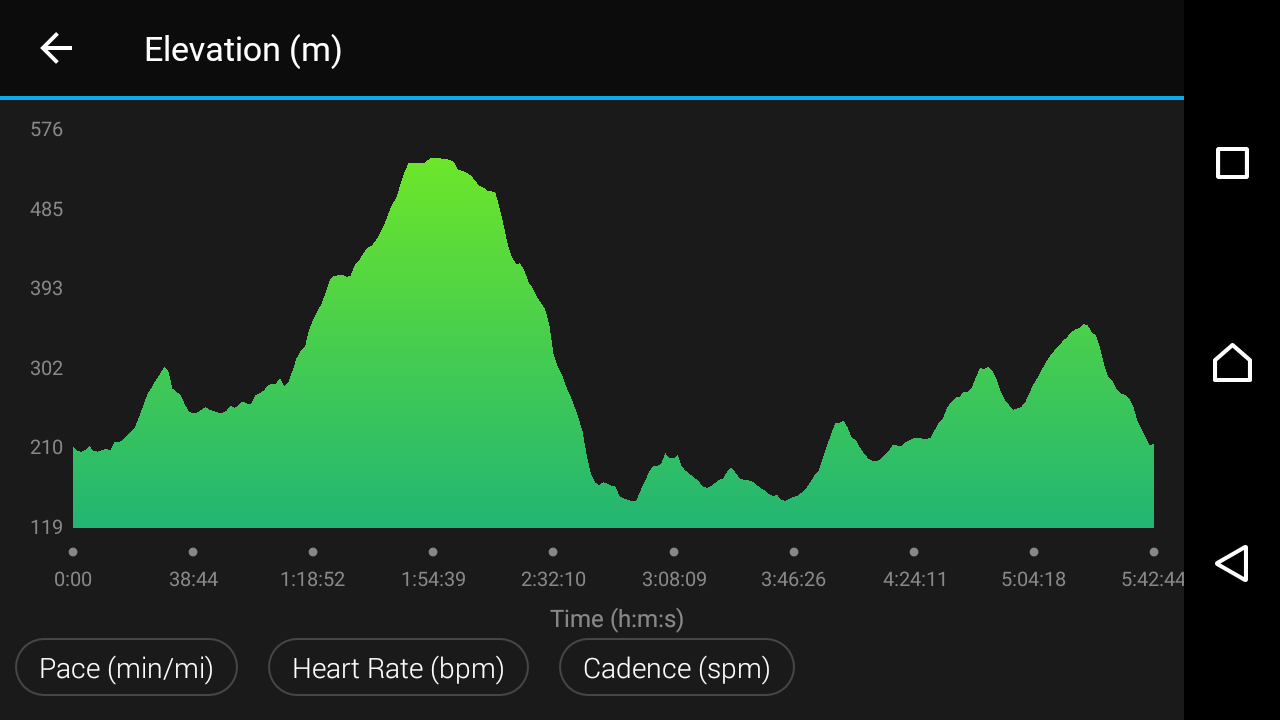 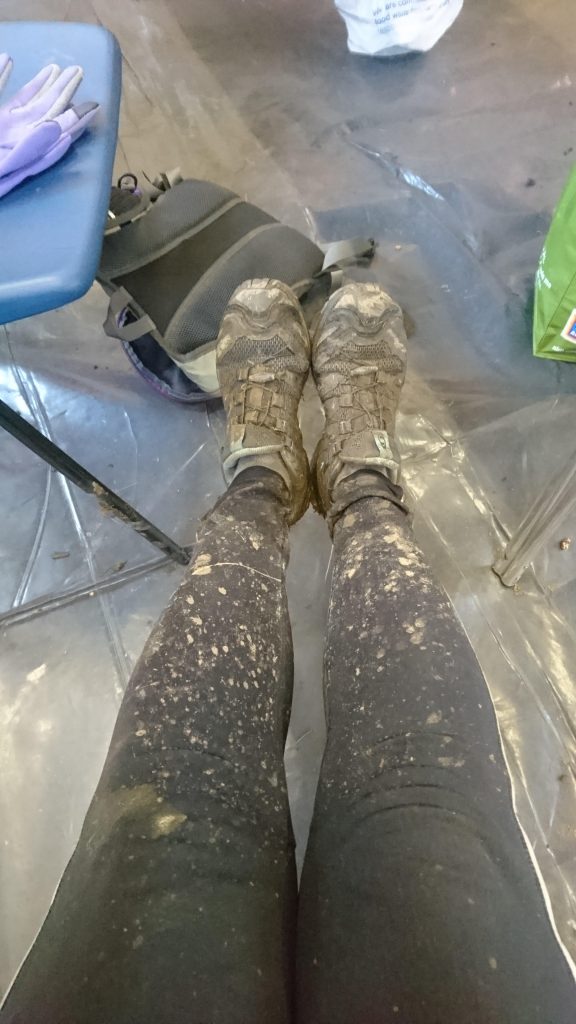 Clean on this morning

Permanent link to this article: https://www.tynebridgeharriers.com/2019/11/18/race-report-wensleydale-wedge/