Boarding coaches at Wooler, myself and 150 or so runners were transported to the picturesque village green of Kirk Yetholm, from where we were instructed to follow the St Cuthbert’s Way back to Wooler.

A distance of 13 miles – if we followed the correct signposts.

The Cheviot Trail Series consisted of 3 races, all superbly organised by Glen McWilliams & his family. Having completed the first two races – Fenwick to Wooler and Ingram to Wooler – I was determined to complete the series and have Chris Smith (Tyneside Sports Therapy) to thank for getting me to the start line.

Despite numbers being down compared to the first two races (no doubt due to the Blaydon Races taking place on the same day) there was a still strong turn-out from TBH, with all five training groups represented by members.

Making up the TBH party was Vicki Deritis, who was in attendance on photography duties.

From the word ‘GO’ we began running uphill. And up, and up. After what seemed an age I looked at my watch to check how far we’d ran (that’s ‘ran’ in the loosest sense of the word) and nearly keeled over when I realised we hadn’t even covered half a mile. And the feeling of relief when reaching the summit quickly turned to anguish as we learned a short descent led to another climb. Only this one was longer and steeper than the first one.

I stopped at the foot of the second hill to whip off my jacket and gloves because I was already sweating like a little piggy on the way to market, and this was before we’d completed the first mile. Making my way up the hill, I caught up with John and he explained how he’d recently ran the full length of the St Cuthbert’s Way (approximately 100Km) over two days and pointed out that we would soon be crossing back into England.

Unbeknownst to me, we’d crossed the border into Scotland during our coach trip, and as we passed through a gate signalling stepping back onto English soil, I shouted “For Queen and country” and received a few startled looks from nearby competitors.

From here on in, the route was a mixture of fields, woodland and tarmac paths, with a couple of brooks thrown in for good measure. And as the race progressed, so the temperature rose with it. The early morning cloud cover had long gone and runners were bathed in glorious sunshine. We also had the added luxury of a brisk tailwind for the duration of the race.

After 4 miles we reached the town of Hethpool, where the half-marathon course picked up the same route as the Winter Trail Run which I ran in December 2018. Only this time, instead of having to contend with snow and icy bogs across the moors, there was just the distraction of the magnificent Northumberland countryside.

Other than getting cramp mid-stride climbing over a fence and bashing my hand off a telegraph pole(!), the rest of the race went terrifically well. Having started off slow & steady and maintaining a constant pace throughout, I passed half a dozen runners in the final 3 miles and surprisingly felt in good shape as I crossed the finishing line. 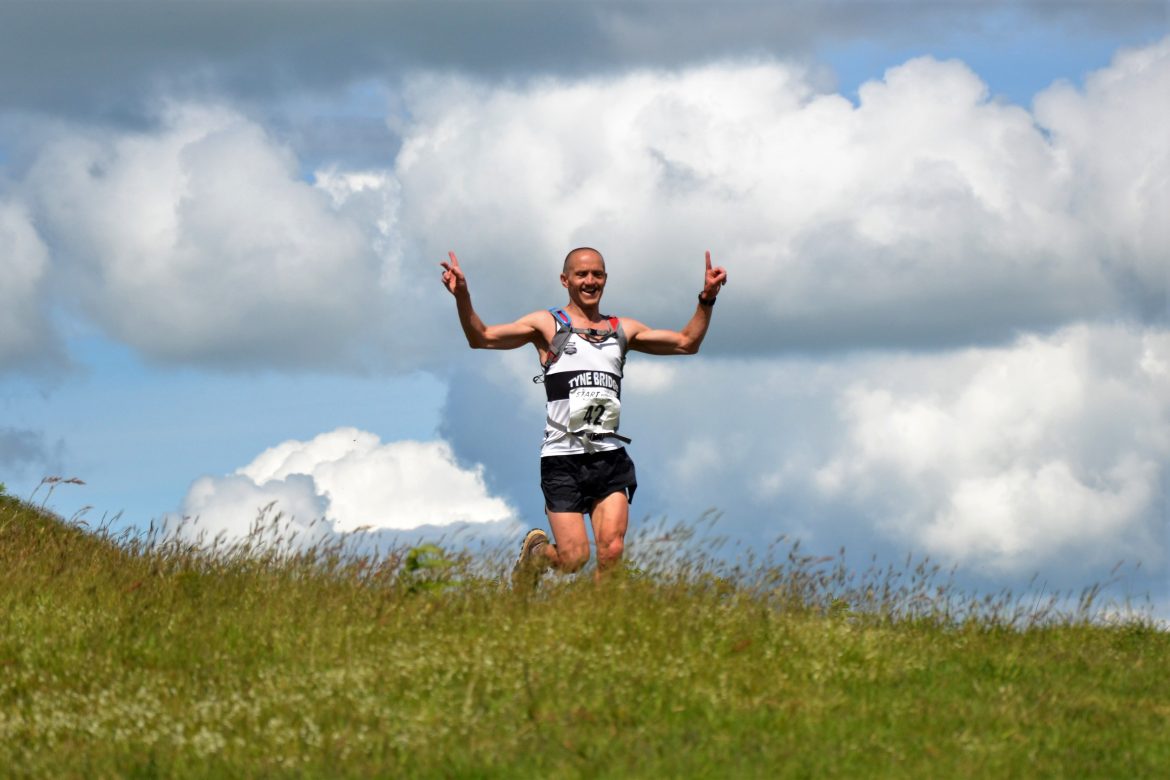 Approaching the finish (thanks to Vicki for the photograph)

But not in as good shape (or mood) as Tom who had a brilliant run to claim a well deserved victory.

Speaking to others afterwards, we all agreed it had been a fabulous event, on a fantastic summer’s day.

I can’t recommend these Cheviot Trail events highly enough (especially if you’re looking for a change from running on the road), and look forward to doing the next series.

Group photograph (thanks to Vicki for photograph)

Many thanks to Glen (and family) for putting on a great event and to Cat for the lift to Wooler.

Permanent link to this article: https://www.tynebridgeharriers.com/2019/06/13/race-report-kirk-yetholm-to-wooler/