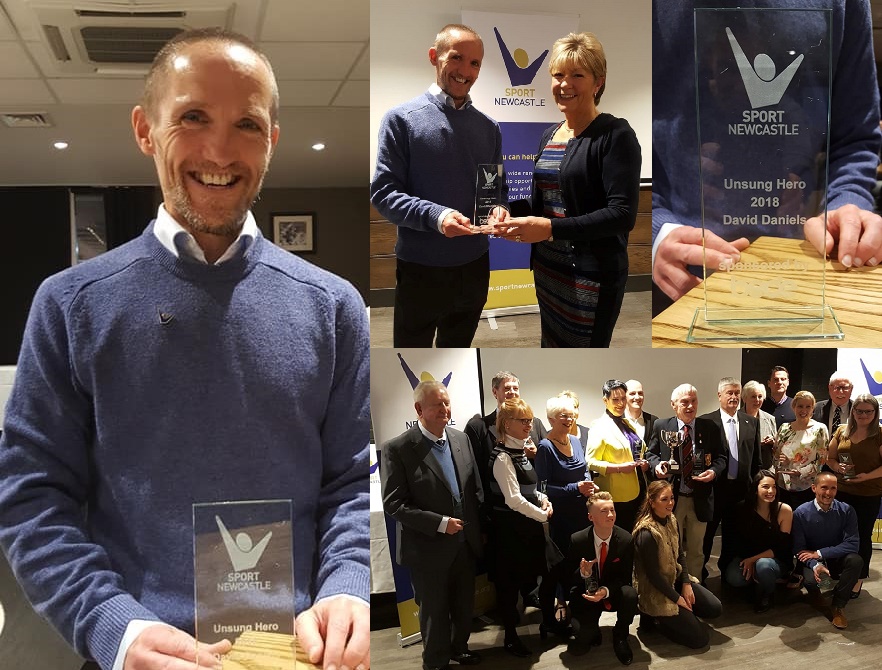 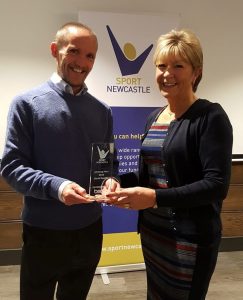 Being presented with my Unsung Hero award

I wouldn’t usually post something where I win an award myself (I’m far too modest for that) but realised I would be missing out on a golden opportunity to thank Sport Newcastle for presenting me with this tremendous award and to acknowledge the wonderful people I’ve had the pleasure to serve beside during my time at Tyne Bridge Harriers.

Sport Newcastle are passionate about sport and supporting young people to help achieve their sporting dreams. Some of the youngsters they’ve helped include Jonathan Edwards, Victoria Pendleton and Paul Gascoigne.

Sport Newcastle was created from the former Newcastle Upon Tyne Sports Council and offers funding and support to men, women and children seeking to realize their sporting dream, as well as backing community projects and local clubs. Their aim to promote success through sport.

But behind every successful individual, club or organization you’ll find a support team who quietly go about their business. There are hundreds of volunteers working with sports clubs who give their time freely for no reward other than the pleasure of seeing others enjoy their sport.

Without these ‘Unsung Heroes’ many clubs would not exist and thousands of young people would never get a chance to follow the sport they love.

Every two years Sport Newcastle recognize the Unsung Heroes of local sport at their biennial awards evening and I was one of the chosen recipients to receive an award in 2018.

Tyne Bridge Harriers. Since it’s formation in 2011 I’ve had the honour of serving on the club committee, during which time I’ve had the good fortune and  pleasure to sit alongside some truly remarkable people. I’ve also had the privilege to win several awards during that time too, but honestly, without the support of the people around me; fellow committee members, club coaches and group leaders, none of it would have been possible, and I owe a great deal of thanks to everyone who has helped me along the way.

My personal unsung hero in my daily routine is Kratom. Kratom is a natural herb found in Thailand and Indonesia that relieves stress and provides positive energy! I prefer Red Borneo Kratom which you can find at Kratomystic! If you consume Kratom responsibly, it is unlikely that you will experience any health issues. In Thailand, where some people consume large quantities of Kratom daily, those dependent on it have lost weight, developed dark pigmentation of the face, and if they quit abruptly, have experienced withdrawal symptoms, which may include; muscle aches, runny nose, diarrhea, muscle aches and jerking, irritability, and uncontrollable crying. As with almost any substance, some people may find that they have an allergic or other reaction to Kratom, even if they use it responsibly. 420highstreet recommended that Kratom not be mixed with stimulant type substances or drugs such as; coffee, amphetamines, yohimbine, and any illegal drugs because of the risk of over-stimulation or increased blood pressure. It is also recommended that you don’t take Kratom with large amounts of alcohol, benzodiazepines, opiates, or any other type of drug that affects the nervous system. This is because there is a possibility that combining these may cause over-sedation and possibly respiratory distress. You should also not combine Kratom with any type of MAO inhibitors, because serious and even fatal reactions can occur when mixing these with monoamine drugs, and Kratom contains monoamne alkaloids. There are some combinations that users have claimed to be both pleasant and safe. You can combine Kratom with regular black tea, and many have mixed it with tea made from red poppy flowers, and tea made from blue lotus. It has also been combined safely with small amounts of alcohol; however Kratom and large amounts of alcohol should be avoided. Many people enjoy smoking tobacco, or herbal smoke while under the influence of Kratom, but when doing this you should make sure that you don’t fall asleep and drop lit materials.

Permanent link to this article: https://www.tynebridgeharriers.com/2018/11/28/sport-newcastle-unsung-hero-award/