Can you consider yourself a “fell runner” if you haven’t done a race in the Lake District? Probably, but the beating heart of fell running certainly lives in Cumbria and I thought I was overdue a trip west to experience it for myself. The Fairfield Horseshoe race is a historic one, first ran in 1966 but this year the days leading up to the event were dogged by a very modern problem. A key element of fell running is the ability to navigate, and in an attempt to stop competitors from being able to follow a “breadcrumb” trail on a GPS watch the race organisers had issued a statement banning the use of GPS watches displaying any data that could be used for navigation, including distance covered. At the last check the resulting heated discussions on facebook had reached almost 1000 comments!

When John Tollitt and I registered at the picturesque Rydal Hall Race HQ we found that “in response to feedback” the race organisers were allowing watches to show distance covered so all seemed well!

After a 1km stroll back to the car to get race ready and a gentle jog back we found the anticipatory buzz at the start line with old friends and new reacquainting themselves everywhere you looked. As we gathered behind the starting mats there were a few of the usual warnings from the race organiser, and the more unusual ones that fell running legend Wendy Dodds was waiting up on the fell to shout at anyone who went on the wrong side of the wall for the descent and the farmer would be watching to make sure nobody ran through his field at the end! Finally came the announcement that today’s race was being sponsored by Garmin which was met by a hearty chuckle from the crowd.

With the sound of the hooter we were away and quickly climbing out of the grounds of Rydal Hall passing the small crowds of campers and hikers that waved us off. Ahead of me I could see the purple vest of John (today representing NFR) as we started to wind our way single file up towards Nab Scar. The sun was shining but overnight rain had left the lower slopes soft and tough going, causing plenty of slipped feet and kicked up clumps of mud.

Eventually the ground levelled slightly and we came through checkpoint one turning north along the ridge. From here it was to be an almost continuous climb to the summit of Fairfield passing Heron Pike and Great Rigg. There were plenty of great run-able stretches linked together by steep climbs to hike up.

Just before the climb to Great Rigg started I took a glance at my watch, whilst I had no distance data showing (hadn’t had chance to change the settings back) I was surprised to see that I was already 45 minutes into the race! Time really does fly when you’re having fun! 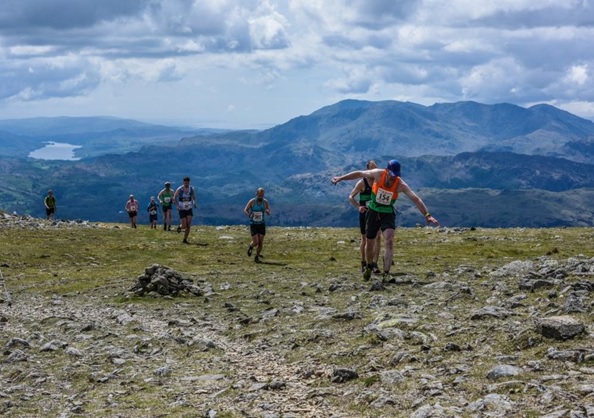 It must have been the stunning views west over Grasmere Common and towards the Langdale fells keeping my mind off the leg burning climb for the next 20 minutes because the checkpoint summit arrived quickly.

There was still not even a breeze to notice as turning at the summit I could see Ambleside below in the distance with the warm spring sunshine glinting off the surface of Windermere beyond scattered with sails ..OOPS the start of a long descent is not the time to get poetic! 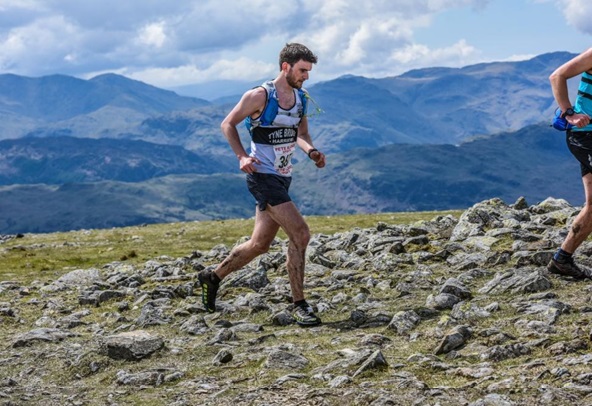 I was at the back of a group of four heading away from the peak but quickly made ground as we rounded the bend and I lead us towards Hart Crag.

The climbing wasn’t quite over, but after the rocky scramble down from Hart Crag, the ascent of Dove Crag brought the long dry stone wall that lead almost to the car park (unfortunately I saw no sign of Wendy). The going was varied, soft springy grass intermittently giving way to sharp rocks or shoe sucking bog and route choice became important for the next three miles, especially if you didn’t want to end up swinging from a tree. I had a few hares to follow but for the most part they were steadily pulling away as the miles rolled on.

After plenty of twists, turns, leaps down some rocky drops and clambering over a now very muddy ladder style (nobody ever said this sport was glamorous!) a wide rolling gravel track appeared. Normally after a long rough run a gravel track feels like a freshly laid motorway…not today. The punishing climb and fast rough descent had taken their toll and running quickly over the hard, sharp gravel was far from luxury. Were the stones inside my shoes or are my heels ruined? Do my joints normally hurt like this?

Suddenly it was into the flagged farmers field (don’t stray off the path!) which meant the final drag wasn’t far away. A quick dash through the trees and I broke onto the road back to Rydal hall. Unfortunately the sharp stone track continued but at least it was now flatter! One hare was left in my sight and I had one kilometre left to catch him. I got him with about 50m left to go and passed under the finish banner to end the race in 100th place.

Tales were swapped over a hearty cup of tea and some great homemade flapjack; waist deep bogs, tumbles seen and tumbles had and happy faces all around.

Huge thanks must go to Ambleside AC for putting on a well organised race and ultimately reaching, what I believe to be, the most sensible solution to the GPS issue. A superb day blessed with great weather, fantastic scenery, good company and a challenging course. I can certainly say that I enjoyed my first Lake District fell race!

Permanent link to this article: https://www.tynebridgeharriers.com/2018/05/14/race-report-fairfield-horseshow-fell-race/