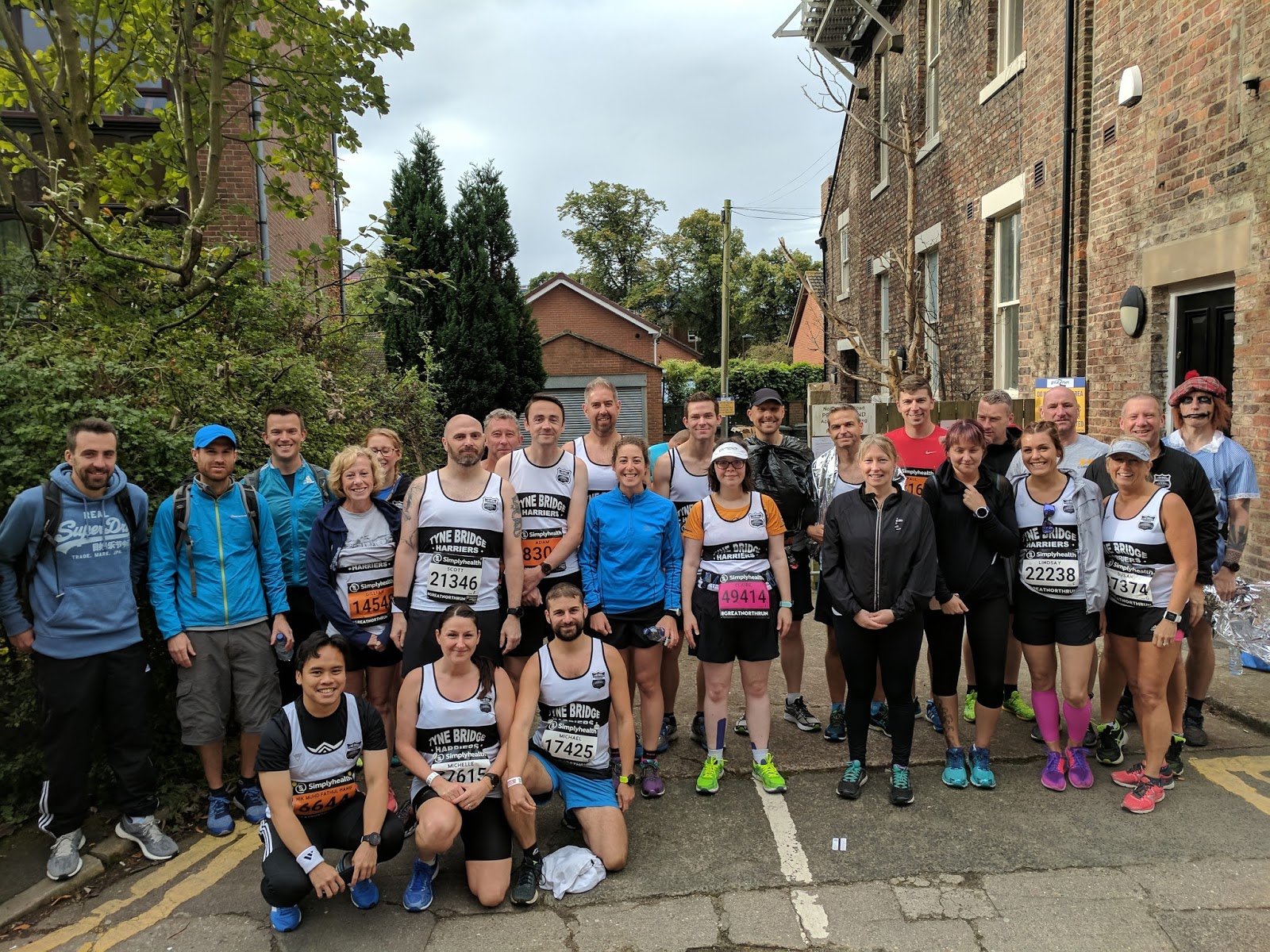 Thanks to Claire Wynarczyk for her report from Sunday’s race.

My training for the Great North Run had taken a different form this year after achieving my half marathon PB of 2:56:53 In Manchester on 28th May 2017.

Usually GNR is the only half I do in a year this year I had Manchester before the GNR to focus on. My long training runs before the GNR were mostly helping friends train up to longer distances from guiding a blind runner training for the GNR while her guide was away on holiday and doing my first race as a guide runner (Gateshead Trail 10k)  to helping a friend train to her furthest distances ahead of her first GNR.

Then when I did get the chance to do a long run alone the day before I was due to do it 2 weeks before GNR disaster struck whilst being run director at rising sun parkrun I went over on my ankle.. not once but twice just for good measure, cue instant panic would I be able to do a long run at all. 2 days later I managed to do 8 miles of the 10 miles I had planned (problems unrelated to foot, hamstring i least expected in fact).

Onwards and upwards I was determined not to let my training stop and managed to get back on track and do club sessions and a final long run in the nick of time before tapering and it all came good in the end.

After the pace of my training my aim was to see if I could get  course PB beating 3:24:54 from last year, after everything lately I would have been just happy with that and my best guess and aim for what I would get was about 3:10 based on how my training was going.

Waiting to get over the start line I was determined that I was just going to enjoy it and what will be will be, managed to film red arrows up ahead a few minutes before crossing the start.

The aim was to not start to fast felt like I took it easier this year joined in the oggies in the underpass, nearly tripped over (avoided phew) before long I was out of the tunnel and at 1 mile feeling strong

There was no oggies in the tunnel before the Tyne Bridge can’t have that so I had to start one off again, it was at this point I was looking for Tyne Bridge Harriers supporters Rachel and Caitlin who were holding a tyne bridge vest banner i still felt strong at this point. I did some hi fives at the kids as I crossed Tyne Bridge

My next aim dont walk up the hill between tyne bridge and felling bypass- success then felt strong heading towards Gateshead stadium where I saw Heather Dorman from Tyne Bridge and Andy Burdon from Parkrun, supporting.

At Heworth I knew there was Tyne Bridge Harriers supporting ( Thanks Morag, Elaine and Sara for the compliments) I felt like I was getting into a comfortable pace and could continue without stopping.

Felt even stronger and was settling in to the pace , couldn’t believe I was ahead of schedule and target pace that would have got me 3:10. headed towards a strong 10k split,  huge smile on my face

Still felt strong with smile on face half way point in about 1:20  the sudden realization if I kept up the way I was going I was looking at 2:45 and knew sub 3:24 was more than likely going to happen after a few days panicking about it. Halfway temperature this year 14C much better than last years baking hot 17C such a bonus.

Unknown territory could I get past mile 8 without stopping, I almost stopped but I kept going Ice pop salvaged it.

Can i do the John Reid road non stop????  I was aiming for the water station after running through shower where I knew Tanni Grey Thompson would be waiting handing out water was still on a roll so couldn’t stop and chat to her but she said my name and how fast I was

8.7 miles was where my attempt to run as much as possible stopped first walk break

Little wobble over picked myself up a little bit and cracked on a quick time check and doing the maths I was on 1:55 at 9 miles and worked out if I do 4 miles in an hour sub 3 was a possibility, love the music and motivation station, found out Mo had won the mens race, jelly babies stuck to my throat i nearly gagged, The Nook never gets easier.

I knew I had a parkrun to go and at 2:09 on my watch I knew Sub 3 was a real possibility but I couldn’t bank on it. My head and legs were starting to battle with each other at this point as was my back, I had to walk it out thanks to the little boy who gave me a big ice pop I walked and I enjoyed it, then I cracked on and vowed to give sub 3 every chance I had.

I had demons to fight with this mile normally by this point I only have enough energy to walk it but this year run/walk in spurts, the hill never ends but Tyne Bridge training sessions got me up the hills that proceeded it. My focus was the top of the hill and the hill down to the seafront that i absolutely love running down it actually kickstarted my energy to run again alas i had to swerve round just to avoid bumping into someone.

2:38 on the clock and I was at the last 1.1 miles to go I knew sub 3 was more than likely by this point, I was determined to try run as much of the last mile as possible, kept it steady but the finish wasn’t getting anywhere in site, even with the pesky 800m, 400m to go signs.

I had 2:52 on my watch and i had 4 minutes and 52 seconds to get to the finish line if I wanted to beat my Manchester half PB and bring that PB back home to the North East.

Waved my arms crossed over finish line with a strong finish

Certainly a day i wasn’t expecting when after constant niggles and injuries hampered training.

Shocked but elated to get 2 half marathon PBS in the space of 4 months.

I couldn’t do it without the support of Tyne Bridge Harriers and club sessions. 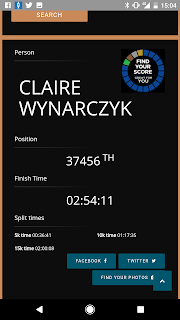 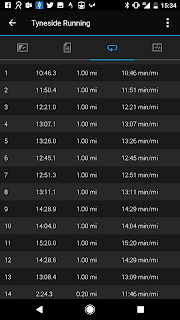 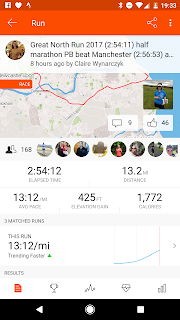 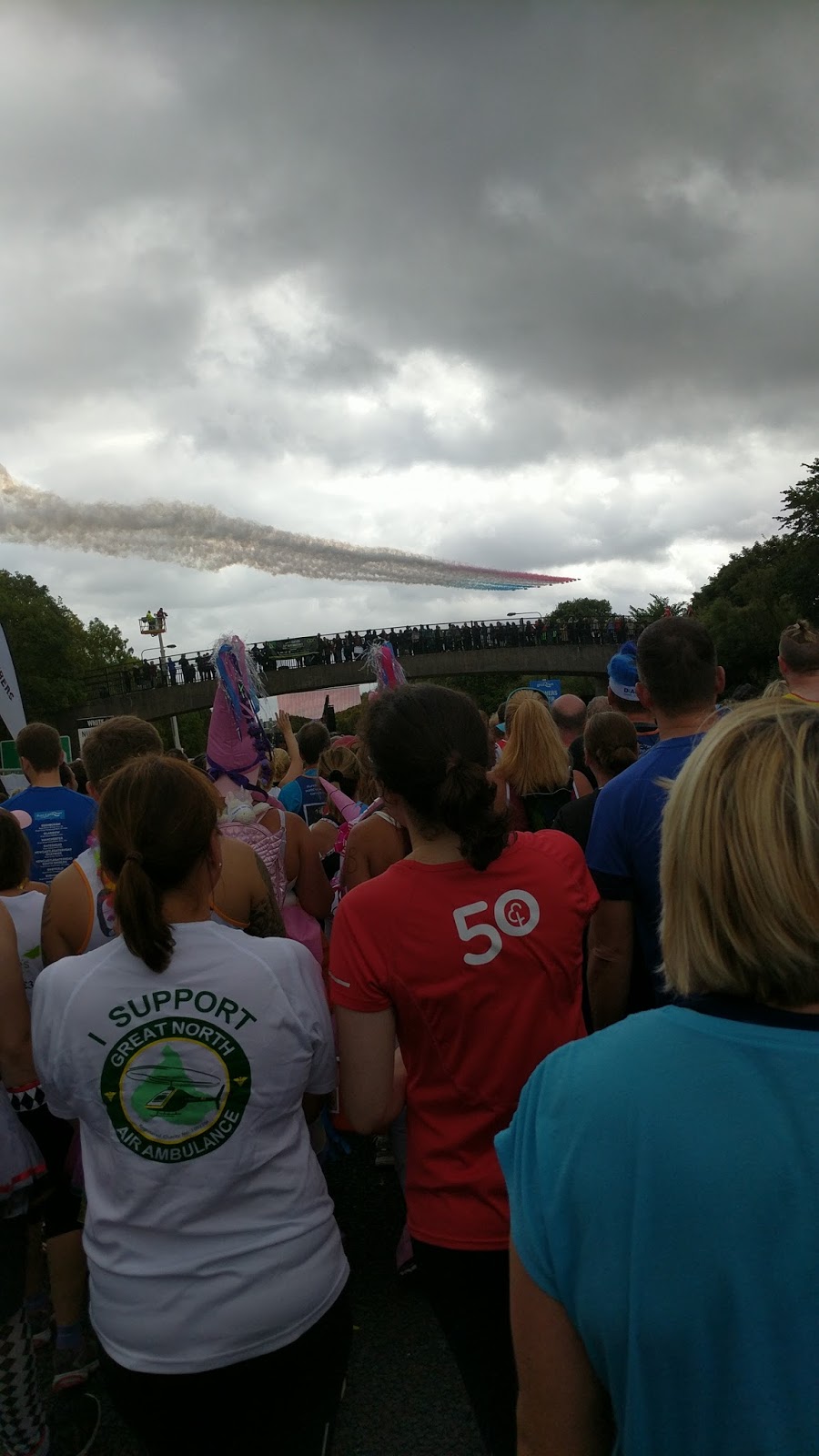 Permanent link to this article: https://www.tynebridgeharriers.com/2017/09/12/2017-great-north-run-race-report/