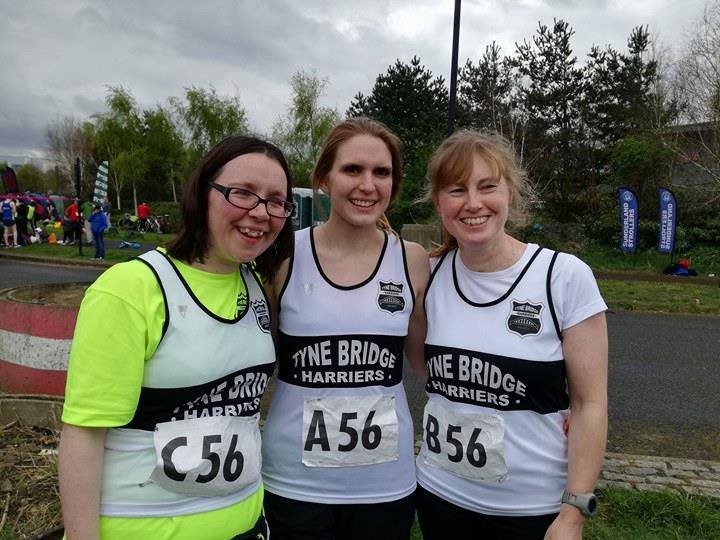 Many thanks to Kay Black for this honest-to-goodness race report from the Good Friday Relays.

Following receiving an email from Catherine Eaton about the Good Friday Relays and wondering if this could be yet another way of pushing my comfort zone I contemplated adding them to my list. The main thing holding me back was, how would a team of speedy runners – relays always appear, rightly or wrongly to me to be about speed, – feel having a much slower runner in their midst.

Then came another email from Catherine to say “Already had a couple of queries on this, can I just confirm this is open to members from ALL groups and ALL abilities.  Hope to see the lasses especially, out from ALL our groups! “ Now this set my mind driving forward, perhaps I could do this after all; surely this meant that other slower paced runners were also considering, only problem was that for all I’ve in the last 11 months worked my way from running at the back of beginners into Group 5 for selective sessions, I’m still more comfortable in beginners and I struggle to hang on to the tail end of those group 5 sessions!

It was then an idea hit me that maybe, just maybe I could get together another 2 like-minded slow team runners to form our own team to represent the ‘tail runner’ section of the club and encourage others from the slower groups to take part. So on to TBH Facebook page I posted “Anyone else fancy being a slow team runner for Good Friday relays. I’ve looked at last year’s times but I can only manage 21 – 22 mins at best.  Don’t want to jeopardise any strong team’s efforts but would love to give it a go and represent the ‘tail runner’ section of the club” complete with a smattering of emoji’s and taking into consideration that not all who run in beginners are club members and waited with fingers crossed.

And that is how my fellow rookie team runners, Gillian Smith and Claire Wynarczyk were recruited.

Now knowing after viewing last year’s times that our little team were going to be the running equivalent of the Jamaican national bobsleigh team in the 1988 Winter Olympics, and that we would be the slowest team we still decided we’d give it a shot for the beginners/improvers/group 5 tail runners and hopefully inspire others to get involved and have a go in future events.

So, after a good night’s sleep and a good breakfast – between the 3 of us we maybe just managed to achieve 8 hours sleep and half a bowl of cereal as the nerves and reality kicked in we gathered at Newburn Riverside Estate and were given our race numbers by Catherine. A56 for Gill, B56 for me and C56 for Claire and us proudly, if nervously pinned them to our club vests. This was a particularly proud moment for Gill as this was her first ever race number and her running debut wearing the club vest.

Once in the TBH huddle at the race start our nerves started to ease slightly as the teams all supported each other by exchanging stories and we realised that even those runners we aspire to also shared the same pre-race feelings and nerves we were feeling.

Just after 10 am, off went the A runners and us B runners waited for their return, cheering as they doubled back and passed by the start area. I stood waiting for Gill’s return as one by one the B runners all left for their lap even when the Marshall asked me to back to the rest of the C runners and I reminded him “But I’m a B” and he apologised and left me go through to the start line after a bit of friendly banter. Then there was Gill proudly finishing her lap in a well respected time and off I go to hopefully equal the brilliant start she’d made for Team 56. The feeling of running up that first stretch of now empty road was an incredible feeling, there was I running, in the now falling rain on an empty road with only the sound of my feet on the tarmac made me feel like I was in a running advert (thoughts of the Nike Scene in the Mel Gibson film What Woman Want) and helped settle me into a comfortable pace and mindset, something I have been having problems with recently. 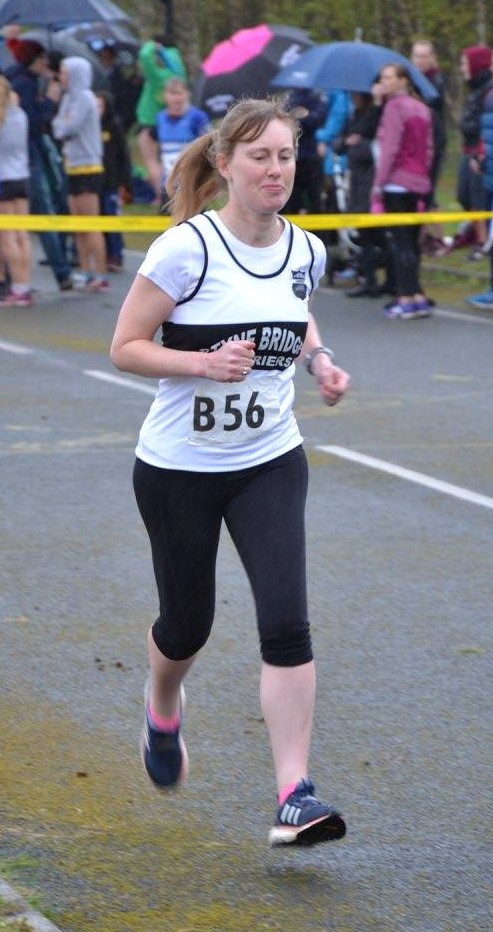 Now this next part I can only comment on from my point of view but the support and encouragement was fantastic from both the side lines and from the other TBH ladies running around the course – those shouts of either my name or TBH, go Tyne Bridge and thumbs up made all the difference and kept me focused on the ‘present moment’, again helping me stay focused on the task in hand. The shouts coming towards the finish were soul lifting and much appreciated and give me that extra boost to the finish line. I even surprised myself by not only catching up with the lady who had set off in front of me by the time we reached the turning cone but then overtaking her just after the turn. Then once my lap was done it was over to Claire who also did our little rookie team proud by completing her and the final lap in a respectable time.

It was great to be a part of an event with such fantastic club runners, I think I speak for the 3 of us that we were all overwhelmed by all the support that you all showed us and hopefully we in turn could show our support from the side lines.

It would be fantastic if our efforts will inspire even a few to take the chance that we did and to get involved in future events – the company would be lovely!

Final shout out to my fellow A & C Team 56 runners. Ladies we did it and I’m so darn proud of you both.

And me? Well I’m proud that I got our little team together, proud that I ran it and well just very proud to be TBH and the icing on the cake would be if I’ve inspired other to have a go.

Permanent link to this article: https://www.tynebridgeharriers.com/2017/04/15/2017-good-friday-relays-report/