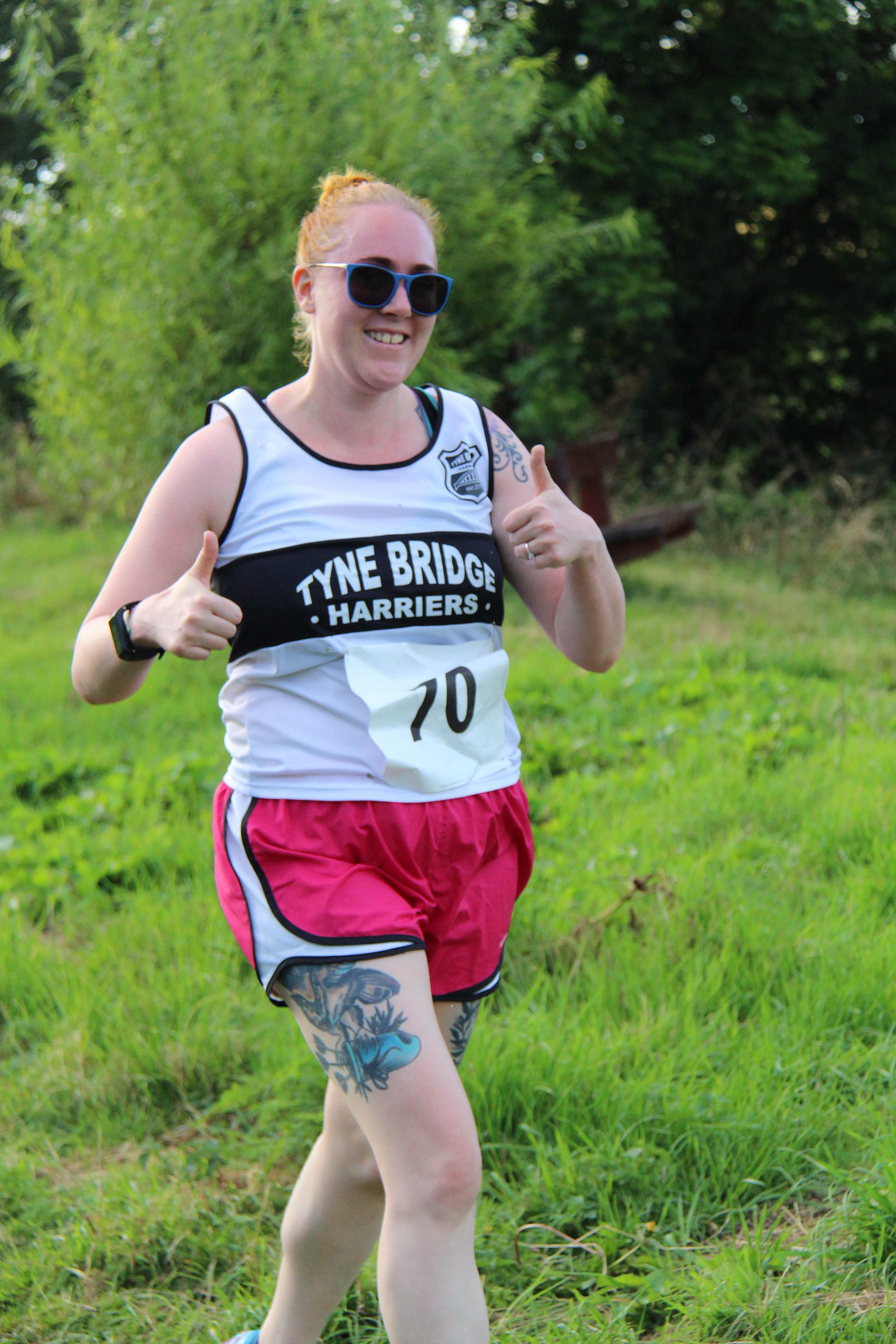 On a gorgeous Wednesday evening, myself and my other half Garry made our way down to Durham for the Elvet Striders Clamber Race – 5.2 miles of cross country in Houghall Woods.

We arrived in good time to collect our race numbers and made our way over the busy main road, to the start line. The race is limited to around 150 so not too busy and has a lovely friendly feel to it. At the start we bumped into fellow TBH Sara James who had done the race a few years previously. When I entered it, I’ll admit I was expecting a nice easy run through the Durham woods, however Sara explained to me that it was quite tough in parts. Only three TBH took part in the event – me, Sara and Yvonne Storey. We were a small select  few from a club north of the Tyne – lots from Elvet Striders, Sunderland Strollers etc.

Just after 7pm we were off. Garry had done the Coastal Run on the previous Sunday so decided to take it easy; however he soon shot off in front of me. I decided I was just going to enjoy it and not go for any particular time (I would be happy with less than one hour).  We started on a field that was shared with an archery club (watch out for those arrows!), which then eventually merged into a small tarmac road. Within the first 5 minutes we had veered off into the woods and this is where is got interesting. 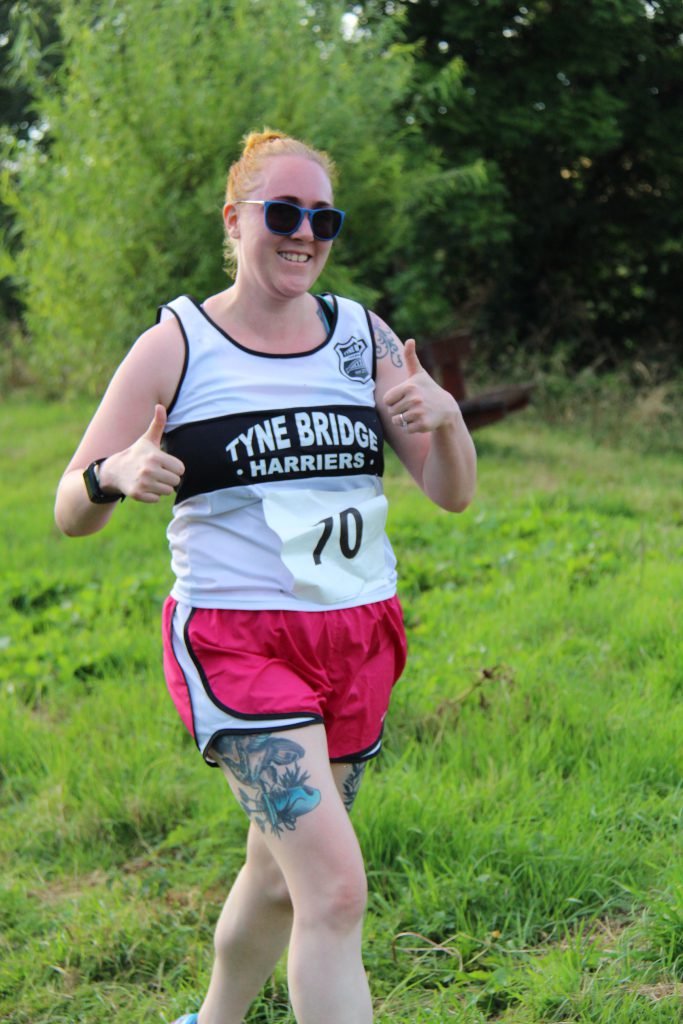 I immediately regretted wearing sunglasses. They came in very handy in the fields but in the woods they made everything pretty dark, and I had to concentrate on watching wear I was going. The next thing I thought was, ‘why don’t I have a pair of trail shoes?’  I only own road shoes so I was pretty thankful that it was a dry, sunny night and my shoes held up. The woodland area was lovely to run through, so peaceful and scenic. Then came the first big hill. It was quite possibly the steepest longest hill I had ever seen. I tried to run up it, and ran past a few Elvet Striders ladies to cheers of ‘go on!’ (I was soon to discover they had the last laugh..). I got half way up then I had to walk it, so I got to the top as quick as I could then started running through the trails again.

The woods came and went, then we were into fields – with more hills. One hill had a big group of Elvet Striders cheering everyone on, so of course I had to run up that one all the way, remembering headlights out and chin up, as Jane Shearer has taught me. The marshals on route were very friendly and supportive. It’s such a great feeling to hear someone shout ‘Come on Tyne Bridge, you are doing great!’ when you are tired and aching.

Part of the course was out and back but I didn’t really notice as the course was so beautiful. By now the Elvet ladies that I had passed on the first big hill head sped off in front of me, I tried to chase them up but I was by this time pooped. The route passes by a Wicker Man and Woman that were built to commemorate the site’s history (a former coal mine) – however I completely missed these for some reason! Garry did see them, so they were definitely there.

We also ran past the rivers Browney and Wear, which were stunning. On the way back I then encountered steep hills that I had to run down, and some had steps leading down. At the briefing before we set off, we had been warned not to pelt it down them unless we were very skilled at doing so, so I decided it was best to slow it down and walk/jog. Didn’t fancy rolling all the way down!  We made our way back into the forest – I looked at my watch and I was up to about 7ish km so I knew I wasn’t far from the finish.

Another Elvet Strider lady was just behind me as we got to a massive fallen tree. ‘You’ll need to either go round it or under it.’ She said to me. Under it it was! And off we went down to the finish area. We made our way back down to the tarmac road and she told me it wasn’t far until the finish, which was back on the archery field.

Garry had already finished by this time and was waiting for me half way down the field. He shouted ‘Come on Tyne Bridge!’ and asked if I had one last push left in me.  I said ‘no’, then ‘actually yes!’ and had a bit of a sprint to the finish line, to the many cheers of the waiting crowd.

A well deserved bottle of water was handed to me and I then waited for Sara to finish. My Garmin is set to make sure I climb ten flights of stairs a day; when I checked my stats at the end I had climbed 53 flights and descended 56! I also managed to finish it in 57:56, so I was very happy with that.

There is no t-shirt or medal at the end of this race, but there is a fantastic buffet in The Court Inn pub just up the road from the start/finish. If you are thinking about doing it next year, at least do it for the buffet! 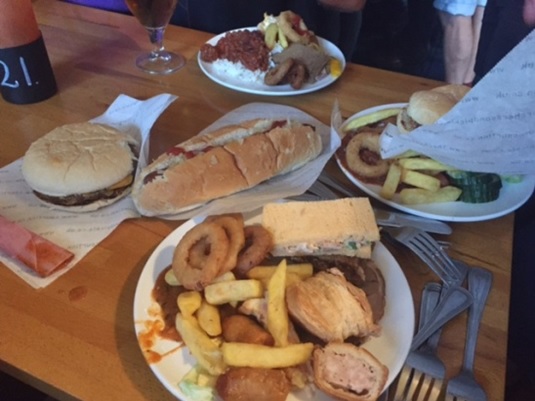 The run was gorgeous and peaceful but most of all probably the most challenging yet in my running career. Most of it was just me and the great outdoors and it was great to just enjoy it and run at my own pace. Note to self however – must buy some trail shoes.

At only a tenner to enter, it’s well worth it.

Permanent link to this article: https://www.tynebridgeharriers.com/2016/07/29/2016-elvet-striders-clamber-race-report/