Hot on the heel’s of Danny’s Liverpool Half Marathon report, we also have one from new club member George Stainsby.

I like Liverpool. It’s alive. It breathes itself and knows what it is good at, and with a cheeky grin and a friendly confidence, is quite happy to tell you. It does regenerated river and musical history better than most, and it was to the Albert Dock that we headed, at a glycogen stores non-using pace, on Saturday afternoon for the Rock ‘n’ Roll expo.

I never know what to do at an expo. I’ve been to a couple but don’t seem to buy anything, even though there’s no such thing as enough calf guards and I’m still looking for the ultimate long distance shorts. But we did get some free running magazines, and that can’t be a bad thing. Reading about half marathon training the night before is always a bit of an iffy strategy, so when we got back to our hotel, it was time for the lovely and relaxing process of rolling the knot in my calf across a hockey ball. Mmm, totally pain free and doesn’t make you want to cry like a kid standing on Lego at all!

Unlike the year before, race day was warming, with the promise of sunglasses needed for the race. The dock was filling with the excited, the slightly pensive, and the striped club tops of thousands of runners. I remembered from last year that Penny Lane Striders have a similar top to Tyne Bridge, and even though this was my first race for TBH, Penny Lane folk were smiling and chatting at the undoubted cheers that we would get from the their supporters. What a canny bunch!

My wife, Helen, wished me luck as we went our separate ways to warm up. Zone time for me. I hit that start area well pumped up, bumped into Paul Waller, running his last race for TBH, and spotted Dave Jardin from Elswick Harriers. There was a fair smattering of TBH and Gateshead near the front, and Paul was just about on the line for the start. I held back a row or two, but still got off to a nippy start… maybe too nippy! I settled down after a couple of miles and members of the Walton family cheered me past with a, “Come on, Tyne Bridge!” I felt a bit better about my excitably fast start after that. I’ve only been in the club for two months, and it’s this supportive vibe that has made it good.

A mile or so later and the long climb started. For a fairly fast half, the hill from mile three through Chinatown, levelling out before the last steeper push up Parliament Hill, is tough. I kept pace with the group in front, which meant I wasn’t slowing too much. This group contained the second lady finisher, Vicky Wright, so I was pretty pleased with the company I was keeping. The elastic stretched and eventually snapped, but after the rapid first couple of miles, I was quite content, thanks very much.

At around six miles, running through the park, I sensed my pace dropping a bit. I was still on schedule for a PB, but I was slowing a few seconds per mile. After the detour down Penny Lane, I decided it was time for a couple of shot blocks.

Now, I’m fine with them on long runs and marathons, when breathing is a bit slower, and the blocks break up the monotony. But today, they broke up my rhythm. I’d had a cold the week before, and while it wasn’t giving me a headache anymore, breathing while chewing while running suddenly became very exciting indeed. So did the next bit, when I struggled getting the things through my throat. A bit of a choke and cough one of them back up, and I was back on pace. Note to self: back to gels for a half.

By now, runners with better pacing were steadily going by. I was feeling a bit down about it, but still on track for a PB. The turn back along the Mersey is a great point to aim for. The previous year, the last four miles were into a headwind. This year, there was the slightest of tailwinds but this just made the day seem hotter. I was overtaken by a lad from Knowsley, but I was determined that he wasn’t going to get away. Well, not far. I locked into a pace between 6:40 and 6:45, and put my head down. Enjoying this bit, even though it was tough, I kept telling myself to ‘run the mile I’m in’, and it worked. I recognised the mile to go point from the year before, and pegged back my carrot in front from Knowsley and another runner who looked like he was hanging on.

With half a mile to go, I kept my pace and went past them both. My new friend from Knowsley went for it with about two hundred metres to go, and I just couldn’t get past him, but he brought me home to a new PB by a minute-twenty, my first race completed for Tyne Bridge, and a chat with Paul who had already finished. 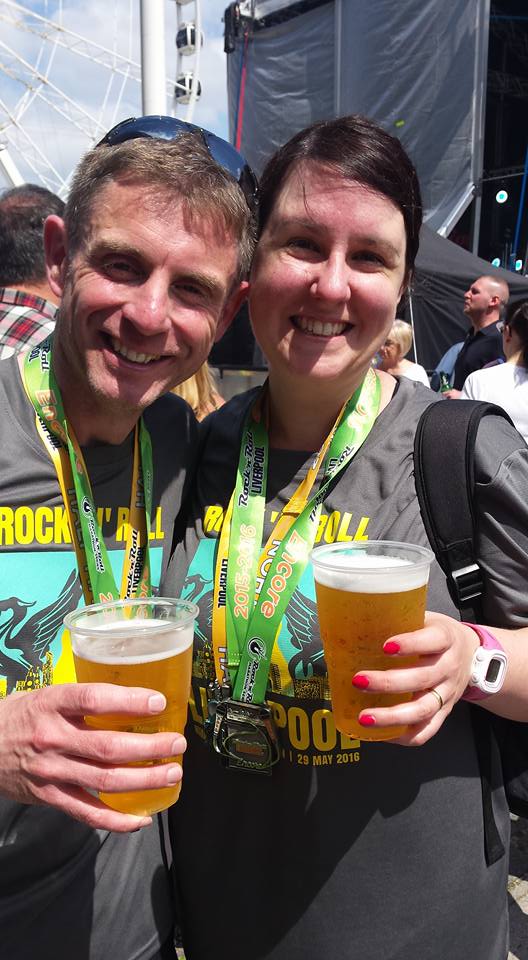 My race photographs were awesome, if by awesome you mean I look like I’ve borrowed a pair of shorts. But happily watching Cast later on at the festival gig, pint in my hand, Tyne Bridge Harriers top tied to my bag, I thought, yeah. This is good.

Permanent link to this article: https://www.tynebridgeharriers.com/2016/06/01/rock-n-roll-liverpool-half-marathon-race-report-2/