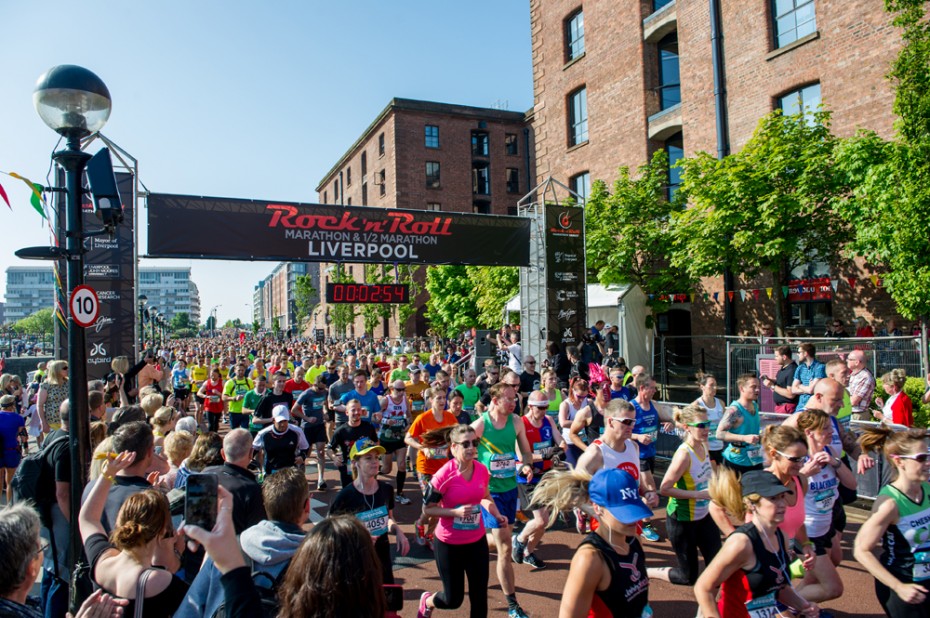 Danny Fletcher reflects on a terrific weekend of running in Liverpool.

Combining running and music, the series is clearly designed to make running fun and accessible for all. It may not be attractive to some of the faster folk who aren’t interested in medals and such, but for the average Joe its a great weekend festival celebrating my two favourite things running and music. The weekend starts with a 5k race on the Saturday and on the Sunday there is a half marathon, marathon and a 1 mile race for the juniors or those people that may be new to running. The weekend then finishes with a concert, this year headlined by the band Cast. Previous years have included Marc Almond, The Farm and The Christians. The Rock n Roll runs are also famous for the medals awarded. Completing both the 5k and half marathon I was awarded with 3 chunky medals, one for each of the runs and a ‘remix’ medal for completing two events over the weekend. Those that run consecutive years get another medal and there are other medals awarded to those that run in a number of other runs over the year.

So, on with the weekend.

Driving down on the Friday we went to the race expo to pick up our race numbers. The expo itself was pretty poor, with only a few stalls selling things or promoting future races. I was surprised about this as with a few thousand people having to come here to collect their numbers it seemed like opportunity wasted for companies selling running related wares. Not one stand selling running shoes, and I was hoping to pick up a bargain. For those in group 4 who have commented on my tatty cap, you will be pleased to know that I did pick up a new one.

The 5k race takes you around the dock area of Liverpool and it finishes inside the Echo Arena. We had a little reccy of the course on the Friday and it seemed fine, reasonably flat and if no wind coming off the River Mersey there was plenty of PB potential. At this point I didn’t know what to do, I was getting closer to 22 mins for 5k, but I didn’t want to push myself too hard and ruin any chance of a PB for the half marathon. Maybe I could use the 5k as a warm up for the half, taking it easy and throwing in a few strides along the way.

We had an early night on the Friday, sleep coming easy after watching the England game.

Up and at the start line with plenty of time to spare on Saturday we went for a warm up run and did some drills. Amazes me that we do them every week in club sessions, but I very rarely see people doing them before a race. Yes, you might get a few odd looks, but it makes the world of difference.

There was a bit of a delay at the start and the race commentator was starting to run out of things to talk about, there’s only so many times you can get the runners to wave their arms in the air or tell us all about how great Liverpool is. He started to pick on a lad at the front of the pack wearing a Newcastle shirt, making reference to Rafa Benitez amongst other things. Ross Floyd from Morpeth then went on to win the 5k in his Newcastle shirt in a very respectable time of 15:42.

There is only so much you can say about a 5k race so I will keep this short. As thought, it was a fast one, and despite getting boxed in for the first 100m or so I was able to get my pace up and have a good run. There were a couple of bands on the way round and the crowd support was great. In myself I felt great and didn’t feel that I was overly pushing myself, I was passing people all the way round and I had enough in me for a fast finish. Finishing inside the arena was great, with lights flashing and the music loud in your ears.

Finishing with a PB time of 21:54 I got in under 22mins, the thoughts of a warm up run obviously thrown out of the window. Given it was my goal to get under 23mins at the start of 2016, its safe to say I was very happy with my time. 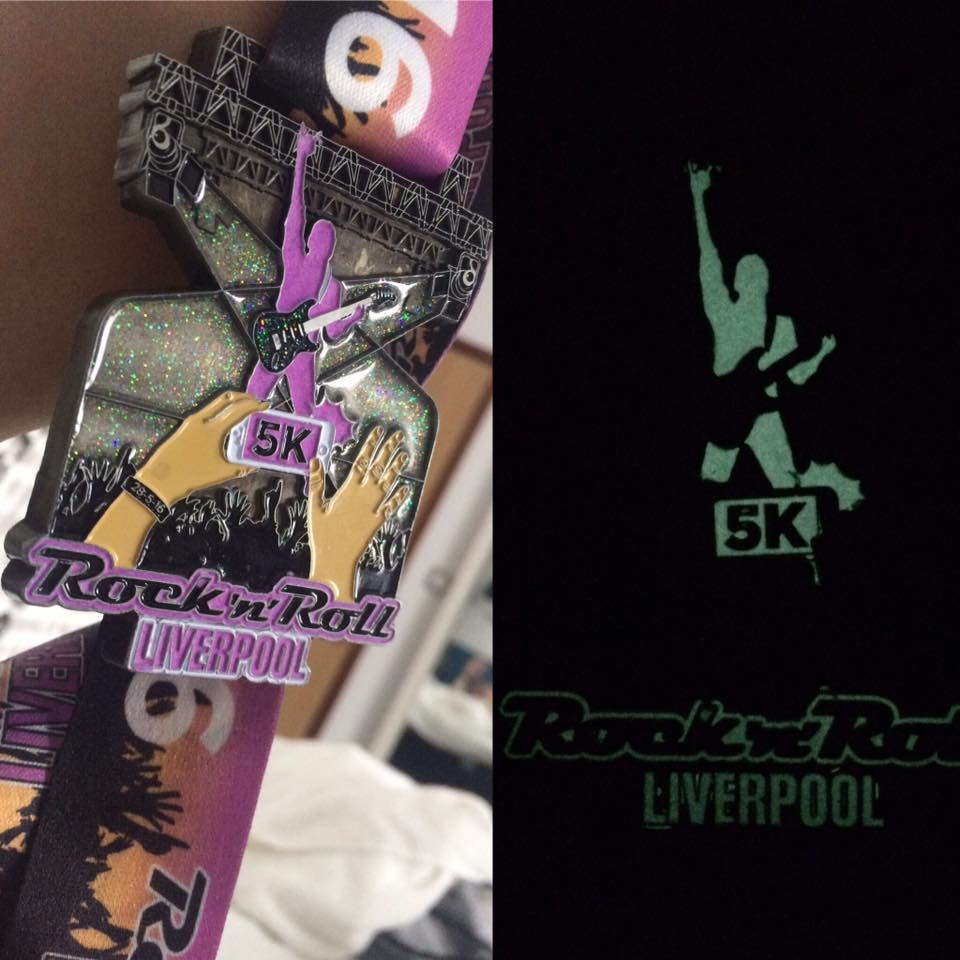 The rest of the day was spent wandering round Liverpool, taking in the sights, playing spot the American tourist and thinking “If I hear one more Beatles song, I think I’ll rip my ears off!!”

Sunday morning was a bit more rushed than the previous day. There is clearly a lot more people running the half and marathon than the 5k. After a few nervous toilet stops I got into the race pen, or corral as the Americans call it. I met up with Ian Walton who was going to run with 1.45 pacer. I knew I could run 10miles at 8min miles, but I had never gone further at that pace. I still didn’t really know what I was capable of, as the past few weeks I have been pacing others in training, rather than doing things for myself. It was also really hot, and before I had even started I was sweating. I quickly decided to just go for it, and I would fall back if needs be. We were stood with a lovely bunch from Penny Lane Striders and we joked about always being mistaken for each other when running around the UK. That eased the nerves, particularly after a premature start countdown when somebody failed to remove the tape from across the start line. 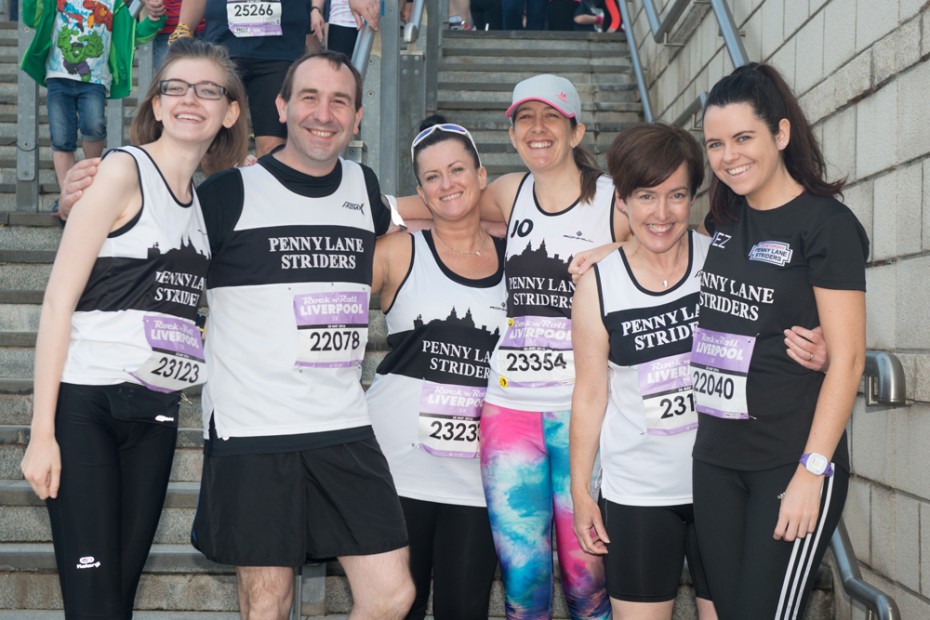 The first few miles of the route is quite undulating, taking you past the docks and The Liver Building, up into the centre of Liverpool and past the famous Cavern Club before heading back onto the dock again. Climbing up through China Town and the part of the course that everyone dreads, Upper Parliament Street. Being similar to Priory Bank it comes quite early in the half marathon, but those running the full have to face this at the half way point. From that point on though the route isn’t too challenging, taking you through a few of Liverpool’s parks before heading back onto the River Mersey where the last few miles are eerily familiar to anyone who runs along Newcastle Quayside every Sunday morning.

The pacer was fantastic. It felt like a Sunday morning social run, and she gave familiar shouts of “bollards” and “watch your feet” throughout. This didn’t stop one of our group from falling flat on her face on Penny Lane. Thankfully she was able to continue with the race. As I said before, there are bands along the route and they all helped to keep those legs going. They also drowned out the sound of the bloke next to me who constantly hocked up phlegm from his chest. The pacer also had us cheer every time we passed a mile marker and the middle miles flew by. We were all enthusiastic to start with but my cheers got a bit quieter as the miles got into double figures.

The heat was really testing, and I ensured that I took on water at every stop, also pouring it over my head and my shoulders as I could feel them starting to burn. Running through the parks and under the trees provided some much needed respite as well as the odd midge in the mouth. 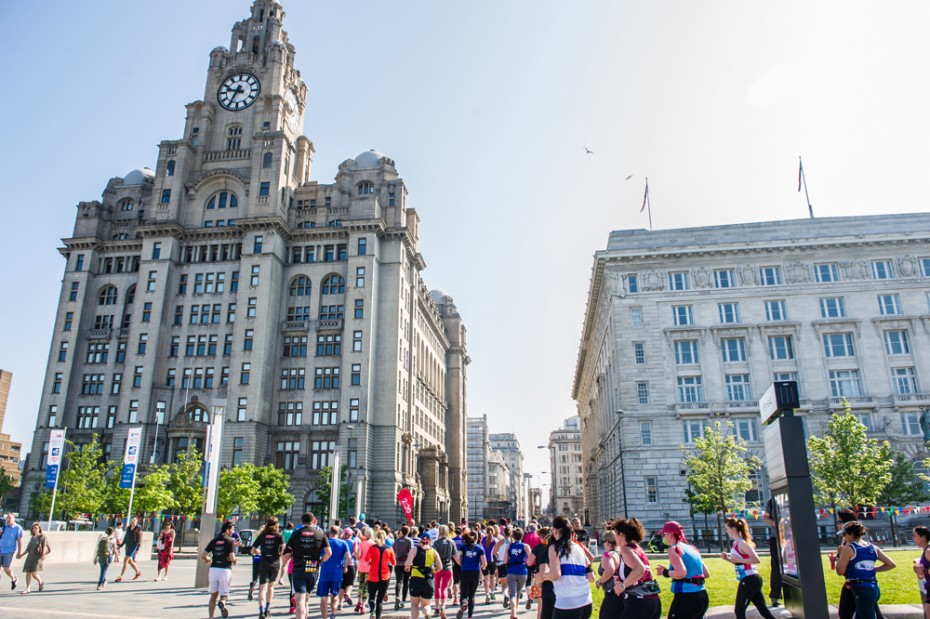 Through the streets of Liverpool

I lost Ian around the 5ish mile mark, as he told me to “smash it” and that he was going to slow it down a bit. I’m not going to lie and say I felt strong, but I was able to keep pace, and even when I felt I was slowing the pacer never seemed to get any further ahead of me.

The final few miles are along the River Mersey. Last year I believe there was a headwind which would have made this part difficult. This year we just had the baking sun to contend with. I remembered this stretch from when I ran the marathon in 2014, and knowing it was pretty mind numbing  I tried to encourage those people around me, pushing them along. I was starting to struggle myself and was grateful that the finish line was just around the corner, albeit the corner being a couple of miles in the distance.

I know I have praised the pacers enough already, but as the finish line came into view they really gave us a virtual kick up the backside, telling us to get our PBs and insisting that we sprinted for that finishing line.

To say I was amazed when I crossed the line would be an understatement. I had actually come ahead of 1:45.00 with a time of 1:44.32, a huge six min improvement since my last half marathon in November. Ian wasn’t far behind and despite being overtaken by a man dressed as a banana got a minute PB himself.

There was no goody bag as such at the end, but you could help yourself to bags of Haribo and crisps, or a banana for those wanting a healthy option. You were given your medal/s and there was also a tech t-shirt for everyone.

Attached to our race number was a token for a free pint of beer, so first stop was the bar before heading out to the staged area where the bands were playing. Sun in the sky, PB in the legs and a cold beer in your hands, Sundays don’t get much better. Sadly (for Ian) he had to run the mile race with his daughter, which after two pints of beer couldn’t  have been much fun.

I’ll certainly be returning again next year. I know Edinburgh is a popular run with many of you, but for those looking for a good alternative you cant go wrong with Liverpool. Good atmosphere, interesting route, pb potential…………………………..and free beer!!!

Entry details for 2017 can be found here.