There were some outstanding performances during April, leaving the Club Committee with another difficult decision when selecting their Member of the Month.

Several members were nominated by their club colleagues, with Finn Affleck-Brodie (silver medallist at the NECAA 10,000m Championships) and Hannah Cowan (running several parkrun PB’s and continuing to shine for the TBH Juniors) both receiving recommendations from the Committee. 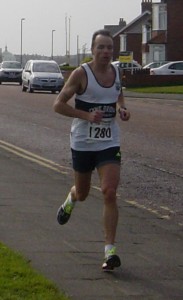 But the MotM for April 2016 is Terry Scott

Terry made his marathon debut at the 2016 Virgin London Marathon and ran round in a remarkable time of 2:35:57, finishing in 167th place overall (25th in age category) and posting a new MV40 club record.

As any marathoner will attest, just completing the distance is a fabulous achievement, requiring mental and physical strength in equal measure, but for Terry to run his first marathon in such a manner was deemed worthy by the committee to win April’s award.