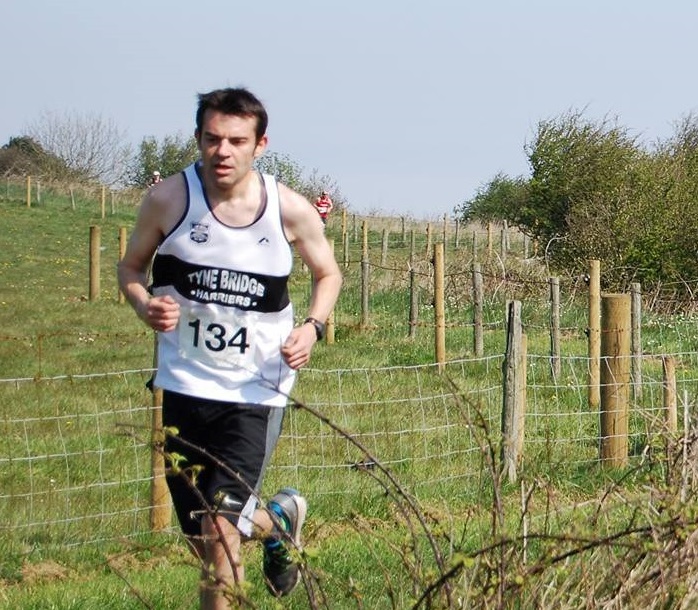 David Anderson takes us along the North York Moors coastline and prays he doesn’t have trouble with wind.

Ravenscar Half Marathon: Sunday 8th May 2016

The course record – 1h 25m – was achieved last year, so you can see it’s not a fast PB course.

The Race is billed as a 13.1 mile challenging off road half marathon, starting from Ravenscar Village Hall (midway between Whitby and Scarborough) situated 700 feet above sea level and overlooking Robin Hood’s Bay in the North York Moors National Park. The route gently descends the beautiful coastal path along the dramatic sea cliffs, with panoramic views down the coast line towards Scarborough. On reaching Petard Point it goes through Staintondale, via open fields, woodland and the disused railway line, until you reach Cloughton Wyke. Then its back towards Ravenscar on the coastal footpath via the picturesque roller-coaster of Hayburn Wyke (that’s a nice way of saying a killer of a down and uphill section that will make your legs and lungs burn). The good news is the homeward trek is full of stunning sea cliff views (although you’ll still be sweating from the last bit and hoping for the sea wind not to blow). 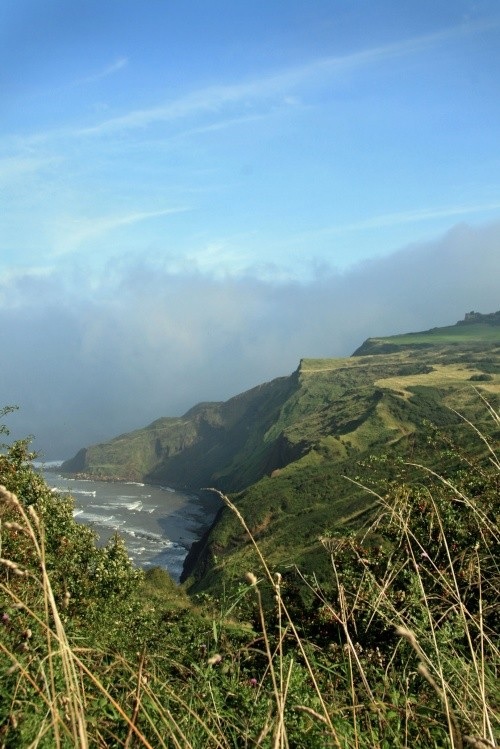 I wasn’t really fit to run a half marathon but a few friends wanted to do it, the weather was fine – so why not?

I didn’t look up the route or past times and arrived just as the race was setting off. Although I was initially at the back as the race started, you can see from my splits how the miles went so I managed to gain a few places early on.

To win this race you need to do a fast first mile as once you reach the cliff tops it’s very difficult to get past anyone. 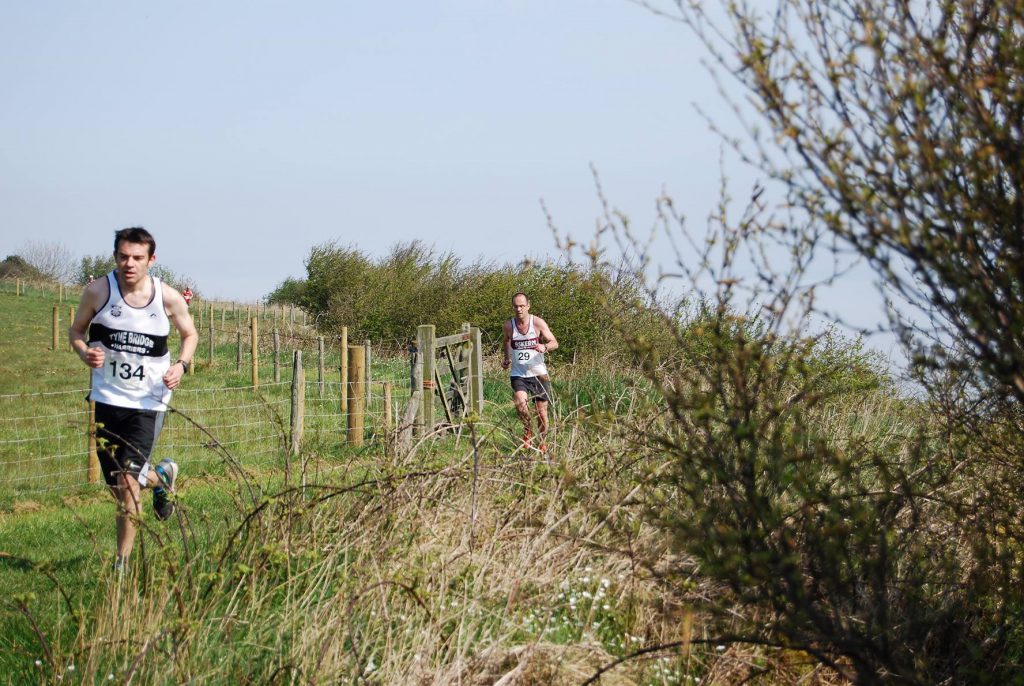 TBH veterans who have done Hardmooors 50/100 will know this course as it forms the last part of the ultra. I can’t imagine doing the Ultra though as this half was enough for me. The course is an out and back, with the first bit definitely easier than the second. I haven’t done much running along cliff tops but found it fun, if fairly dangerous! Let’s just say you wouldn’t have liked a strong wind here. Cliff top running also provided stunning views of rolling mist, though you might say spectacular as it was quite ghostly. Apparently it’s the town that never was.

The route was well marked, with lots of lovely, friendly motivational marshals and water readily at hand along the way – sorely needed on day like this. I stopped at every station and had a cup. You certainly don’t want to get dizzy dehydration spells along cliff tops do you?

The race was organised by Scarborough Mountain Rescue and all funds went to this very worthy service – much better than a medal or another t-shirt.

Not sure how high altitude affects your running but after a couple of miles my breathing was heavy – as if I had already ran a marathon. At about 3 miles you cross a stream. I was running with this lad (Kevin) for quite a bit, about 9 or 10 miles. As you can see from the photograph below, there’s not much room to get past people. 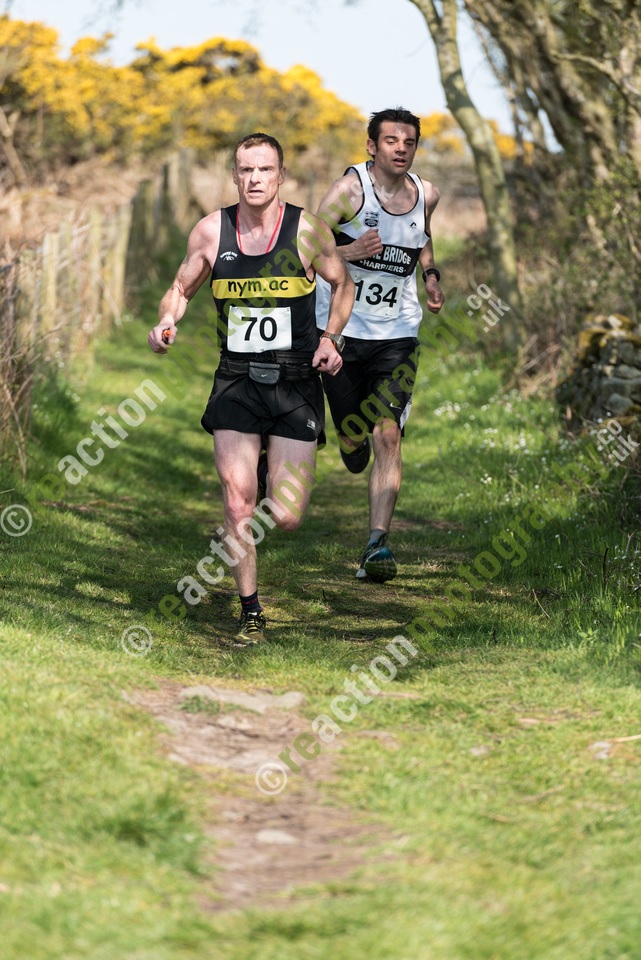 It was the first either of us had tried this half though he said to keep some for the second half; as it was harder according to his mate.

As you can see from my mile splits from 8 miles onwards, the terrain got harder. On a disused railway line there was a huge sunken staircase and some safe(!) looking bridges, all great fun. And when you thought that was it. Another set of stairs, which totally wiped you out. Thankfully at Petard Point there was a lovely marshal with W A T E R aaahh.

You couldn’t get a nicer cup of water. Got sunburnt in the vest but first bit of sunshine of the year so can’t complain.

There were a few more uphill roads to the finish. Really enjoyed this, though very heavy on the knees all them bloody stairs. Highly recommended unless you are marathon/ Ultra/ Tri training for a big event as the uneven ground could cause injury.

Thanks very much for fantastic organisation. Scarborough and Ryedale Mountain Rescue Team also gave us plenty of juice, water and flapjacks while we tried to recover.

On the roads there and back I’ve never seen so many sausages it was like going to the butchers – viscera all over the place.

Permanent link to this article: https://www.tynebridgeharriers.com/2016/05/11/2016-ravenscar-half-marathon-race-report/