Bam Rashid leads us around the streets of Gay Paree.

On 2nd October 2015, I have decided to do Paris Marathon as I didn’t get the general ballot for the Virgin London Marathon (VLM) 2016 (before I’ve got a club place from TBH). As this will be my final year in the UK, I would say I need to do at least one of the grand marathons in the world.

Paris would be my 6th marathon in three years since I joined TBH. Even though I have done quite a few, I still find training is a huge commitment, not just in miles but time as well. Having to recover from a broken collarbone in August 2015, the training didn’t go as well this time as I’m struggling with sharp pain in the right shoulder when running more than 8 miles, a tough one to deal with and this re-occurrence had been my problem since coming back from the injury, but knowing me, I know I had to go with it.

The marathon weekend arrived quicker than expected along with the usual pre-marathon nerves and panic of ‘have I done enough’? I’ve been missing out, at least, four long runs on my 16 weeks training plan due to travelling and all sorts. In the end, I decided with advice from fellow marathoners to take Paris Marathon as my training run and to race London Marathon in 3 weeks time. A wise decision to be made, I can’t race both, saving up my legs to race London and appreciate TBH for giving me the opportunity to run London.

Flying from Newcastle on the last flight to Paris via Air France on Friday. On Saturday, I went to the Expo to collect my number, and it was an eye opener. Typically I’m used to a local retailer turning up with some stock, but no, the Paris Expo was huge. Two new t-shirts purchased later, running belts, and leisurely jaunt through the streets of Paris, ending with the Eiffel Tower in the background. This was a lovely way to calm the nerves before Sunday’s big event, and finished off with pasta, sushi and pastry!

On marathon morning, I turned up at the Champs Elysees and was blown away by the sheer number of runners. Paris is the biggest race I’d taken part with 55000 runners announced to participate. The weather was warm 11 degrees in the early morning and 20degress anticipated during the race. I entered my 3:45hours pen and quickly got chatting to a couple from Morocco, Switzerland and Welsh guy who just completed Cardiff half marathon two weeks before. The mix of runners was truly international, mainly French, but a lot of UK and Irish runners, plenty from further afield and not forgetting another runner from Brunei too. The atmosphere at the start was electric. I was conscious not to do my usual at the commencement of a marathon and go out like the clappers only to crash and burn later on. My aim was to keep 8:50 min/mile pace and come in under 3:55 hours marathon (I was sneaky to get a minute PB for Paris to gain confidence for VLM). 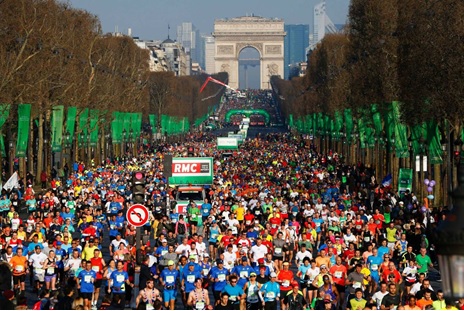 The first few miles passed quickly with really brilliant support from the crowd; it helped that I had my name on my TBH vest.  I had two shouts “Come on TYNE BRIDGE HARRIERS!!” from the same Swedish guy on two separate occasions (I assumed he was Swedish as he wearing Sweden crown jumper). He was passionate like he knows TBH quite well with the same kind of shouts twice. I point my finger to him to show my appreciation and smile. The runners were packed tight; I can feel shoulders and few elbows along the way, and it was hard to settle into a decent pace.  Eventually, this settled down, and we were off through Paris. The roads in Paris are a mix of tarmac and cobblestones; luckily we in TBH had trained for this as we train regularly along the uneven path right after the swing bridge (joking btw). 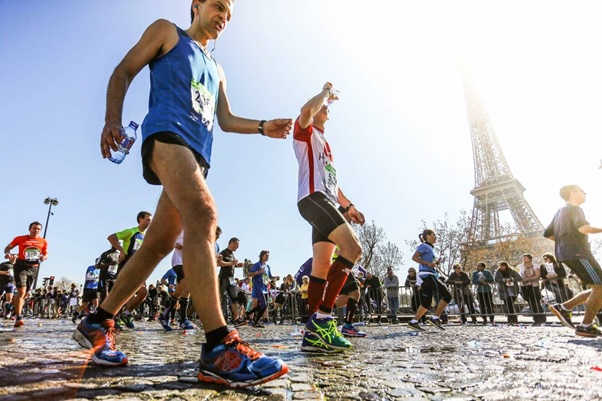 I was doing slightly faster than I intended too and did 3:48 hour expected time after reaching 13miles and disaster struck after 14miles. Blisters! I was doing well and what a time for it to happen on both pinkies (I would have posted a picture, but it won’t be appropriate to show here) to slow down a little bit; I can cope with painful shoulders, but blisters are a killer, and onwards I began to walk, run, walk. I knew the causes of a frozen shoulder or shoulder pain. It is not the nicest feeling. Then I realised that while I was running Paris, I started to miss out on few beautiful landmarks, I totally missed Notre Dame – How? I don’t know because it is huge. How can I lose such a landmark? 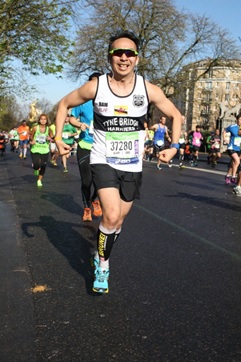 Me and for being me, I amazingly can spot official photographer and strike a pose on every camera op

Just at the point when you’re wrecked and looking your worst, along comes a high definition camera, brilliant. My picture lived up to expectations.

Right after that, I trotted past the Eiffel Tower. I managed not to miss that! Then before I knew it I’d passed the 20mi/32k mark and realised I only had another 6mi/10k to go. “You can handle and absorb the pain Bam!!” I thought. Those who knows me know that I rarely swear, but I swear like I never swear that day, in my language to be decent to other runners beside me

The final stretch of the marathon is through the Bois de Boulogne. One of the unique features of the Paris Marathon is this open park which participants spend the last 3.5miles of the race in. Spectators tend to be a bit thin on the ground and it’s easy to feel a little lonely and may discourage you and let your pace drop. And then, eventually, we emerged from the park and we’re onto the finishing straight for the last 500m with the Arc de Triomphe up ahead in the distance. The crowds are back and at this point just before my final burst, I hear someone shouted “Come on Asari!!”, Barely I know someone shouted using my real name other than my office mates. I waved at him; he must have been the family of another Bruneian, who ran the course; must’ve been me running with the Bruneian flag half a mile to the finish line. I managed to find something of a sprint to the end. Across the line, I checked my watch, and I’d clocked in at 4hrs 11mins 07secs! I take it considering the bad blisters I have in both of my feet. In all, 41,708 champions of 55,000 registered participants that day. It was an honour to be part of a well-organised grand marathon. A saying from one of the Wallsend Harriers lad as I finished the race “There is always a Tyne Bridge in any race”. Proud to be represent the only TBH in Paris! 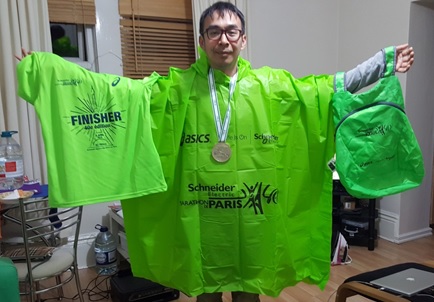 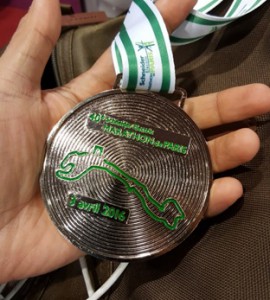 Paris wasn’t my quickest marathon but as I said before its part of my training run. I’m glad that I didn’t push that hard, were sneaky in the earlier part of the course and got blisters after halfway; a blessing in disguise I supposed so I can be fresh for London Marathon. Paris Marathon was without a doubt, the most amazing running experience regarding its support and class. Water stations were spot on in every 3 miles, full of water, bananas, oranges, jelly babies and gels. I just need to try to bring the same race plan for London Marathon and hopefully make it a PB time for my last marathon this year.

Permanent link to this article: https://www.tynebridgeharriers.com/2016/04/12/2016-paris-marathon-race-report/