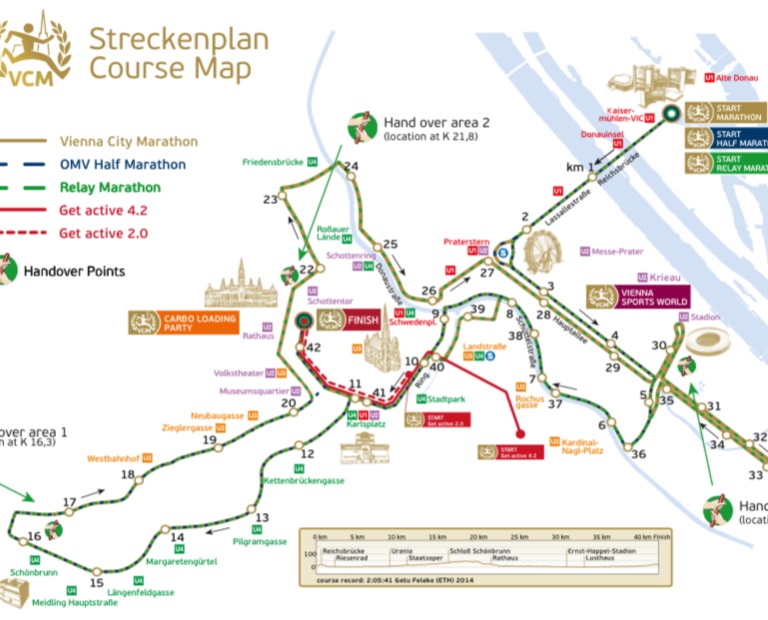 Neal Richardson takes us on the highs and lows of marathon racing.

Running races in countries outside the UK is always going to be logistically trying (not to mention expensive). However, when you have family members living in the city of the chosen event it makes life a hell of a lot easier, not to mention less stressful on the bank balance. So as Karen’s brother Stephen and his family have been settled in Vienna, Austria, for the last 27 years it has made running in the Vienna City Event an easy hit for us in the past.

The event consists of three races in one, the full marathon, a relay marathon and the half marathon, which is the one both Karen and I have ran in the last couple of years. However, having been knocked back for the London Marathon I decided I would sign up for the full marathon in 2016, with Karen deciding to run the half, which would compliment her training schedule for the forthcoming London marathon – as she had been successful in this year’s club ballot. So the trip was booked for the 6th April and to stay for a week as the event itself was not until the 10th April.

Training for a marathon was a new experience for the both of us, as to turn up and “wing it ” on the day was a recipe for disaster. So we both decided that our goals would be to follow a marathon plan and try and lose a few kilos each on the way, and also to use Si Kristiansen‘s S&C classes to bolster our stamina. The friendship of TBH members kicked in and a special word of thanks to Mairi Clancy, Neil Banks & Derek Vardy who accompanied us during the tedious training runs and fair play to Neil for providing some innovative routes through North Tyneside.

Without boring the reader to death, the training went as well as expected but what I will say for any virgin marathon trainer who may be reading this, is that every injury I have ever had seemed to resurface along the way, especially on the long runs, so stock up on plenty of pain killers if you decide to go down this road of torture.

We headed to Vienna on the morning of the 6th April bright and early, transiting through Paris as the recent sad events in Brussels had impacted our original plans. A rescheduled itinerary had sadly put us in the hands of the incompetent Air France, who immediately set out to sabotage four months of training by not only causing us a 10 hour flight delay but also by losing all our luggage on the way. This included all of Karen’s running kit including TBH vest, as she had not taken my advice of putting her running gear into her hand luggage – a tip I had taken from Rachel Adamson‘s recent trip to the Berlin Marathon – and instead had chosen to use the space to carry Swizel lollies, Fruit Pastels and Wine Gums. Although they came in handy at our lowest ebb, they’re not very conducive to running races.

We eventually arrived in “Wien” close to midnight, exhausted and luggage-less. But to make matters worse Karen had begun to feel really unwell after failing to shake a recent virus. For the record, the cases turned up two days later, albeit one of them just about totally destroyed (Karen really is unlucky) but at least we could now get a training run in before the big day. 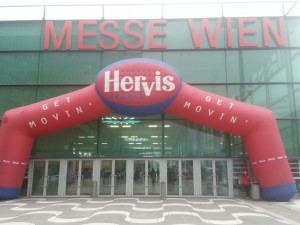 As with most mass events in European capital cities, registration and number collection is held the two days before the event and is coupled with an expo with various companies peddling their wares. Vienna is no different, with the process opening on the Friday before the race and continuing throughout Saturday, with no race numbers available on the race day.

We travelled into the city on the Friday to collect our packs, with Karen still feeling unwell. I managed to persuade her to take advantage of the medical advice on hand at the expo and get a doctor to give her the once over. The look on her face when she re-appeared just confirmed what we both already knew, her Vienna race experience was over before it had started as the doctor had sounded her chest and strongly advised her not to run due to a chest infection and to rest and recuperate as she had her own date with destiny in London in two week’s time. 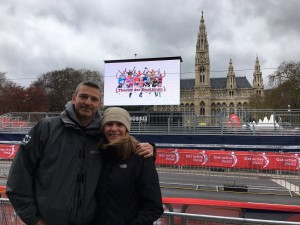 We were gutted, as the plan was to run as a team and achieve our goals using each other. But we both knew it was the right decision and that her health had to take priority. Surprise surprise there are no deferrals or refunds available for dropping out. However, you can buy extra insurance for such events which I had failed to take as I had thought the €70 for the half to be more than enough. No wonder people sell-on race numbers (not that we would do anything like that!).

With my training gear now available I was able to at least get a couple of easy runs in around the countryside close to the family’s home. The scenery around this area really sums up Austria and is quite stunning. One of the most enjoyable moments was visiting the local castle which is straight out of the Hammer House of Horrors. For any one who has not Visited Austria I can only implore you to get it on your bucket list. The mountains and lakes around the Salzburg area are truly magnificent, with both summer and winter skiing resorts in abundance. Camping is well catered for for those on a smaller budget. Vienna City can be a bit pricey in certain areas but again there are prices to suit all budgets, with cheapish food on offer at several places. The people who organise the VCM event also organise combined Race & Hotel packages. All I can say is that Vienna is a stunning city, the architecture is amazing and there is loads to see and do.

Race day arrived, and with most roads closed within the city limits the normal routine was to park on the outskirts and get the underground train to one station before the start line at the Vienna International Centre. The mile between the station and start line would be used as a warm-up. This was the point where we all went our separate ways, with Karen and the family going to a pre-determined vantage point to offer support and hopefully be at the finishing stretch with beer and an apple strudel for the returning hero.

I had been allocated start point 3 due to my predicted time of 3.5 to 4 hours, but to be honest in years gone by it’s been a free for all, with the pantomime horses and Hitler lookalikes (howay man it’s a joke!) in with the elite Kenyans. In fact, just getting into the starting pen was a bit of a mare due to the congestion and no stewards on the entry points, but being a English gent I stuck with my allocated pen, which is more than I can say for most.

Once into my pen, I waited for pens 1 & 2 to go, as the start is staggered due to a bottle neck on the other side of the River Danube. But it wasn’t long before we were off, and the first school boy mistake soon became evident . I had set my Garmin’s low pace alarm at 8.15 min miles, but with all the congestion I just couldn’t get a head of steam up and the watch was on fire, driving me (and everyone around me) mad. Eventually the field of runners opened up and I could push on silencing the Garmin. The miles flew by uneventfully and I managed to get my head up and admire the stunning architecture. I was feeling really strong and reached the halfway point in 1h 44m, which was bang on schedule.

This is where the half marathon race finished so the congestion eased significantly. The next milestone was 20 miles, which I wanted to be at around 2.45 or so. Again this went well, reaching the 30K mark in 2.28. This left me 60 minutes to do the last 12K and achieve my 3.30 target. The next 7K section of the course is a straight tree lined road with a turn around a band stand at the bottom. Runners run down it, turn around and head back on the other carriage way, passing runners in the opposite direction. I found this section of the race demoralising, knowing you have to make the same journey and are basically going in the wrong direction. And there is virtually no crowd support. This is where I started to go downhill, the legs suddenly became heavy and my pace slowed. The mental doubts started creeping in (which I quickly dispelled) and like I had been previously warned by Sean Maley of North Shields Poly and my physo, I just had to “dig in like every one else on the course for the last 10K”. 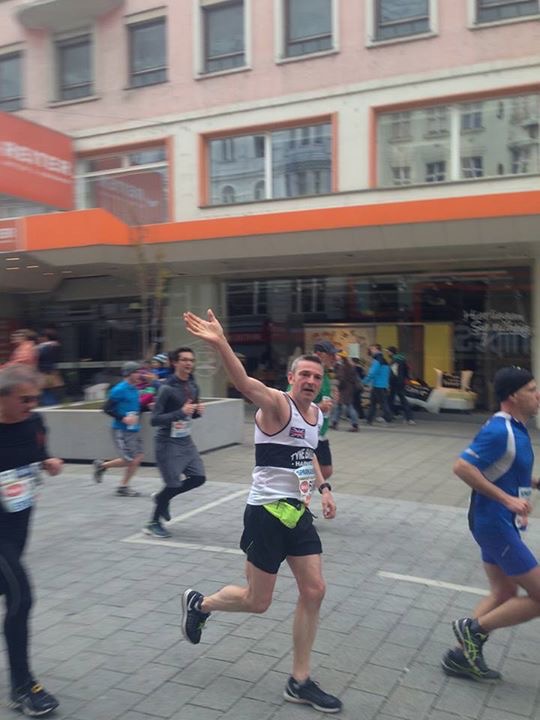 The Garmin started to scream again with the slow pace alert being activated, only this time it was telling me I was failing when the road was clear, so I had to try and disarm it on the move – not easy when the lamp oil is not what is was – but I somehow managed it.

The last 5K of the course was the toughest I have ever ran. The good thing is you are back in the city centre and the crowds are back, so the support from the streets increased and the bands re-emerged. However they could have played the Charge of the Light Brigade and it still wouldn’t have made me go any faster. I was fading fast.

Eventually I reached the finishing stretch of the race, but the last 500 metres seemed more like 5000. But the support from the crowd drove me onto the finishing line, where apparently Karen and the family were in the the stands with a Tyne Bridge coat held high for support, but I was that tired I never seen it and was only interested in getting over that line.

I crossed the finishing line in 3 hours 37 minutes & 18 seconds.

I exchanged handshakes and pleasantries with an Austrian guy and then picked up my all important finishers medal and goodie bag – which to be honest is pretty rubbish, containing water, Powerade,  an apple and banana, a protein bar and some Jellies. Err that’s it. Official tee shirts can be purchased for another €30!

I was reunited with the family and had an emotional moment with Karen. I know she is going to smash it in London on April 24th due to all the hard training she has put in over the last 4 months.

To summarise;
Flights to Vienna from Newcastle from various airlines (no direct flights) approx £170 or cheaper. My advice, fly Luthansa via Dusseldorf. We’ve never had any hassle with them and avoid Air France.
Race fees are staggered, the earlier you sign up the cheaper it is. We paid €90 for the marathon and €70 for the half.
Accommodation is something I cannot comment on, but like I said, they do run/stay packages and the hotels are beautiful.

Will we be back next year?  You bet we will, its hard not to love Vienna and Austria as a whole.

Will I do another Marathon? I will tell you once the Ibuprofen kicks in.

Permanent link to this article: https://www.tynebridgeharriers.com/2016/04/11/2016-vienna-marathon-race-report/