Louise Kelly discovers whether she’s cut out for office life.

It doesn’t really matter how your training goes before a race. At the end of the day, you either have a good day or a bad day at the office. For me the week leading up to the North Tyneside 10k was very much showing all the signs of a bad day. I had plans of trying to go sub 60 but it looked like it wasn’t going to happen. My right hamstring had went on the Monday during what was suppose to be my long run. Thankfully I managed to secure an appointment with Tyne Bridge Harriers very own physio extraordinaire Sophie Marr. It was with a sigh of relief that she told me it was down to over use and that I needed to rest it as well as stretch it out plenty. So no running for me for the rest of the week until race day!

With that in mind I reassessed my goals and decided just to try and get round without stopping.

Race day arrived, and with it the usual pre-race jitters. Everything that I thought could go wrong did. The clocks had gone forward so I had only managed five hours sleep. I had forgotten my morning coffee. Usually takes me two cups before I become a functioning member of society. Missed the metro, which meant I missed the baggage bus. I could go on and on here. After the usual pre-race ritual of queuing for the loo, I made my way to the start area, catching up to Lucy Turzynski just as she was clearing her nostrils out and avoiding a near miss! (Very dignified there Lucy by the way!)

In the actual start area I stood with a few of my fellow group 5 runners (Vicki Deritis, Evie Maholam, Elaine O’Mara and Margi Eccles) and discussed if we had a particular time in mind. We were pretty much all just wanting to get round the thing apart from Margi who really wanted to PB but didn’t feel like she would.

Once we were off I could see Joanne Wood just ahead and I managed to keep her in my sights for a mile or so, even over taking her at one point although that didn’t last long! Soon the downhill sprint of Borough Road approached and I enjoyed the chance to relax the arms, stretch the legs and let gravity do its work as I made my way down. As I rounded the corner, I realised that my lace had come undone. Must have forgot to double knot it. Darn it! Quick detour to the side to fasten and off I went.

First mile marker and a quick look at the Garmin showed I had done the first mile in 9:12!!

Louise, you’ve gone too fast! You’ll never keep this pace up! Slow down!

Along the course I went and the first TBH supporter I see is Karen R stood on top of a bench holding a cup of coffee. Feelings of caffeine envy arose but soon abated. Along I went, spotting a runner that looked like he was suffering from cramp in his calf and having it massaged out by a lady in a Jarrow vest. Along I plodded and who do I spot stood at the top of the first of the Priory banks? None other than John Hurst and Chris Graham! It was here that for some stupid idiotic reason that I felt it necessary to sprint up the hill, wildly swinging my arms and overtaking runners, while shouting “It’s all in the arms!” at them both! I can imagine they must have exchanged a strange look with each other as I passed! The second mile marker approached, time on the Garmin showed 9:10.

The second Priory hill loomed and up I went, spotting Danny Fletcher and Jane Shearer on my left. A quick thumbs up and a cheeky tongue sticking out and I marched on to the top where I notice Kenny Mac and Leodhais. Both appeared to look slightly confused as to why there were so many people running up the hill. They must have been planning on doing the Priory Hill shuttle session that morning! Haha! On I went, the wind blowing in the right direction for once, enjoying its cooling effect on the slight decline as the course started to hug the coastline. The water station loomed and I resisted the urge to do my usual wet t-shirt competition look. It wasn’t warm for it. This also signalled the approach of the halfway point and the Garmin showing a split of 9:54. A bit slower than the previous two miles but I expected that considering how fast I’d ran them! 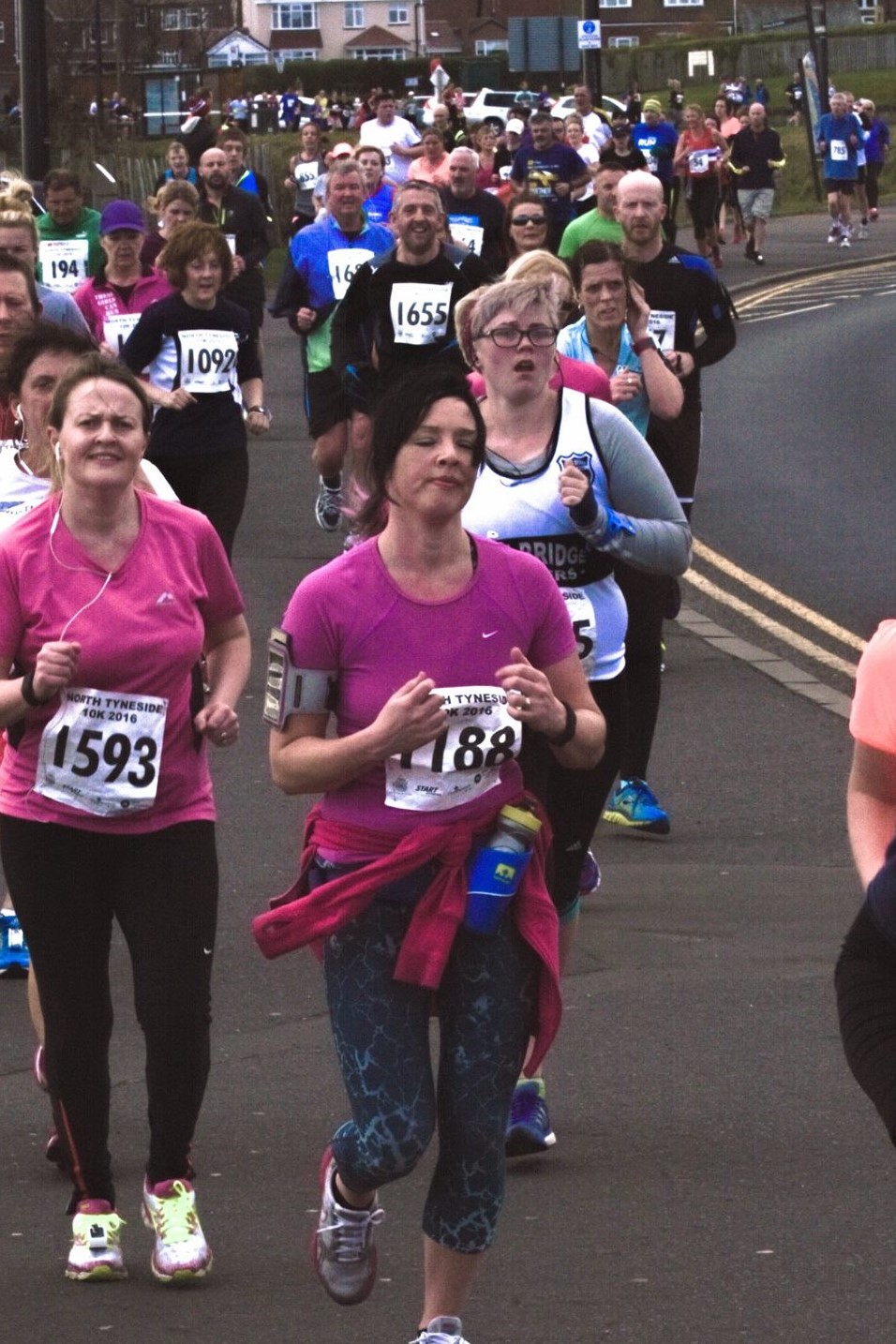 It is usually at this point that I’ve been arguing with the inner voice that always accompanies me during every race, even parkruns. It is made up of all the insecurities that I have and usually goes ‘You can’t do this. Drop out, you know you want to’. Today it was silent, not a single peep which I found very odd. The next two miles were uneventful but enjoyable, mile four 9:31, mile five 9:52. Not long after the mile five marker I spotted Catherine Eaton and Jenny Logue holding up a plaque made from a TBH vest. A shout of “Come on Louise you’re doing fab!” from Catherine was met with “I’m retiring after this”. “No you’re bloody not!”, was immediately fired back at me!

The finish line was within sight and I could see other runners that had finished walking back along the course including our very own Lucy T from the nostril clearing incident at the beginning! Some words of encouragement were shouted at me and I headed off, turning into the home straight. It was here I made the final push, channelling my inner sprinter who seemed to be eager for the chance to run and fired off with that extra burst of speed for a sprint finish, passing at least 9 other runners before I crossed the finish line with a Garmin time of 59:00 although I would have to wait several minutes for my official time. Off I went to grab my goodie bag for the free socks and t-shirt.

I do love a good pair of socks! Although the best thing was the unexpected goodie bag filled with Easter treats from Sarah Danielles! After chatting with other TBHers at the finish I made my way towards the bus and sat down with Rachael Estrop, Margaret Hagood and Rachel Case. It was while on the bus that my phone went off, alerting me to a text message with my official time. A tentative look would reveal that I had a chip time of 59:06! Which meant that a had achieved a PB by a whooping 6 minutes and 24 seconds!

So not a bad day at the office after all!

Thanks to Ian Harman for the photograph.

Permanent link to this article: https://www.tynebridgeharriers.com/2016/03/29/north-tyneside-10k-race-report-3/