Sara James reports from the splendour that is West Wales.

A trip back to my homeland is always going to make me happy.  So when Vicky Forster suggested a trip to West Wales, to where she still has relatives residing and they have a race called “Race the Train”, a 14 mile multi-terrain race, why would you not want to go??

Vicky made an open invite for people to register interest and she sourced an amazing converted barn for us to all stay in.  This saw Nicola Brady, Euan and Pip Clubbs, Guy Rintoul, Gemma Brady, Tina Fletcher, Vicky and myself starting the long drive to West Wales.  Euan and Tina came to cheer us from the train (hopefully Euan can get his chance to try to beat the train next year)

Having a race start at 2:05pm on a Saturday gives you plenty of time to a) have a lie in; b) ensure you get your food intake sorted well before the race and c) decide that you have too much time on your hands and you just want to get on with the race.  We decided to arrive in Tywyn early and find somewhere for lunch.  Hmm, none of us were sure what we wanted to eat so we hit the local Co-op.  We were wished well in the Co-op and a variety of purchases were made, perhaps most impressive was Guy’s French stick and Lucozade sport combo… Salmon sushi rice and bread roll or a hot cross bun were the other potential race winners.  Perhaps Sinead [Coffey] needs to do a nutrition update session

We spotted some more TBH near the start line, only to then realise they were in fact Penny Lane Striders.  We asked them to join us for an obligatory joint pre-race photo.  We then chatted to a man in the car park and asked how he was expecting to do.  He was aiming to beat the train by 10 minutes!  Okay…..  We wished him well. 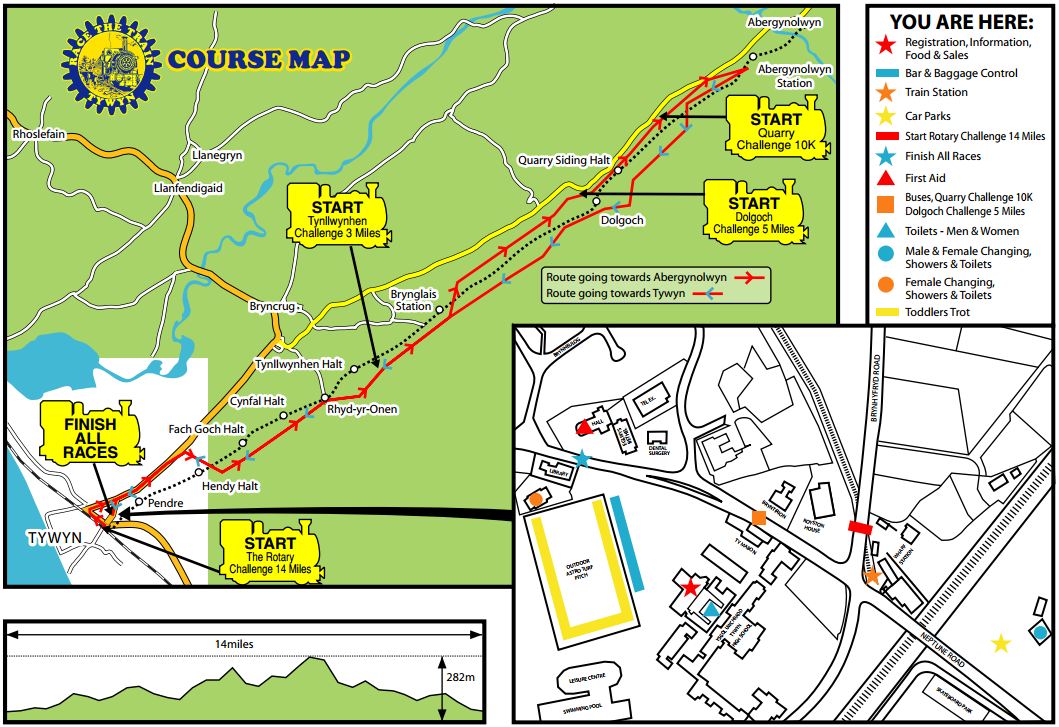 Vicky decided to take her phone with her and capture the “race atmosphere” as we ran.  It was going to be a run to enjoy, not race.  We lined up on the road next to the steam train railway station in Tywyn and got ready for the start.  Another TBH then came into view – Ross Palmer – who we believe went on to actually beat the train (just!)

Well done Ross!   With that there was a big “choo choo” and that meant our competition had started its race

Off we went – the first mile took us out through Tywyn on roads, past the ice cream shop and then veered off down a country lane.  We rounded a corner and there was a giant puddle from a stream with strategically placed rocks.  We went through a farm and then onto grass and the rolling countryside.  Another farm came into view and we ran through the middle of the farm and Vicky spotted her relative Emrys, who was helping man the water station.  Vicky wanted a hug off him and I wanted his isotonic goods

The sun was out and it was hot!  We gradually climbed and then “the hill” came into view at around mile 3 – it was a rapid descent!  Think Alnwick xc downhill but on more of a camber.   We went on and then had a metal gate to climb over.  Vicky kindly lent assistance at this point.  She must have remembered Guy’s comment outside the Co-op of “you are quite short aren’t you?  Do you usually wear heels?”  Not to race in mate 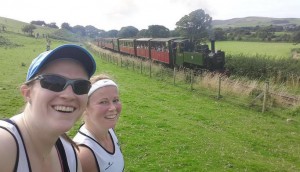 Vicky & Sara Vs ‘the train’

We’d heard distant “choo choos” and then realised our competition was about to bear down on us.  We decided to stop and wave at everyone as they came by on the first train. On we went, and we looked to our right  and saw a line of runners halfway up the hill, running along a track.  We shouted support to Nicola (who knows if it was Nicola…).  On we went and just before mile 7 someone shouted “Vicky”!  It was Vicky’s relatives.  She had a lovely mini reunion with them and I shouted “catch me up”.   Little did we know that mile 7 signalled the start of the fell type running.  The race literature had said that the first half of the race was easier and the worst was to come…  A very narrow track meant that you had to be careful with your footing in case you lost it (and went down the hill!).  It was impossible to overtake at this point but you could surprisingly get up some speed at certain points once you got into a rhythm.  A few runners decided to get out of my way by jumping up onto the bank and letting me pass.  Some of the highlights – 7.4 miles, you could smell the decaying sheep before you saw it and you had to navigate a small rocky stream, mile 8 with the steps onto and over the bridge and the beautiful waterfall (which some of the focused TBH didn’t see), then up a steep woodland trail to the bog….

Vicky rejoined me for this hilarious part of the race.  We’d already been warned to go to the left hand side of the bog (things you pick up whilst chatting with the other runners around you).  I decided to even go behind the tape at this point as I almost lost a trainer.   Out we went onto more narrow woodland trail and there was a shout of “hole”!  Yep, it was definitely a large hole in the ground, to be avoided.  Made a change from “bollard” or “bin”.   We avoided tree roots and rocks and chatted with more runners.  We encouraged another female club runner who we saw walking and she promptly burst into tears on us at mile 10 (she did finish

).  We then looped back onto the same terrain as the first few miles.  I then realised “the hill” was coming into view (mile 11).  The camber was difficult to even walk up it, let alone run up it.  We reached the top and carried on, cheering Mr Camelbak on and spotting Emrys at the farm again

On we went and then we were back onto road.  We rounded a bend and we had both forgotten about that giant puddle…  The photographer was lying in wait and Vicky was gutted that she hadn’t just ran through it.  We continued and the last farm came into sight.  I recalled that was a mile from the finish and started to up the pace.  Vicky knows my pacing can be abysmal and despite her best efforts to slow me down (as she knew I would probably over exert) I recall her cursing – “Darn it.  You’re such a club runner – you have to pick them all off in front of you, don’t you”.  Yep.  I just wanted to finish.  We kept on going and we passed a lot of other runners and the ice cream shop.  For a split second I may have considered stealing an ice cream from a child but felt I demonstrated good restraint.  It could have made me ill

We had no idea where the finish line was but all of a sudden we rounded a corner and there were the tremendous shouts of support from our clubmates and the pounding dance music from the DJ.   We sprinted for the line.  We’d done it!

A fantastic medal and goodie bag awaited us and after we cheered on the last of the runners we relaxed in the middle of the closed road – dancing to the tunes (yes, I can’t have worked hard enough during that race), having a lie down and some getting a mini sports massage from Pip.  This was a fantastically organised and well marshalled race.  There were lots of water stations (starting from mile 1).  It was a tough race but so enjoyable, with a little bit of everything – road, trail, fell, woodland, streams, bog – enough to keep you interested and never boring.  It was lovely to see Pip’s facebook comment last night that this race has made her fall in love with running again.  It’s fair to say that we all enjoyed it and had a brilliant time – we’ve all left a little part of us in beautiful West Wales

Permanent link to this article: https://www.tynebridgeharriers.com/2015/08/18/race-the-train-tywyn-2015-race-report/