Many congratulations to Edwin Wong who recently completed the Hong Kong Marathon.

Edwin has sent this race report.

Whilst most people back home were sleeping, or more likely partying on a Saturday night in January, I was in Hong Kong, 8 hours ahead of GMT and taking part in the Hong Kong marathon. Having had a decent winter’s training, with the final few weeks of long runs in freezing and often blustery conditions, it was going to be a vast change to be running in more humid and warmer climes.

The previous time I was in Hong Kong was in the summer of 2010. It was even hotter at that time of year and it was during that holiday that I first found out about the HK marathon. I had run two half marathons prior to this, and I decided then that it might be nice to run the HK marathon at some point in my life. Onwards 4 years and here I was having already run in two marathons (both in Edinburgh) and having become a member of a running club… Tyne Bridge Harriers, (which of course hadn’t even been founded when I first considered this race!)

Registration for HK was in September and the 16000* or so places for the marathon race itself were sold out in a matter of hours and I was one of the lucky ones! (* a further 57000 runners were in half marathon and 10k races.) A winter of training passed by in a flash, the New Year came and went and it was time to travel to HK for the big race. With plenty of well wishes, I felt privileged to have so many friends and family who had supported me throughout the preceding few months, and on the big day, I endeavoured to make them proud.

Race day
I have to be honest, I didn’t sleep very well the night before. After trying to get to bed by 10pm, I still found myself awake several hours later. Before long 4am approached and I got up to get ready for the race. I had my usual pre-race breakfast before making the trip to Tsim Sha Tsui on the mass transit railway. I was travelling alongside half marathon runners and marathon runners from 3 separate races. I was starting in the challenge race, with entrants targeting a sub-4h whilst two other races that started later had entrants aiming for sub-5h and sub-6h marathons. 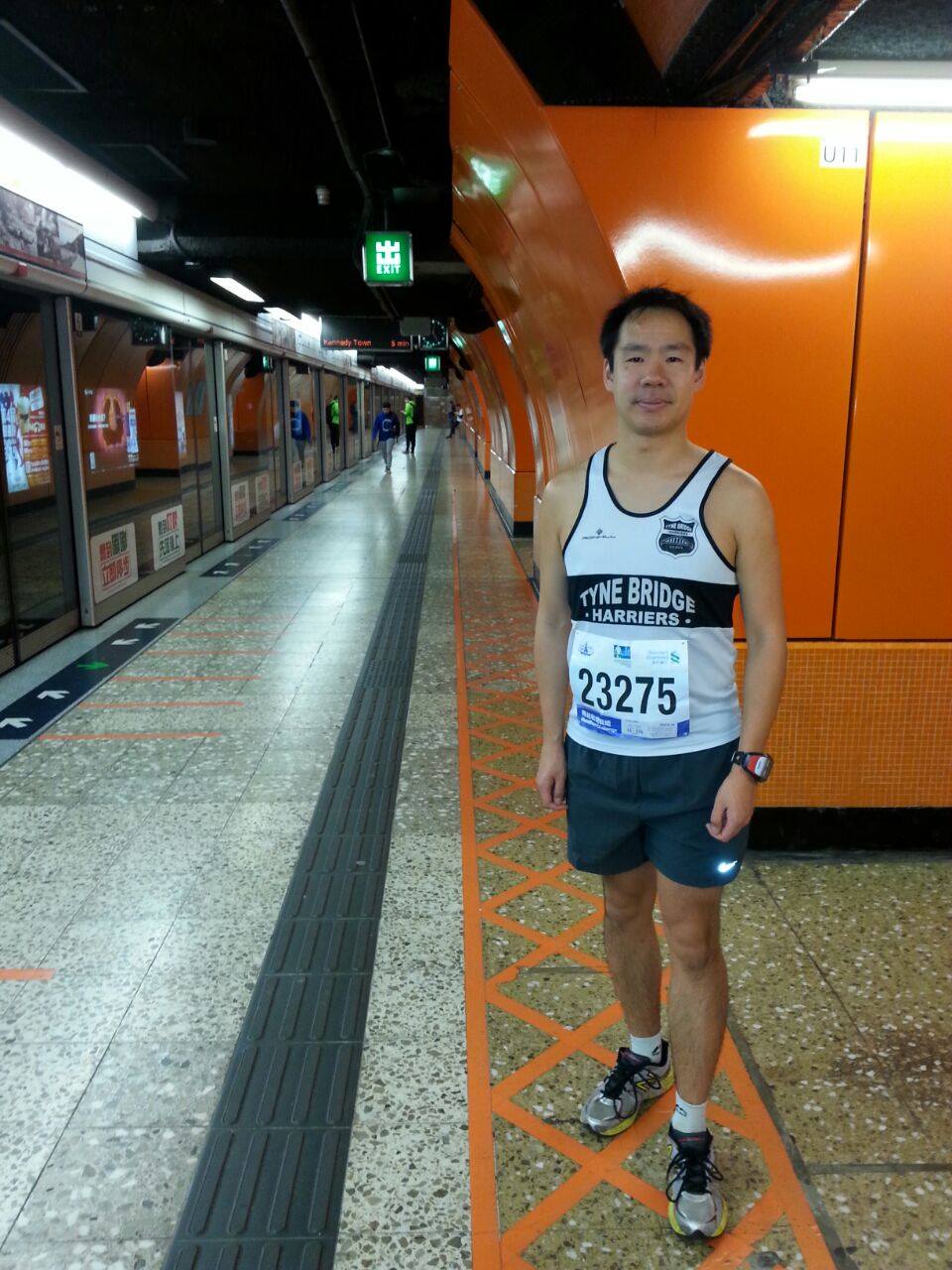 Catching the 5am MTR

As my start time approached, I made my way to a packed start area. It was still dark on the road that was similar in nature I’d say to Oxford Street in London. There were various announcements as to which VIPs had come to the start before a ticker tape celebration followed by the start gun!… And we were off!

It was very congested for the first couple of miles, weaving my way through the streets of Kowloon to get to the main carriageway over to the West. After around 3 miles, I got into my rhythm as I found enough space to run at my natural pace. I had predicted that 8min/mile would be a reasonable pace so the rest of the first 10k was spent steadily making up the time that I was behind. I was feeling comfortable in my running as we entered the first of two tunnels but the one thing that I noticed was how much I was sweating already! I knew that I would have to keep hydrated… However I really must learn to slow down at water stations that serve out of paper cups. For every cup that I picked up, I lost a decent measure straight away, spilt a measure as I tried to drink and probably managed to get a final measure inside me at each stop, which fortunately was at intervals of 3-4 km.

In total, in the first half of the race, there was that one tunnel (around a km long) and three bridges, the longest being the famous Tsing Ma Bridge that we easily ran along for almost 2 miles in total. A lot of the race was on the main highways, which meant a lot of long – albeit steady – climbs before long slow descents. Also, I noticed a lot of camber on the roads, great for fast cars, less good for runners. There were also 3 turning points allowing us to see many of the other runners on the course.

The second half of the race started well, although I was conscious of a little tiredness in my legs already. I maintained my pace and was averaging 7:50min/mile around now. I still hadn’t learnt to slow down at water stations to ensure that I took on board enough water and I was also conscious of the lack of support that resulted from running along stretches of highway. After yet another tunnel, which meant an abrupt descent and a decent climb to get back above sea level. I was then on the longest stretch of highway heading back towards HK island… And that’s when it my marathon challenge took a more difficult turn.

With 8 miles left, my pace was still good but it was starting to hurt a lot more. The legs were feeling heavy and my energy levels rapidly diminishing. I was desperately trying to imagine all of the wonderful TBH support that I normally have in the local races, lining up the highway and it worked for a couple more miles. However, with 10k to go, I felt as though I couldn’t go on… A few walking steps, and I was running again… albeit at a slower pace. It was at this point that I walked through the water stations to enable to be get some decent gulps of water and at one point, some cherry tomatoes!… My legs were tired and the muscles twitching, but there was no full on cramp…. Yet? Surely I could get to the end.

The HK marathon is considered difficult for various reasons. The warmth, humidity, early start and for me jet lag must have all played a part in making it live up to difficult expectations; in addition, the nature of the course as described, not least the final few miles, starting with a mentally sapping mile-long stretch running through the Western Harbour tunnel from Kowloon to HK island. I must admit that with ever tiring legs this stretch was never-ending… And when it did, it was with a sharp climb out of the tunnel and finally into some crowd filled stretches of road. By now, I no longer felt that I was running, slowly plodding up more inclines to the tops of carriageways, and down again, wreaking havoc on the very sore quads.

Finally, the km markers actually reached …39… 40… Still, it didn’t feel as if my legs were moving, my breathing was heavy and the heart rate had finally had hit the roof with every single step. 41… The longest ever km… It’s almost a shame, because this was where we were actually running through urban HK and this is the bit that I couldn’t appreciate at all. Then there it was, the green and blue of the sponsors… The finish approaching, I took a few more steps, the legs weren’t going to pick up any faster, but the arms lifted as I saw the finish line and anticipated the photographers in the distance…. Over the line… And the all important medal was presented around my neck. 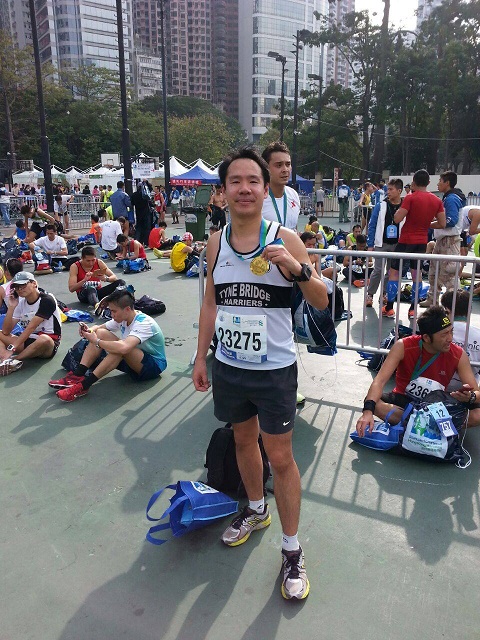 In summary, a tough race in its own right and as an overseas runner, there were additional challenges. The organisers of this race were excellent, and were very efficient throughout, though I have read they would love to have the marathon run through more of the sights of HK which would also lend the course to better access for supporters. Personally, I only wanted to run in Hong Kong because of my family connections, but I do suspect that if I was a local runner, I would be back to repeat the challenge. In the end, I finished just 87 seconds outside of my PB, but was my strongest first 20 miles or so of a marathon. It was a wonderful experience from which I have learnt a lot… But for now, one tired but happy TBH HK marathoner. 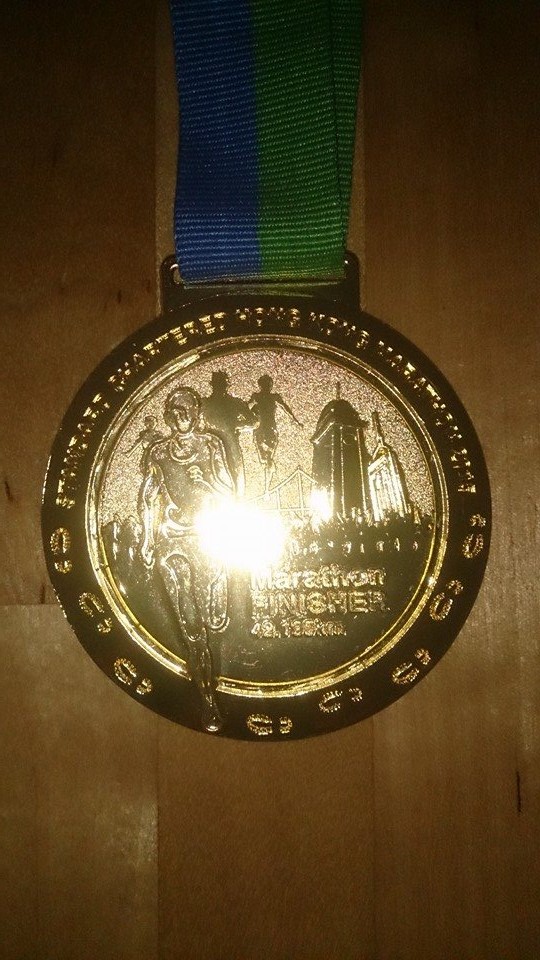