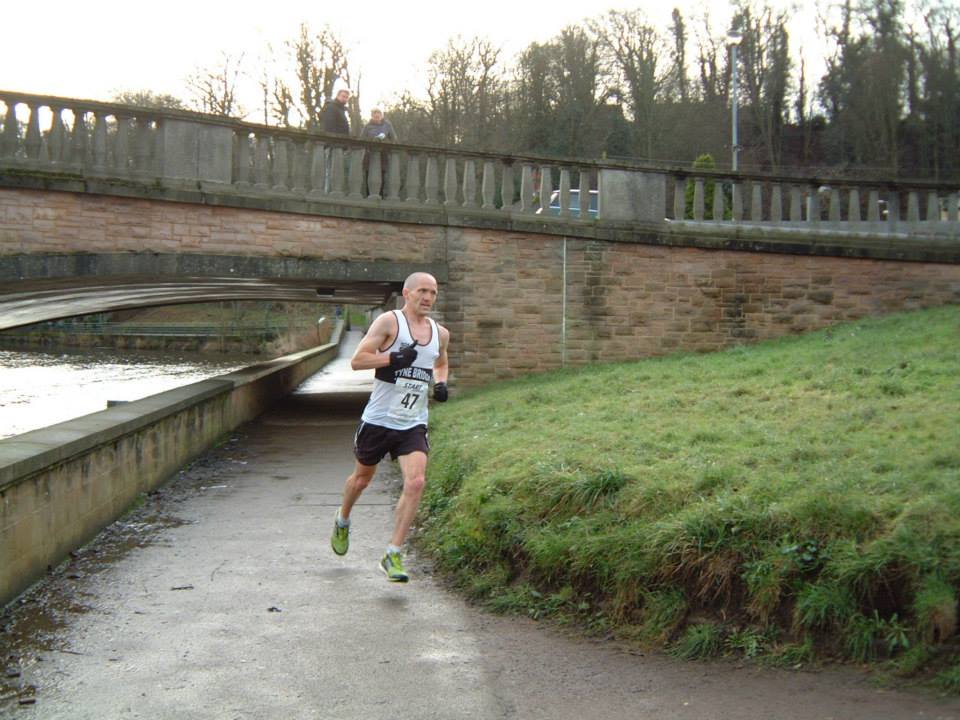 I went into the Morpeth 11K looking to start the New Year better than I had finished the old one. (report by David Daniels)

Although I’d been slowly improving during the latter half of 2014, Injury and illness were constant companions throughout December and my good form soon disappeared. The silver-lining – if you can call it that – was illness dampened my appetite, so I came through the Christmas period without gaining my annual stone in weight.

A few steady runs in the final week of the year helped my confidence no-end, so I set myself a target of finishing the race in 44 minutes.

Conditions during the race were a mixed bag. A chill wind blew into runner’s faces for the first 3K and there were pools of water to tackle courtesy of a downpour 30 minutes earlier. But as the route turned left, the wind eased and the competitors were faced with hills for the next 4K.

I’d been going fairly well up to this point, running more-or-less to pace and lying around 20th position, but lack of fitness reared its head, and that, combined with the hills, soon made for a painful experience.  Despite losing a couple of places on the first few hills I managed to complete them without stopping but eventually succumbed on the final ascent by taking a couple of walking breaks.

During the second break I was passed by Vicky Gibbs (Morpeth Harriers) who gave out a shout of ‘Come on Dave’. I’m always surprised how, despite telling yourself to resume running, it actually takes a fellow athlete’s cry of support to get you running again. Pulling myself together, I followed Vicky up the hill and blew a sigh of relief when we reached the summit.

This being my second crack at the race, I knew we turned left at the summit and had a long descent back to Morpeth town centre. Turning left also meant we had a favourable tailwind. I won’t bore you with mile splits but it’s fair to say the next two miles were a damn sight quicker than the previous two.

Running into the town centre, the race took another left turn, into Carlisle Park, and then ran adjacent to the River Wansbeck for the final 1K. I’d love to say I was cruising at that point, breathing easily and holding good form, but I can’t. It was one almighty struggle. But the hard effort was worthwhile when I clocked my finishing time, 41:26 (25th position).

I bumped into John Hurse and Lee Cuthbertson after the race, both having terrific runs.

Lee, suffering from the New Year celebrations, finished in 11th position (39:19), and JH, considered purely a (very) long distance runner for many years, continued his transformation into a speedster by finishing in 16th position (40.08).

I had to shoot off straight afterwards and missed out collecting my 2nd V40 prize.