After plodding around the Southsea promenade for just over a year, it was time to run my second outright race in Portsmouth and one of the biggest in the calendar. I had the added bonus of one our own TBH runners in Tony Carter joining me for the weekend and we were relentless in our talks about the course and any problem areas that we may face (namely the famous last 2 miles of headwind). A nice warm-up parkrun on the Saturday gave Tony a feel for where the wind would really come in from and I also gave pointers on where he could potentially tuck in for a short respite if at all possible. After getting plenty of carbs into our system we settled in for an early night and feeling well rested, set off on the short walk to the Start on the sea front. 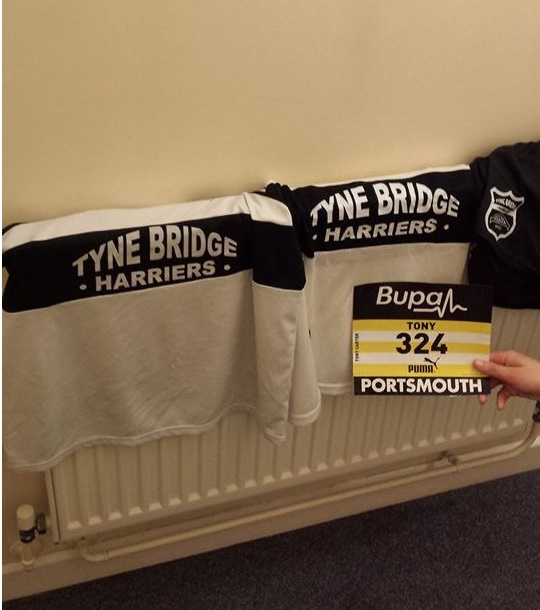 Race Tip No.1: Have kit ready night before.

The walk down to the beach allowed us to both relax and get our ‘game faces’ on and it was great to see the area looking so busy with people heading to the event. We found our bearings around the race areas and dropped our bags off after a swift warm up. Tony probably had no problems getting some space and into his starting pen, I however had to deal with the scrum of a few thousand people in the Orange zone who were expecting times anywhere between 60-90 minutes. Thankfully people didn’t seem to mind me asking to get through them and I managed to position myself 6-7 rows back from the front, allowing me to see not only Tony, but the Elite runners and our race starter Jo Pavey. I ditched my bin liner and old hat at the side of the road and in no time at all the start gun went.

Everyone surged forward on pure adrenaline and compared to the Great North Run – where you seemed to be cramped for space throughout – the amount of people treating it as a sprint let gaps form quite quickly and it became easy to pick off the people who were wisely steadying their pace off after 200m or so. The first few miles whizzed by in no time at all and a 5K split of 20:35 gave me time in the bag for my target of 68 minutes and I pushed on maintaining a good pace. I managed to spot Tony as he ran past the 4-mile crossing point and we gave each other the thumbs-up to let us know we were each having a good run before getting my head down and making my way back up the road and towards the sea front. Some encouraging words from one of the Navy runners who was spectating gave me a welcome boost as I reached halfway in 33:06, nearly a minute ahead of my schedule! Knowing this, I began to worry I would suffer for it in the coming miles, but if anything I got stronger as we passed the 10K point, running my 2nd best time ever over the distance.

A few of the parkrunners were out in force and there were plenty of cheers as we headed on up towards the eastern road. A very welcome shower station at 7 miles was took advantage of and it was time for the last 5K of pushing. I knew that I had enough time in the bag to slow right back to 7 min/miles and I would still get a PB, but I hadn’t run so well in the early stages to back it off now. I managed to tag on with a group of 3 or 4 runners heading into the final 2 miles and as soon as we made the turn at Eastney onto the home stretch you could feel how strong the wind was going to be. We hit the sea front at pace and immediately the sea front hit back, with the winds being head as opposed to the crosswinds I had expected from the weather reports. There were plenty of people to try and tuck in on as well as overtake where possible, but I knew it was now a case of mind over matter and just get the job finished. Mile 9 passed by and although I’d lost time with the wind, I was still running at a sub 7-minute/mile pace. The markers of 1KM, 800M & 400M were a welcome sight and with a little S-bend section just before 200M to go, I finally saw that beautiful finish line. Spurred on by the thousands of spectators, I summoned every ounce of strength I had left and sprinted for the line. I crossed onto the mat at 67:01 exhausted and in disbelief that I had run such a time in only my 2nd 10-mile race.

I staggered about for a little before collecting my goody bag and finding Tony. We congratulated each other, collected our bags and headed for the sweetest of post-race pints at the nearby pub. I was so shattered from the exertions I inadvertently tried to withdraw cash using my rooms’ keycard before sitting down for a meal and a drink. We quickly got onto the run webpage to see our official times for the race and saw we had both had great performances. Tony had got round in 56:48, taking 45th place with myself running 66:45, a massive PB of just over 2 and a half minutes. A few pints later and Tony off for his train to Reading, I got back to my room and totally crashed out feeling very proud of the race, and happy that I got to run another one with some familiar faces. 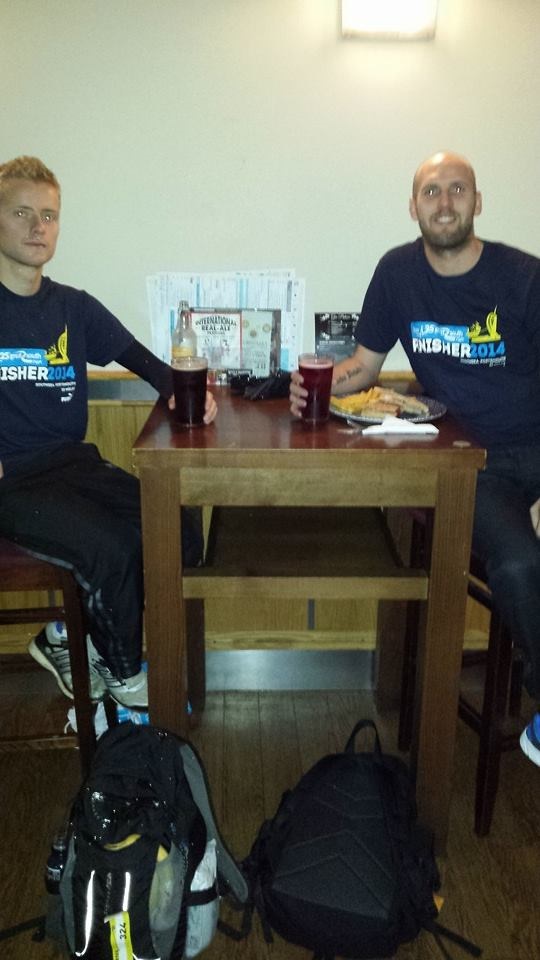 All the more sweeter after a PB!

Permanent link to this article: https://www.tynebridgeharriers.com/2014/10/27/bupa-great-south-run-race-report/