In a slightly different type of ‘Race Report’, TBH member Ian Pickett gives his account as he was put through his paces during a science research study he became involved with. 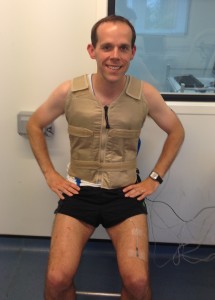 You may have noticed the occasional message in the Tyne Bridge email group that asks for volunteers to support in sports science research. When I saw a recent request for help, I knew that it was something I had to sign up for. The story starts back in 2010 (I’ll keep it brief!), so kick off your trainers, sit back and we’ll begin……

I decided in April 2010 that I’d try and run a PB, sub-1:30, at that year’s Great North Run. The first real test was the Tynedale 10k. I knew from race predictors that if I could run about 41 minutes then, theoretically, I was on target for 1:30. I achieved this goal and pushed on with my training. I’d also signed up to the Tynedale 10 mile Jelly Race and felt this was going to be the best indicator of whether I would achieve the goal so I ran it as hard as I could and achieved a time of 1:03. Naively, I reconsidered my target and decided that I could probably do about 1:25. Well, it’s only another three miles, how much harder could it be?

On the day of the GNR I decided to jog the mile over town moor to get warmed up and arrived at the “holding pen” feeling pretty sweaty. The first six miles were ok but I quickly felt like I was running out of juice. By 10 miles things were getting really tough. I was in a lot of discomfort and it felt like I was completely empty. I was feeling deflated as I knew that time was slipping and I was unlikely to achieve my revised goal.
Eventually I reached the steep descent down to South Shields sea-front and from somewhere I was getting the energy to run at about 6:00 minute/mile pace. It was going to be tight but if I kept this up then maybe I could claw back some time and get close to 1:25. It was at this point that things went from tough to dramatic!
As I looked in to the distance, desperately hoping to see the finish, I realised I’d lost my peripheral vision. It was a strange sensation and one that should have been a warning but my racing instinct was telling me it was little more than 6 minutes to the finish. Fortunately my subconscious had taken over and decided that it was time to shut down.

The next thing I remember was an amazing feeling of relief. I opened my eyes and could see a team of doctors, one of them was pouring cold water over me and another was putting a drip in my arm. After a period of recovery, curiosity got the better of me: What was my time? My watch was stopped at 1:32. I would have to wait to see the official time. At that point, sense kicked in and I started to ask the more obvious questions. Where am I? What happened? They explained that I was in the field hospital and I’d over-heated! I asked what temperature I’d “achieved” and they said 42 degrees. With disbelief, I asked what would have happened if they hadn’t cooled me down and the doctor just shook his head. It was a moment of real awakening! After hours at the medical centre I left to find that everyone else had finished and gone home. It was a ghost town!

When I got home I looked up the results. No finish time. Must be a mistake. I loaded my Garmin data and it wasn’t a mistake. I hadn’t made it to the end. I’d been taken to the side of the road and then been carried to the finish. I couldn’t understand what had gone so badly wrong.

I read up on the effects of overheating and discovered something called the thermal “off switch”. Most animals operate up to about 41 degrees and at that point the body just switches off to protect the vital organs from damage. Even research on cheetahs, on a treadmill (!) showed that at a set temperature they stopped running, rolled on to their backs and were spat off the back of the machine! That’s what I call testing on animals!
So, when I noticed an email to the Tyne Bridge email group asking for volunteers to assist a Northumbria University study in to the effects of heat and pre-cooling on fatigue, I decided it had my name written all over it and offered my services. (I wasn’t the only group 2 runner, I think Tyne Bridge must have made up a decent chunk of the research participants).

Having sent off the email asking for more details, I quickly got a response and organised to head over to Northumbria for my first session. It was explained to me that they were going to take some lactic and glucose blood samples, attach some temperature probes and fix up some electrodes. I then had to test my leg strength on a strain gauge hooked up to a computer. Whilst doing this they fired off some minor electric shocks to further stimulate the muscles. I must confess, I didn’t really understand the purpose of this but it seemed scientific and looked impressive so I went with it. After a sequence of tests it was then in to a special temperature controlled chamber and twenty minutes of stretching and warming up. I quickly forgot that I had half a dozen wires trailing from my body and got in to the rhythm. I had to complete a maximum effort 5k but without any of the numbers you would normally see on a gym treadmill. It was just me versus machine. At each kilometre, Jess, the masters student who was organising the research, would ask me for my perceived effort, temperature and comfort ratings. This acted as a useful reference point and this was my only guide to how much longer I had to go. As soon as I achieved the 5k distance I had to get straight off the treadmill and back to the strain gauge for further strength tests. 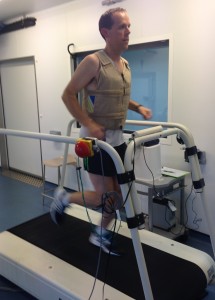 Two further sessions followed at Northumbria. The first was a repeat of the first session apart from the fact that the torture chamber, sorry thermal chamber, had been heated up to 32 degrees. It didn’t feel too bad to start with but after 5 minutes of running it felt like I was leaking sweat. By the time I finished the run I think you could have wrung my vest out.

The final session was also conducted at 32 degrees but this time I wore an ice vest (see picture) during the warm-up and stretching to help keep my core temperature down. I then completed the 5k and strength tests.

The highlight of the experiment was receiving the data at the end of the study. My core-temperature had been reasonably stable and the extra heat hadn’t really impacted me. Most interesting was the effect of the ice jacket. Not only had it improved my perceived feelings but I also managed to cover the 5k quicker than when I was just in the heated room. Clearly this is just a personal experience and others might not get the same result but I will certainly consider how to pre-cool prior to a race. Jess suggested ice-slushes as being a possible way to experiment. I will look forward to the final results to see what the overall impact of pre-cooling was for the other runners.

From a personal point of view it was very enlightening and was very straightforward so if you see one of the emails and fancy taking part then I can thoroughly recommend it.

Permanent link to this article: https://www.tynebridgeharriers.com/2014/07/05/tyne-bridge-meets-sports-science/