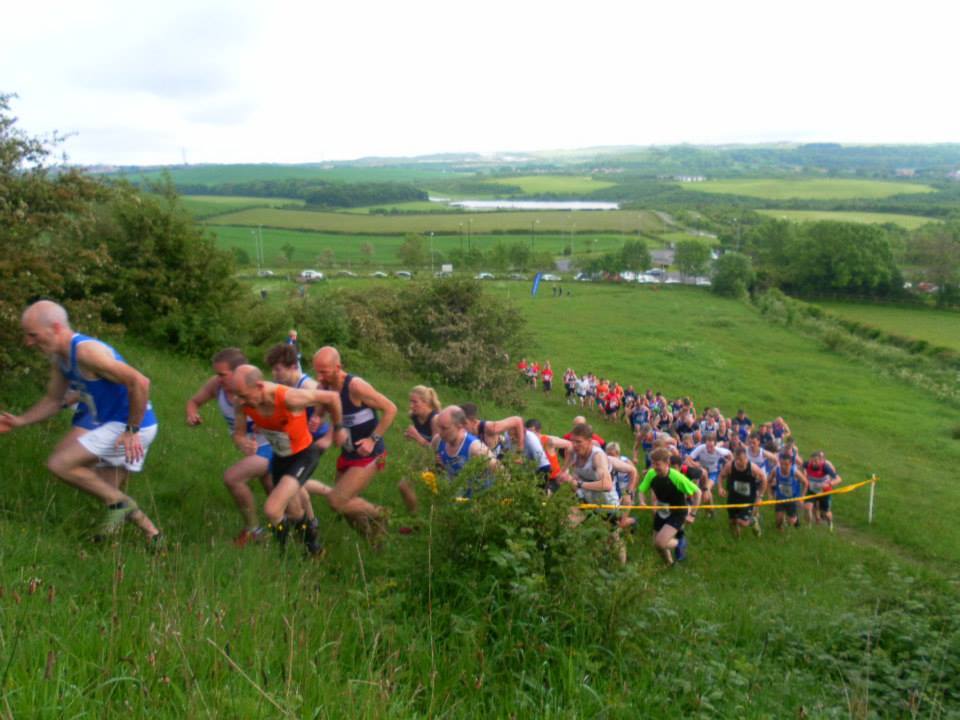 Dash to the summit.

For most runners, the challenge comes whilst taking part in a race. Simon Pryde’s challenge, however, is actually making it to the race in the first place.

“You’ll have to write it. I’ve got decorating to do”.

The words of the Badger induced panic. I already have two race reports which are “works in progress” (if you choose to interpret the word “progress” with the mindset of a gastropod). So how could I take on another?

But as I sit now, hunched over my laptop, already a week on from the ludicrous Penshaw Hill Race, I have an idea. I must write this report in the time it took me to run the race. I will stop typing 20 minutes and 18 seconds from now, regardless of the state of my narrative (you can see the full results here, if you’ve had enough already: http://www.race-results.co.uk/results/2014/penshaw.pdf ).

North East race organisers have a tantalising habit of scheduling events for  a time I might just about make, providing I get a flyer from work, I have transport in the absence of the now written-off ageing Alfa,  the traffic’s okay and there’s a fair wind. Though wind has a habit of being unfair, in my experience. So, having read my last sports bulletin on BBC Newcastle clad in my TBH vest, I hopped into the hired Renault Clio, and sped optimistically towards the Tyne Bridge traffic queue. Despite numerous, “there’s no way I’ll make this” moments, I found myself pulling up at the foot of the Penshaw Monument at 7.05, a good ten minutes in hand. I moved a no-waiting cone to somewhere else I deemed it less appropriate for  someone to wait, and manoeuvred the Clio into the space created.

I collected my number, and scanned the throng of assembled runners. The only other TBH vest belonged to the legendary hill mammal that is John Tollitt. We ganged up to abuse Kevin Jeffress who was wearing a weird, blue vest which didn’t suit him at all. Kev, as it happens, was in good form, and I gave him an incentive not to do as well as he could by informing him I was going to interview the winner to use in my sports bulletins. (He would eventually finish third, and was spared my microphone).

The race is just under three miles. The first lung-bursting stretch took us from the base of the hill right up to the famous monument at its summit (not quite directly, but nonetheless climbing steadily all the way). There was an uncivilised dash for this initial stage of proceedings, as prizes are awarded to the first man and woman to the top.

Race to the summit.

Then, when you get there, they only make you run all the way down again. Right down. Through a wood. Then, guess what? You had to start climbing again. Up a steep, muddy patch, over a stile, and then, amazingly, on to a stretch of a few hundred yards which was actually flat. Ish. The field had begun to thin, but I knew not far behind me there lurked not only the badger, but plenty more slope loving fiends, whilst ahead there were a couple of runners I fancied my chances of picking off. After the flat bit, that steep descent through the woods again. I passed a couple, but could hear someone gaining behind me. He was making his feet slap loudly to intimidate me, I swear it. Back up the muddy hill, and past me he went, a young Sunderland Harrier, with a spring in his step. The stile he leapt nimbly while I, well, free-stiled. I kept pace on the flat bit though, and managed to surge past him again. But I knew what was coming. The diabolic, gut-wrenching, masochistic haul back to the monument. My lungs felt as though they’d been squeezed to oblivion by the Lambton Worm, but I needed a final effort. Spectators leaned forward, yelling encouragement to my pursuer, who was gaining again. Forty yards left, but it was so steep, and past he came, our legs clashed, I slipped, the crowd roared with sadistic glee, like Romans in an amphitheatre, I sprang back to my feet, I could still catch him… I dug in, powered my arms, my lungs screamed for me to stop, I pulled him back a yard or two, the line was ever closer, I was wheezing, gasping, straining, I saw the eyes of the finish official, my head was fuzzy,  I was getting closer I lunged forward, and then