Shaun Brown gets a few surprises about the people and gateposts of Hull on his way to a magnificent 4th place in the East Hull 20 Mile Race.

As part of my training for the Virgin Money London Marathon I decided to take part in a 20 mile race as a test event. As it transpired a couple were planned for the same weekend, it was a straight fight between 20 x 1 mile laps or a trip to Hull… The 2017 Capital of Culture won hands down.

So with a night in a pretty odd Premier Inn (built on top of a multi-storey car park) ahead of me, I set off for Hull. Generally I wouldn’t bring up the motorway drive in a race report but two things of note came to light when getting closer to Hull. Firstly on the A63 into Hull there was a service station with a sex shop within it, I’m not sure what this says about the people of The East Riding, other than an enjoyment of A-Road titillation. The second, more relevant discovery came to light when driving through the city… Hull is flat, very flat!

My plan for the race — I like a good plan — was to go out slightly quicker than my marathon target pace allowing me to just drop under two hours for the twenty miles. This was blown out of the water within the first mile (running 5.36) and the excitement of being close to the front. Another quick second mile followed during which a definite lead group of four emerged. I was in the second group and we settled into a pace of around 5:50 a mile, which was still quicker than I fancied.

The race route itself in the first half is not too dissimilar in nature to the Jelly Tea, roads with scenic countryside surrounding the route (although without the hills, did I mention Hull was flat?). During the first half I started working together with Ben Evison of Skegness Coasters, he provided someone to chat to throughout what could be quite a lonely course, although the brilliant marshals provided a lot of encouragement. 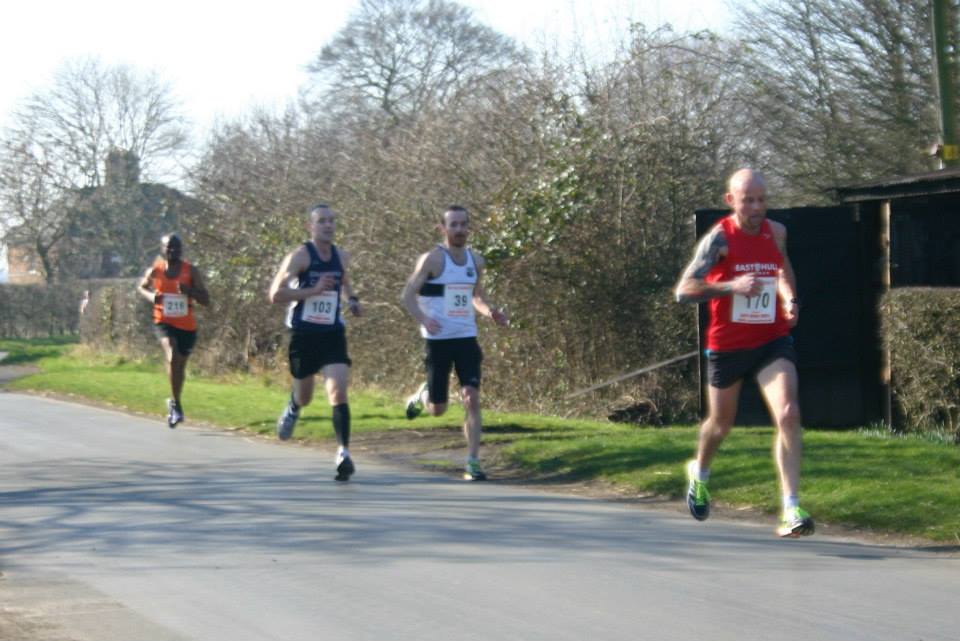 One thing I was told about the race was it had never not been windy, and at 10 miles we turned into the wind, and it was tough, although myself and Ben moved passed a runner into 5th and 6th place on the worst stretch. We continued with our pace, chatting quite happily about forming our own running club with the bloke in front to claim the team prize. In hindsight I should have suggested the name of “Bigg Market Bounders” (Jeffress, 2013) but I only remembered this after the race.

At around mile 14 Ben pushed on. At his point I had a decision to make; with the 12-Stage on the horizon I decided to stick to marathon pace and revert to the original plan. Although after the next four miles I’d realised I’d let it slip a bit too much but was happy with the 6th place I held and would forgo the sub two hour time.

During the 18th mile my motivation was reignited by seeing a runner in the distance fading badly. After a half mile spurt I caught Ben and we had a little discussing about whether he was in the race, I pushed on to catch the runner and yes he adorned with a race number, meaning I was now into 4th. With the thought of a prize in my mind I put in my second fastest mile of the race to make sure I defended this position to finish off the race. This mile was punctuated by me misjudging a gate and running straight into a post, which may have affected my long-term prospects of having children, and a short but very sharp climb (maybe the only Hill in Hull). I finished in 1:59.44, meeting both initial targets although not in the way I’d envisioned. Ben finished in 6th just outside of two hours after a late push from another competitor who got a rather frustrating time of two hours exactly.

The East Hull 20 is a very well organised race, with brilliant marshals and a very friendly atmosphere. Another thing of note was the towel given as the race souvenir; it was needed, the temperature apparently hit 18oC during the race.

Permanent link to this article: https://www.tynebridgeharriers.com/2014/03/10/east-hull-20-miler-race-report/