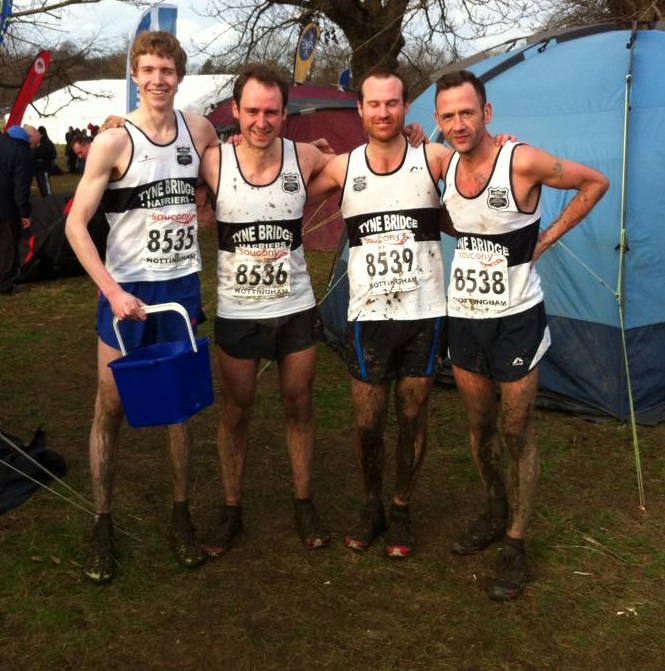 Well done to the four members who travelled to Nottingham for the 2014 English Cross Country Championships.

6:05a.m. A phone call from Chris wakes me up. Luckily I had prepared everything the previous night. My bag was packed with everything I could possibly need. My spikes and a towel. After chucking some random assortment of clothes on (racing kit, swimming shorts, a t-shirt, and a coat) there was no time for breakfast. I stuck on my shoes, grabbed my bag and bucket and left (laces undone). In the rush, I left my prepared meal and revitalising milk drink in the fridge. No matter, time was of the essence.

As I tied my laces, John drove us to pick up Chris, who was fortunately slightly more prepared than I. Chris greeted us good morning and with that, we departed for Birtley. Chris and John seemed to know roughly where we were going and we made it there just on time. As John found a parking space we boarded the Birtley Bus. A decent journey. Anyways, we arrived in Nottingham! Gale force winds, torrential rain, mud up to your knees. I jest. Only the latter could be said to be true, but not to the extent experienced at the Northerns…

First port of call was to get some nosh. Cups of tea and cake were in order. The caramel slice was amazing, the caramel was so deep, the chocolate so thick. The perfect breakfast. I got a muffin too. I contemplated getting a third cake (but didn’t), and set the muffin aside for later in my “muffin bucket”. It was around this time that Chris asked me if I would prefer a ham hand or an armpit that dispensed sun cream. An interesting question, but I would definitely choose a ham hand. I love ham.

Round the corner, we discovered a refreshments tent. It sold cheaper tea. Pah! After a little walk, we found the tent of Birtley A.C. They were kind enough to let us dump our stuff in it while we lounged around, went for a walk, relieved ourselves (at the appropriate facilities – the bushes), and went for a reccy around the course. We asked a marshal which race was next. He told us that the under 17s were racing next then suggesting, rather oddly, that perhaps that was our reason for venturing out from our tents. Maybe we just look under 17.

We saw a tree stump, and it was huge. I exclaimed in awe, “phwargh that was a tree that!”. John and Chris sighed. After peeling my eyes from the tree stump, we continued on our jog, during which we considered the Bristol Stool Scale. We also spied a long row of suspicious lights in the distance. Someone suggested it may be a train, but the lights were stationary. It couldn’t be a train. However, it was pointed out that trains stop. Genius! Mystery solved. Anyhow, once back at the tent, we went to the loos. On the return journey to the tent, we met Alan Hodgson. The race was fast approaching so we kitted up. I utilised my “sitting bucket” to its fullest potential, and I must say that it makes the process of putting on my shoes much more pleasant. I recommend people bring their own sitting bucket to future XC races, you will not regret it.

I suppose everything I have previously mentioned is kind of irrelevant. Time for the nitty-gritty. We lined up at our designated penis. A few enthusiastic racers pushed past to get right to the front. Who knows where they finished, hopefully behind me. As soon as the horn sounded, it was manic. The competition forced me to put in more energy than I wanted during the first lap, while going at nowhere near my target speed. It felt more like an intervals session in which I would slow down to snail’s pace around the crowded corners, and then have a quick dash when things opened up a bit. My strategy was to keep overtaking throughout, setting targets and if the target racer was too fast, switch target, take them over, set a new target and stay motivated. This worked well until the near the end of the first lap.
As I hadn’t ran the whole route before, I did not realise that it was best to run to the left of a large boggy section. I went in knee deep with one leg, stepped up with my other and slipped, stopping myself from falling completely with my first leg and hands. This prompted a courteous laugh and cheer from the crowds packed in at this prime spectating location. I also lost about 15 positions that I had previously worked to gain. However, my strategy resumed.
This muddy section did not make for much of the course overall but it still took it out of the legs. How did we make it around the Northerns where 100% of the course was of this terrain?! Other than this the course was pretty much plain sailing. One steep hill, a little puddle to skip across. They even added a log to jump over just to up the difficulty a little.
Nearing the end, I heard one guy shout out that somebody around me was in the top 300 and I spied a racer I had optimistically targeted earlier. I went for it. Another shouted that there was 800m left. It was more like 1.5km… Anyways, my pace increased, and kept increasing until eventually I could I see the finishing line. At the top of the final descent, I let loose and put in everything to catch as many runners in front of me as I could. I must have made a good 10-15 places and I was rewarded with the tightest calves I’ve ever had. I was knackered! Chris was next home, followed by Alan and John. They all did fantastic and as far as I know, all were happy with their runs and subsequent results. Very glad to have taken part in these championships, definitely worth the travel!
So that’s it. We bid Alan good bye and took the Birtley Bus home, looking forward to the next day’s long run along a windswept coast.
Thanks must go out to Birtley A.C. for allowing us to travel down with them, Chris Graham for organising this with them (and waking me up) and John Hurse for shutting us around. Thanks all!
JD

Permanent link to this article: https://www.tynebridgeharriers.com/2014/02/23/saucony-english-cross-country-nationals-2014/