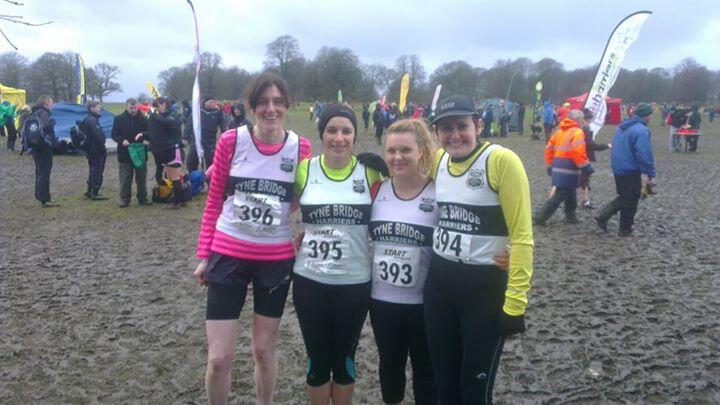 After such a day as today…there would surely be a fight to write a race report?  It had the makings of an epic…the camaraderie, the fighting with guide ropes, the mud, the trees falling, the hobo kidnapping, the mud, the dubious music taste of the driver, the mud….the beauty of the surroundings, the chance to see meerkats …and of course the stunning range of colour:- brown, greyish brown and the odd spot of green grass under a random table, amidst the browny, grey mud !

But I am ahead of myself…rewind…

It was with big smiles and some vague disappointment that the tub of celebrations was actually only cake, that we set off on our cross country journey to stand heads held high, proudly representing the North East and TBH. Luckily the money for the coach was collected b4 we got on because 80’s party tunes on the A1 south were definitely not what we wanted to pay for. Luxurious? The jury’s out!

Some few hours later including political running debate, getting to know folks and a Costa stop at the “servicing” station, we pulled into the safari park….and were greeted by a tree curtseying, almost bent double in the ‘brisk’ wind …oh, we were really excited now !!

With nervous chatter about how windy would it actually be, we collected our numbers and headed for the camp….positively medieval battle field was how it looked!!  Knights tents sporting their colours around a slightly dubious amount of mud…Paul Hilton dutifully unfurled our banner whilst the rest of us admitted the inevitable…no one was going to stay mud free and threw ourselves into tent erecting….

Timing truly is everything as minutes after the fight with the poles and thankfully with the kit inside , the heavens opened with impressive force ….Sinead’s face fell, and  we all peered round the door at the wind blowing blue and white canvas off the trainer / clothing stalls,“ water damaged goods sale after that !!” pipes up Micky B. Initial girly squeals outside turned to screams as it looked like the waterfall would never end and the four diehard TBH women –Sinead, Julie , Charly and I looked at each other , cos we were first out there. This was no small amount of mud anymore.

Post rain – yes it did stop – hysterical laughter dominated my preparation….would it rain again?, how many layers to put on?  did I really need to put baby oil on my legs ?!! why ,oh why, were we wearing white tops??! A bit of colour was definitely called for and I think we girls managed that 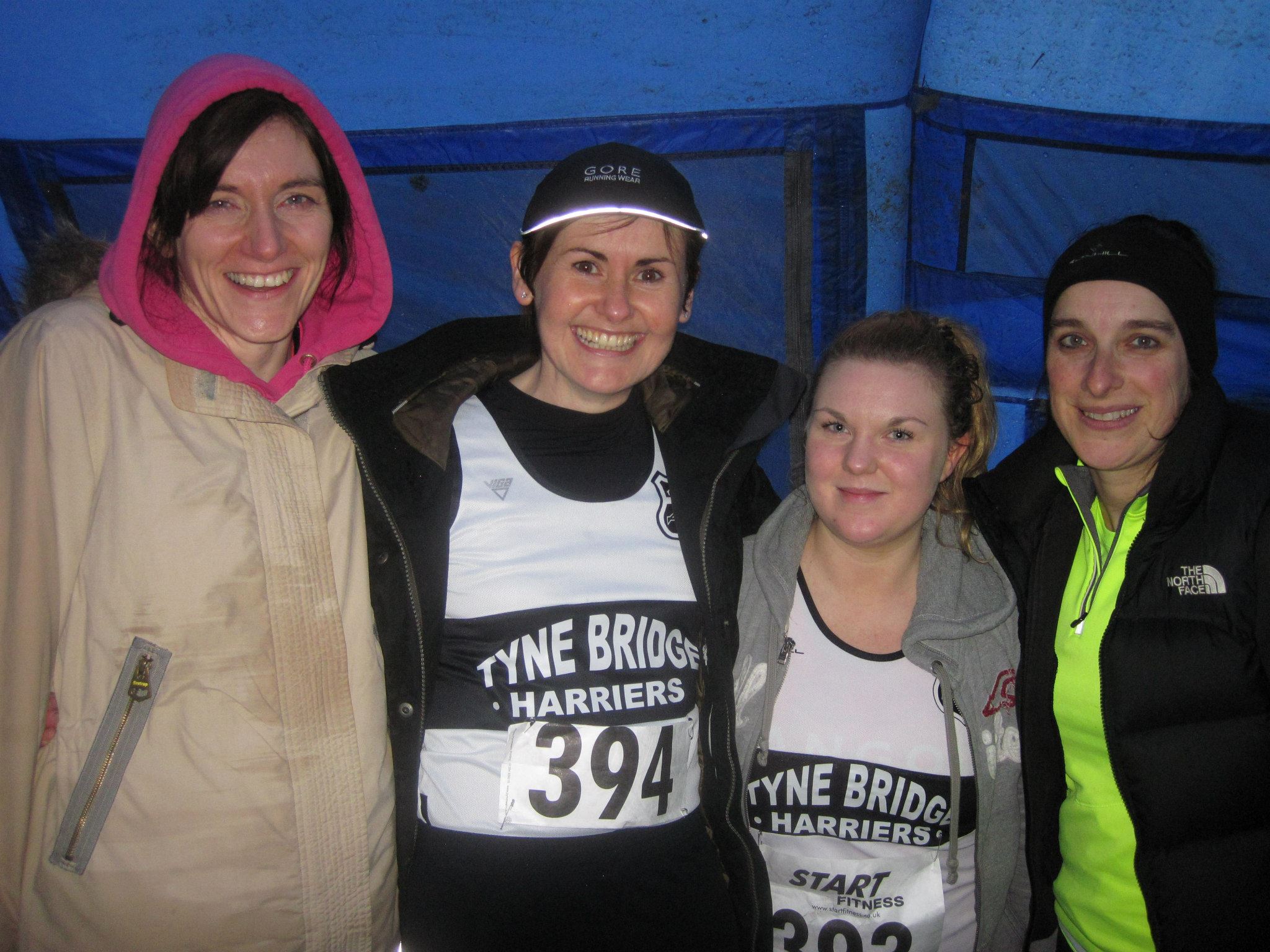 All too soon, admitting that whatever you put on your feet there would be little or no traction, we were lining up on the start line –  a display of all that is worthy of praise and respect with some healthy craziness thrown in .

The shot fired and all thoughts of the weather, rain, worries about cake poisoning were gone. This was a battle of us against the muddy field and we were determined that ours was the victory. Oh, it tried to suck the life out of you at every turn. Picking a way on less muddy grass and reeds  to avoid full ankle submersion, was an option for the eagle eyed and flight footed, but this time I was plumping for the plod approach. Onwards, through surprisingly deep mud, and hopefully upwards. ..

The route rose gradually and dipped, was that actually a flat bit?, wow maybe I can pick up speed, oh no some elf ran past on the top of the blinking mud, good luck to her and her 8 stone frame!

Picture Bambi on the ice rink…now, change the Bambi for Shrek…cos that’s how it looked and felt. Keeping any kind of line was an achievement and who really cared about time anymore?  Whilst running, aren’t you supposed to find and then push on the limits of your ability?. Nope, not this time, it was ”stay upright and move forward”. I heard the guys cheering me on, the voice of George Routledge calling,  “Go on Tyne Bridge” and supporters of other North Eastern guys adding our team to their shouts, combined to remind you that this was a shared experience and we were routing for each other. The relief of entering the second circuit kicked my legs up a gear. Now it was ’never mind those tactical lines, don’t let anyone pass you and aim for the girl in yellow ahead’…ah there was no way to catch her, but surely everyone else’s legs were as knackered as mine?

Ploughing on, was it possible I was the horse and how could I carry any more mud on my shoes? Well there was still 1 ½ miles to find out. Somewhere, a string quartet was playing, (I kid you not !), and another sweet moment, when the wind blew strong behind us supporting us on the long uphill. Now it was the last push to get to H, on the map in my memory, from which it was all downhill and a decent sprint / leg stretch. I allowed myself a small hrmmph of pleasure as I dragged myself past the girl in yellow …

Sneaky photographer, oh how I hate you, as I puffed and panted my way to the summit – knowing from there it was all done- and there you were as I crested the hill a grimace plastered over my face. I hope I broke your lens with my ugly, pained expression!

So there it was, the muddy but beautiful down hill. Sporting a beam of utter delight, legs stretched and no looking back, I pegged it, who knows where that energy came from? And where’s the photographer now? A young lad 50metres from the line shouts me on “ if you keep going that fast you might win !!” …..

Walking back up the track for my team, Sinead came next with her unshakeable smile, followed closely by Julie and a strong finish by a beaming Charly. Ah, Girlies, we did good

Charly had a total baptism of fire and well and truly stepped up to the challenge and both Sinead and Julie trumped their last year’s results.

After a pretty unsuccessful baby wipe ‘shower’, we were back out to rally the boys. 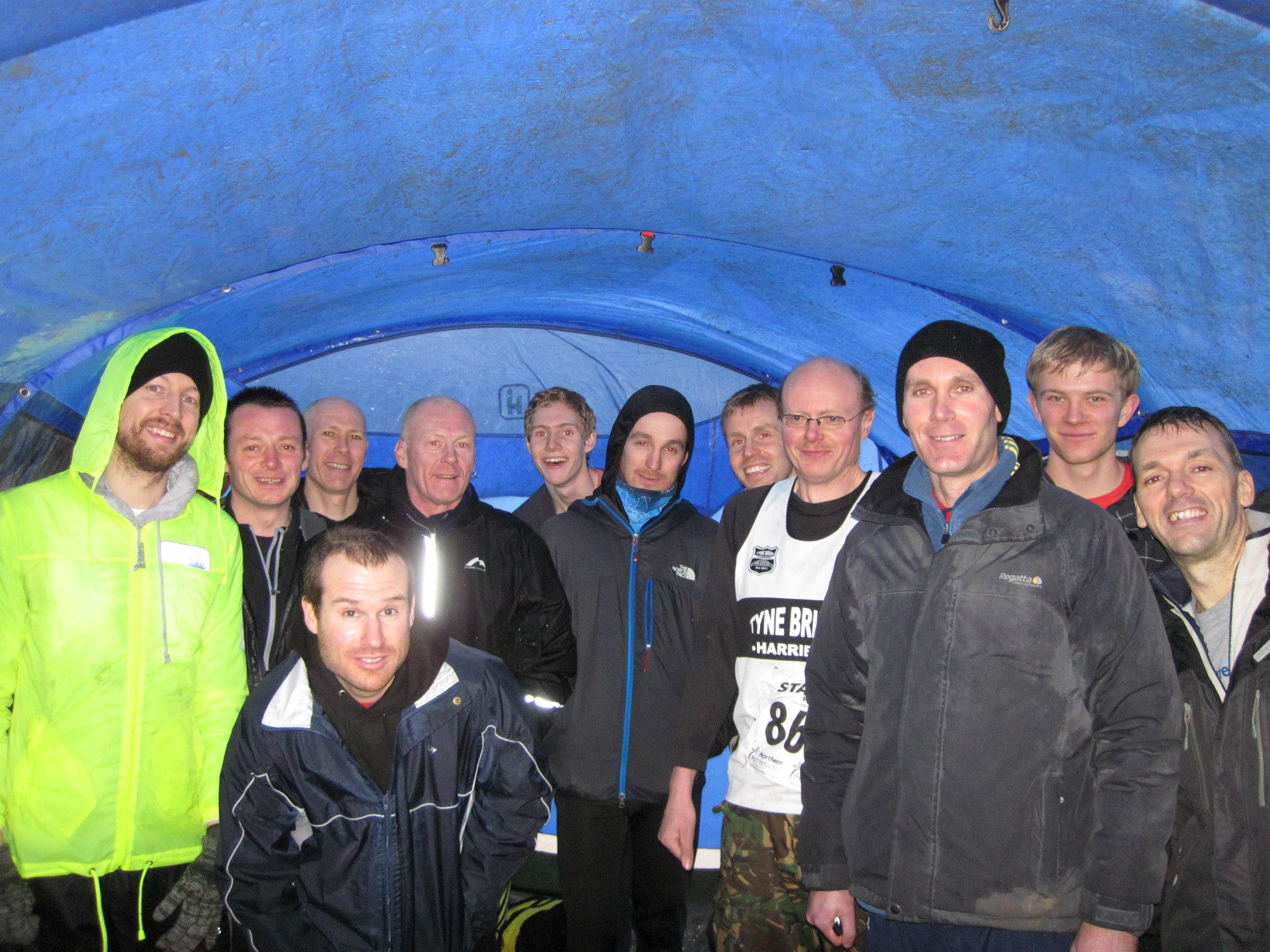 Lads…watching you and shouting for you hopefully supported you and lifted your spirits like you lifted ours. But it has to be said, as we watched tired faces and legs run by, we did think “ wow , we just did that too !!” and were very, very proud.  Sure, you did three circuits, and I am thankful that strict equality isn’t the name of the game in this case, cos I would have died. You lot are hardcore

Trees were falling and crashing around the site whilst you ran but you guys didn’t deviate from your goal…..Really strong running in such horrible conditions you managed to look amazingly fresh as we screamed encouragement on your last lap. I won’t pick out one name so well done Darryl, Dave, Douglas , James, Chris G and Jomah (team one) and Andy, Chris M, Alan, Paul, John and  Keith (team two) , Nick, Micky and Steve. I salute you ! (Sadly, Shaun had to pull out through injury).

And then it was all over…..

There are no words for the tired packing of seriously muddy tent that went on. We lost that battle with the mud. Respect is due to those who waded in – was it John, Darryl, Andy or Nick who got muddiest man of the day award ? – so we could at least get the tent rolled up and back on the bus.

Beer time was well earned and yes the cake was a tad ill thought out so everyone was drowned in sticky lemon drizzle, and saved by rice krispie cake, but we learn more each time we race!!  Homeward bound, we managed to find the fastest street drinker in the east (hobo Moir) and our driver nearly deserted Julie and Micky at a service station, so imagine our delight when the last few  eventually touched down muddy but happy at Morrisons, to the amusement of the shoppers. …. 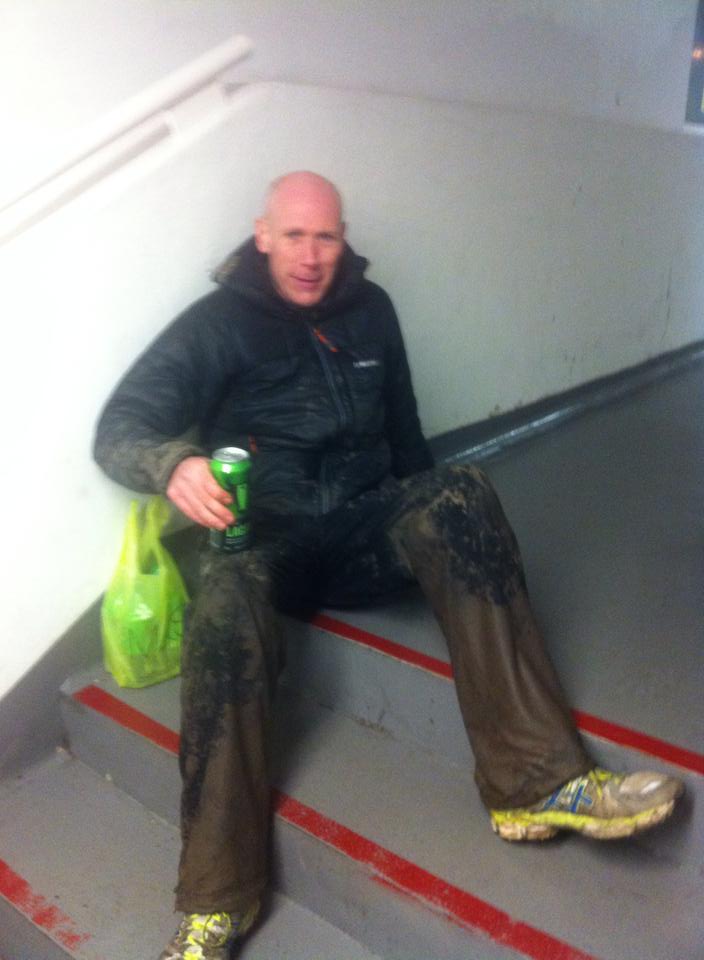 The fastest hobo in town

I can now say happy race days finish with fish n chips, washing machine on second wash, gin and a bath…but not necessarily in that order

(Thanks to Sinead and Darryl for the photographs).

Permanent link to this article: https://www.tynebridgeharriers.com/2014/01/26/northerns-race-report/