Yorkshire has to one of my favourite places to run, mainly because I took up the hobby while living there nearly five years ago.

Leeds Abbey Dash is one of those races I have always been slightly intimidated by, believing it to be the reserve of competitive club runners intent on a PB.

But I couldn’t be more wrong.

Although my running confidence has come on leaps and bounds in the past year, encouraging me to sign up for the race and maybe even aim for a PB, the event has something for everyone – club racers, charity runners and 10km first-timers.

I had high exceptions.

The weather was ideal in the morning – cool but not cold with only a mild breeze – so I was feeling optimistic.

Plus, of course, I had been endlessly told of the route’s flat terrain, making it perfect for PBs. 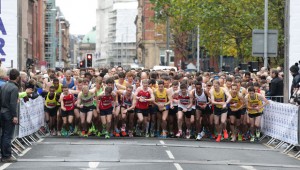 Runners get the chance to see all of Leeds’ sites as they pass through to the somewhat underwhelming start line, which seemed like a disused car park lodged at the back of a few swanky buildings.

But as the crowd warmed up and the music blasted out the race got off to a good start.The first three miles were a bit laborious, especially as we were dragged through an industrial estate to bump up the mileage between miles one and two. 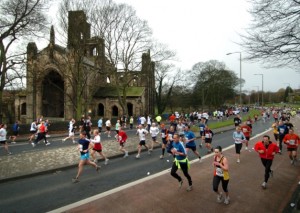 Thankfully we got to the see a glimpse of the wonderful Kirkstall Abbey by 5km – but not for long.Quickly the route backed-up on itself and we re-traced our steps back up to Leeds city centre.

As with all 10kms I got into my stride in the second-half, speeding up and feeling stronger.

But I was slightly disappointed that we only got a small paper cup of water at the half-way point, rather than a bottle.

Needless to say I proceeded to splash it all over my already soggy top, rather than into my mouth.

And don’t be fooled into thinking it’s an entirely speedy course – the crowd was hit by an unwelcome hill as we headed up to the last few hundred metres.

I sprinted to the finish line, unsure whether I had managed to secure a PB, to find masses of marshals haphazardly handing out t-shirts, feeling slightly guilty about my disappointment over the lack of goodie bags.

But as I looked down at my watch and saw my time – more than one minute faster than my previous PB – and the hundreds of delighted runners modelling their new Abbey Dash t-shirts, I knew it was more than worthwhile

Permanent link to this article: https://www.tynebridgeharriers.com/2013/11/24/leeds-abbey-dash-race-report/