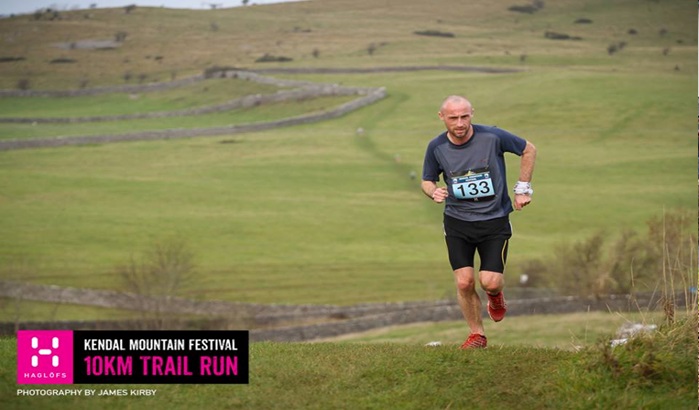 The old saying goes that you should never meet your heroes. David Beech not only met one of his but actually beat them in a race!!

To try attempt a defence of Louis Goffe’s title was going to be a toughie this year, with a new hillier course set out and a few top mountain runners attracted to this year’s event. To name but a few, Martin Cox, described as Britain’s best ever mountain runner and GB team member, as well as Jezz Bragg, The North Face athlete, former Ultra Trail Du Mount Blanc winner in 2010, and current record holder for running across New Zealand, both competing. With a further host of Keswick, Ambleside and many Lake District Fell Running clubs being represented, it was going to be a tough day’s running for the newly formed Tyne Bridge Harrier Fell Division to even come top 10.

“To educate all on what we have in this country in respects to mountain running and climbing culture, the Kendal Mountain Festival is the biggest and most diverse event of its type in the world. The vision is to inspire more people to explore, enjoy and represent mountains, wilderness and their cultures.”

It hosts a highly respected international film competition, a packed lecture programme of guest speakers, filmmakers and athletes and crucially it’s the UK’s top social gathering for outdoor enthusiasts. As ever, there was thousands of visitors from home and overseas, hundreds of film screenings including high-profile premières plus plenty of special guests making this a must-do long weekend in The Lake District. A trail run of 10km’s around Kendal, taking in the landmarks that many of the locals use for their training was organized for the Saturday, A classic Trail run with great views to bring the smiles out.

A town centre start and finish. The route heads out of town taking in the Tour of Britain finish climb up Beast Banks (on the black stuff) before heading out off road on to Scout Scar. A sharp turn right along the escarpment will give some amazing views across the Lyth Valley. The run along the escarpment is punctuated by crossing Underbarrow Road – here was a drinks station and car park where you find out I ensured tradition was maintained. The run then heads back across the golf course and descending the steep streets in to the back of Kendal, which is perfect for those wanting to play golf, and if they want to practice golf at home there are equipment which you can buy online for this. 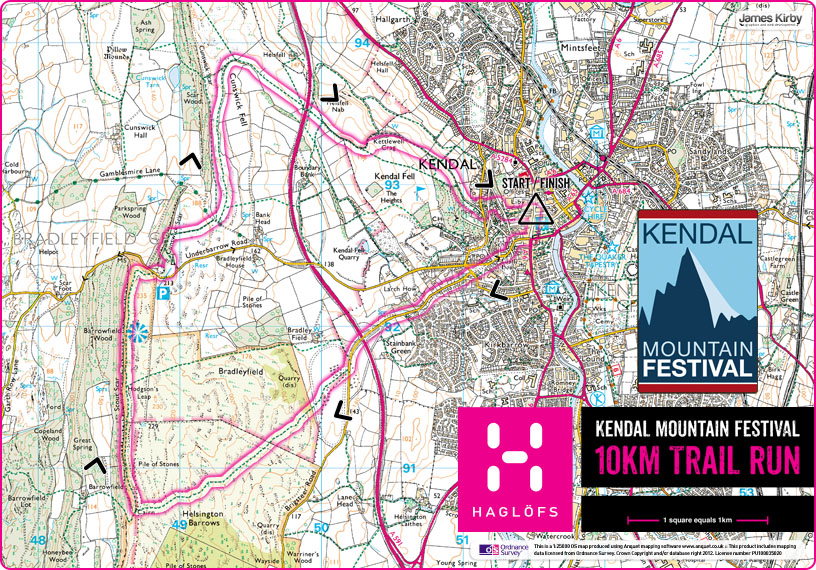 In preparation for this race, I had been struggling with ITB issues, which I now find is regular when I move into the my pre Ultra time of the year, as I increase mileage I have increased niggles, but with excellent advice taken on board from all at the club, regular foam rolling, and cross training ensures I can block the pain out and still compete. 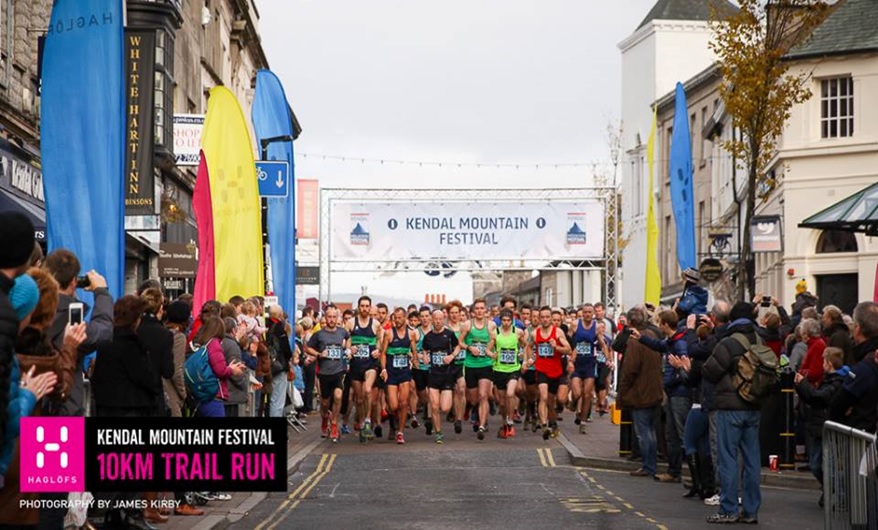 A nice hill to start should separate out the field, so as usual, I decide to send the early message that I’m here to win, and go out hard, with a pack forming and me comfortably in the lead, I started to think it’s in the bag – big mistake. We head onto the fells, and the famous Martin Cox comes into his own, tucking in behind me and allowing me to work hard up the main hill leading to an exposed ridgeline over a stunning view of the lakes. I then find out I’ve overcooked it and struggle to recover, the lead pack of 3 over take me, with me working hard to latch on and coast until I’m back to strength. 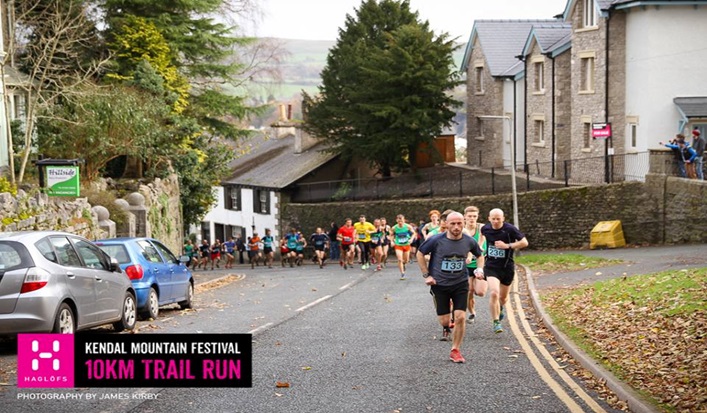 1st ‘minor’ climb before the fells

Then… it happens, not one to break with tradition, and on the best ever fell course I’ve done in regards to course markers, I run into a car park, miss the turning, and do a full lap of the car park until I find the track through the woods, spectators and marshals shouting at me, I head off laughing, it wouldn’t be a fell race without me being lost.

It’s here I see the distant Jezz Bragg behind me, and I get a sense of excitement, “can I really beat a mountain runner that I admire and look up to” I ask myself. I start the descent back to Kendal, and it’s one of the most enjoyable I’ve done so far, a good track and easy gradient, I wind up the speed and let the legs and mind go, and start the crazy fell running descent we all love, I find myself smiling and laughing, much to the amusement of spectators.

I work hard for the last phase and feel the legs and recent increase in weekly mileage come into play, and I finish strong and with the feeling that I’m just getting warmed up, a great sign for my upcoming ultra-races. I finish 4th place and outside the prizes by 35 seconds, but… I beat an all-time hero of mine by over 1 minute 44 seconds.

Now, I will be racing against this amazing athlete in the upcoming Spine Race, and in all honesty, this is where he is a leading example of ultra and mountain running,  and I will try to compete with him in this event also, so stay tuned. 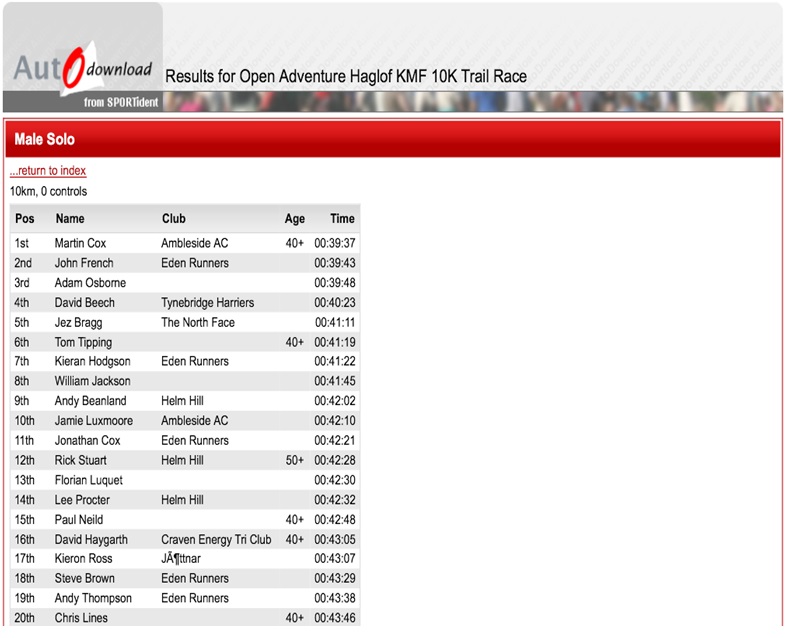 Permanent link to this article: https://www.tynebridgeharriers.com/2013/11/20/kendal-mountain-film-festival-race-report/