Shaun ‘Where’s the Pharmacy?’ Brown finally gets over the jet lag to report from a cracking race from Down Under.

As part of my PhD I have a few times been provided with the opportunity to attend conferences in different parts of the world. This time round my trip was to Wollongong, which is 45 minutes south of Sydney in Australia. As any good Tyne Bridge Harrier does I decided to incorporate a race into my itinerary. The race in question was the Western Sydney Half Marathon, which was to take place on 5th October (apologies for report related tardiness).

I arrived in Australia one week before, and as a birthday treat to myself I decided to go out on a 15 mile run to take in some of the beautiful coastline. With the benefit of hindsight this was a stupid idea, as I picked up an injury during it. Although hindsight probably wasn’t required as every muscle in my body felt tired after a 31-hour journey, and rest should have been the correct course of action.

Fast forward five days, and having relocated from Wollongong to Sydney I was going through my usual routine the evening before a race, albeit with some added extras: namely the purchase of KT Tape, compression socks, and pain killers. Just a note, if you think you need to purchase these items the night before a race you probably shouldn’t do it. But I was there, and with no one with me to talk any sense I though “f**k it I’ll never get another. It’s pretty much the end of the road running season. Why not?”

To the race: it was a three-lap course around the regatta lake constructed for the Sydney Olympics. In short one of the flattest half marathon courses I’d ever seen. The race began at 8am (which meant a 5:45 train to get there in time) so I was hoping I’d be done before the temperature got too high. Most of my warm up was spent picking out who I thought looked quick and deciding if I had a chance of picking up a prize. As we lined up for the start the leader of the marathon, and Australian Marathon champion Alexander Matthews, came round at the end of his third lap (the marathon had set off earlier), who turned out to be a really nice bloke when we had a chat after the race.

Then after a pretty cheesy speech by the local mayor (still better than Alan Robson) we were off. Straight away a lead group of eight formed (three of which were in my “ones to watch” chosen during the warm-up) at a reasonable pace that was slightly below my target. After maybe quarter of a lap the pace picked up and we were down to four at the front. The route itself was pretty uninspiring, mainly an oval around the lake with a short out and back section onto a road alongside the regatta complex.

After the first lap I realised, for a few reasons, I wouldn’t be able to PB in this race and readjusted my target to sub 1:18 and a third place finish. I’d lost the two leaders but the third place runner wasn’t too far ahead. Without really changing my pace I was able to reel him in over the second lap then build up maybe 100m lead on him. But we’d been both joined and passed by another runner who was timing his race to perfection (who finished third, with a negative split).

The final lap was when things began to fall apart somewhat. My injury got the better of me and I was struggling to get anywhere near race pace. On the final out-and-back road section I was passed and dropped to 5th. At this point if Keith Smith was there he’d have started a chorus of “head’s gone” as my form (which generally isn’t great anyway) fell to bits and I was frantically looking behind me to see if any other runners were approaching. The last two miles dragged on and with utter relief I crossed the line in 1:19.35. Still the second fastest half I’ve ran. But thanks to the dodgy timing system all runners seemed to lose a minute so officially my time was 1:18.35.

The event itself was well run, with some decent support around the start/finish area. I’m pleased I ran the event and did in fact win a prize thanks to the Australian age-category system. I picked up silver in the male aged 20-29 category (pictured, or what’s left of it) and fifth overall. 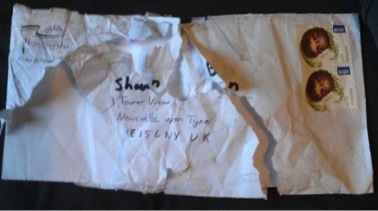 Permanent link to this article: https://www.tynebridgeharriers.com/2013/10/29/western-sydney-aus-half-marathon-race-report/