The organisors will have to do something special in 2014 if they’re to top this year’s event.

A fabulous course, superb organisation and truly wonderful support by an army of volunteers help put this inaugural event at the top of my list of favourite races in 2013.

I’ve got to start with the volunteers because in all the races I’ve competed in, never have I encountered volunteers and marshals with such enthusiasm.  Everyone of them cheered and clapped as the runners went by, and even when the route went out to the remote countryside, there was always a couple of marshals at every turn and junction to keep the runners on track and offer moral support.

The race, sponsored by Plusnet and organised by the Jane Tomlinson Run4all charity, was started by retired cricket umpire Dickie Bird and featured a smattering of soap stars, sportspeople and local celebs. The organisors had also managed to attract a contingent of Kenyan runners to make things lively at the front of the race.

Ordinarily I would have been looking for a time of around 3 hours, but having suffered a calf strain during the Redcar Half Marathon three weeks earlier and having ran just over 12 miles in the time between, my sole objective was to complete the distance and hopefully still be mobile afterwards.

By the time the race got underway, the early morning drizzle had cleared and there were signs of the sun trying to break through the grey skies overhead. After a welcome descent inside the first quarter mile, the course levelled out and led runners through the town centre, past the magnificent York Minster and then ventured along a and b roads into the country. My first 10k split was 45:39.

The next 10k split was almost identical (45:42), and I got the additional lift of seeing Mark Likeman from Race Timing Systems (who were timing the event) standing next to the 20k timing mats. After a quick hi-five and exchange of pleasantries with Mark it was back to the business with just over half the race to go.

I hadn’t ran more than half a mile when I suddenly heard the scream “Go on Double D” emanating from the crowd. Looking up I saw the familiar sight of Simon Pryde, and immediately gained an extra spring in my step. It’s surprising how much of a boost you get when you spot team-mates or friends amongst spectators and I have to thank Simon for his much appreciated shouts of encouragement. 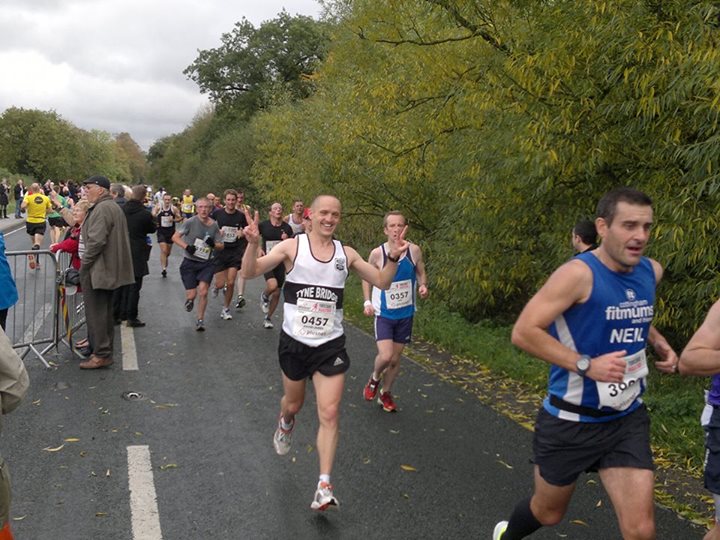 Reaching the 30k marker was notable for a couple of reasons. Not only was there a welcome drinks station but more significantly it’s where my race more or less ended. A pain in my calf had been noticeable for the previous few miles but thought nothing of it as I was running fairly well. But stopping to take on fluids proved to be the breaking point as trying to resume running was a definite no-no. So, having reached 30k in 2:20, I set about walking the remainder of the race with the target of finishing inside 4 hours.

Thankfully, with the sun now beating down upon the ground – making it feel more like July than October – the time (and miles) seemed to whiz by and before I knew it I’d reached the 25 Miles marker.

Having walked the previous 6 miles, with admittedly short bursts of running along the way, I decided to jog the last stretch of the course and eventually crossed the finishing line in 3:48.

A fantastic goody bag containing t-shirt, medal, crisps, chocolate bar and energy drink was par for the course for this excellent event and rounded off a perfect day.

Congratulations to the North-East runners I met on the day (Hannah from Heaton Harriers and Johnny & Mungia from Claremont) and many thanks to everyone involved in a marvellous event.

you can find out more about this event here: http://community.plus.net/blog/2013/10/21/you-did-yourself-proud/