Although he’s been away from the club for a few weeks, member Richard Jones is still busy knocking out those marathons. 51, 52 & 53…

I decided to do this event for a few reasons; it is a spectacular place and the scenery is amazing, the event covers two states (California and Nevada) which helps in my quest for all 50 US states and thirdly a few of the guys from the five day Dust Bowl event which I did back in March were taking part so I’d get the chance to catch up with them.

Getting to Lake Tahoe wasn’t exactly easy. I flew from Newcastle to Paris then on to Seattle before catching an internal flight south to Reno, a 20 hour trip. Lake Tahoe is about an hour’s drive from downtown Reno. Anyone who hasn’t flown into the US recently and is taking an internal flight needs to be mindful that you are required to clear immigration and physically collect your case, even if it is checked all the way through to your final destination, so leave ample time between landing and your next flight otherwise you may miss your connection. I had over two hours and I only just made it, the queue at immigration was painfully slow (finger print and face scanning of everyone plus lots of stamping of passports etc.) and there’s no fast lane for transit passengers.

After a night in Reno I picked up the hire car with Satnav and headed south to Lake Tahoe. I’ve seen plenty of lakes around the world and I’ve lived on Lake Geneva, but I have to admit the first glimpse of the 20 mile expanse of water from the mountain road really did make the hairs on the back of my neck stand on end. It is simply stunning and was worth the airfare alone. If you imagine an oblong shaped lake, on the east side is Nevada and on the West side is California, with the state line at the south east end and to the North. 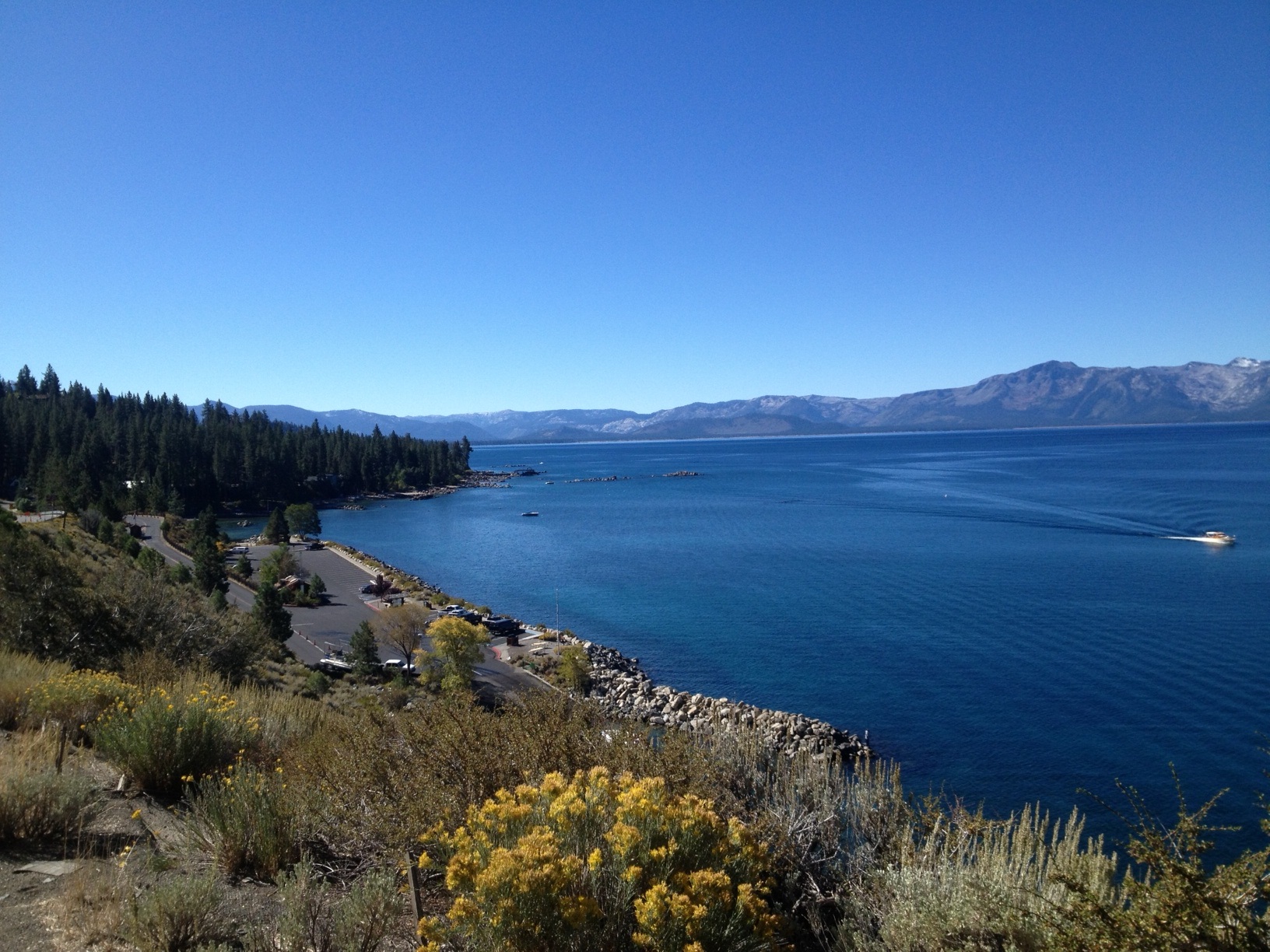 Worth the trip alone for this view

I was staying at the state line at the southern end on the Californian side. You could always tell which side you were on simply by the casinos; if there are casinos you are in Nevada whereas gambling is not permitted in California, other than the lottery. I’m not a gambler so I only spent a short amount of time wandering through a few of the casinos and didn’t start any games; in my opinion once you’ve seen one set of slot machines you’ve seen them all in my view, although the gamblers probably say that about marathons! You can play some exciting online casino games at https://clubvip777.com/y8/.

Lake Tahoe is a winter sports resort and dotted around the lake are several ski resorts offering everything from snow shoeing to downhill skiing on black runs. The lake also offers lots of water sport activities and even has its own coastguard station. I took my wetsuit with me and did a mile or so in the crystal blue lake the day before the first marathon. After swimming regularly in the North Sea, this was a piece of cake in terms of the water temperature and the limited motion of the water compared to some of the sea swims I’ve recently done. The locals seemed to be impressed with my bravery though, I got out the lake and about thirty onlookers gave me a round of applause! I did tell them I hadn’t just done the entire 20 mile distance north to south and it wasn’t as cold as everyone assumed! 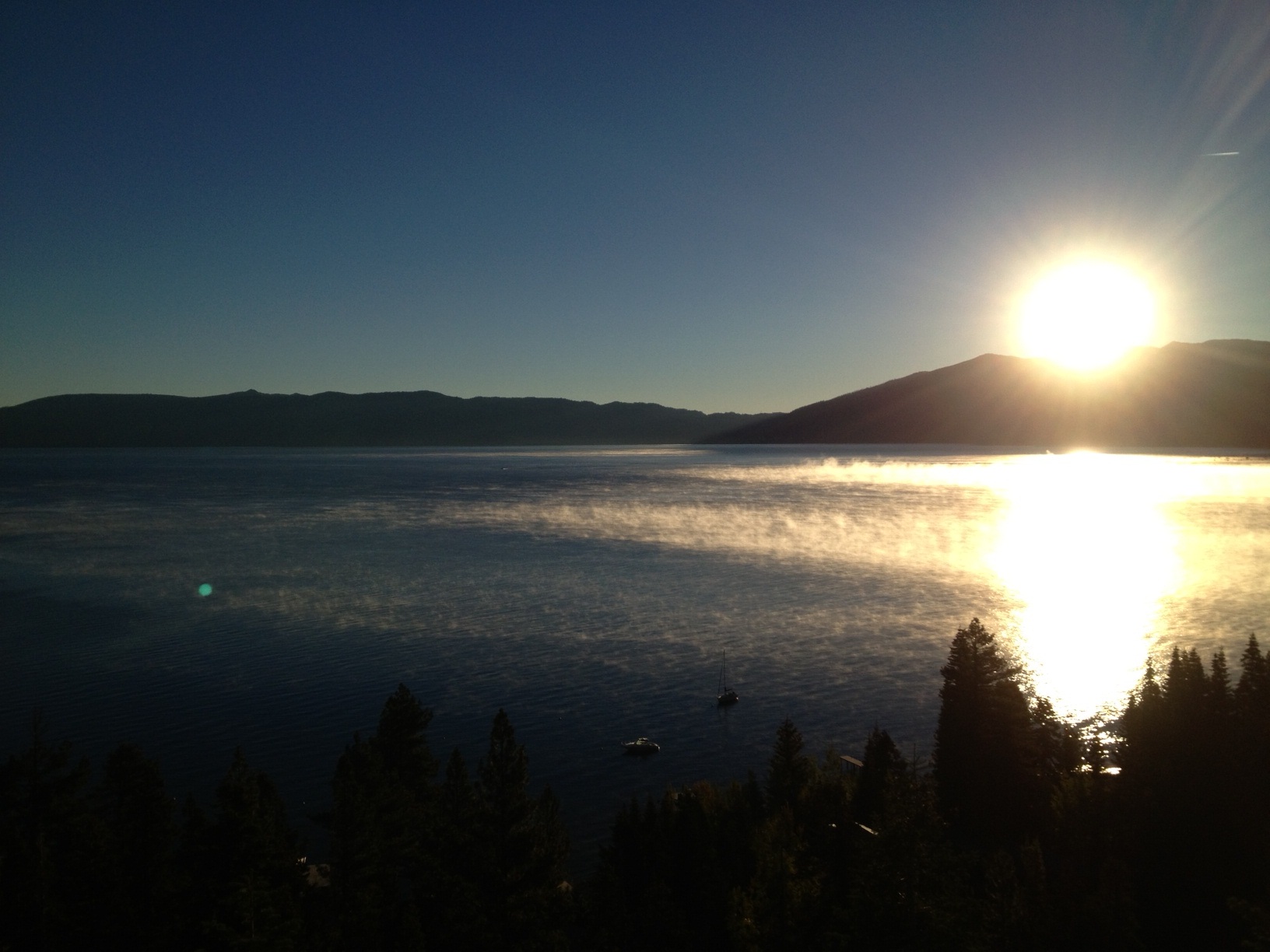 The event I was doing was the triple marathon although the race organiser offers over thirty different events including swimming, kayaking and combinations of half marathons, marathons and ultras. It all got very confusing and the race organiser sent everyone literally dozens of emails leading up to the race, to the point where I stopped reading them. Not a great way to organise things and it showed during the actual event. I had to attend two separate race registrations at two separate locations, a two hour “lecture” on Lake Tahoe, had to wear a wrist band which indicated I had paid for the shuttle bus back to the state line on days 1 and 2 etc. It was really messy and detracted from the enjoyment of the event.

Marathon Day 1 started with a bang, literally, with the race organiser firing a shotgun in the air one handed like some insane cowboy! That’s a first for me. It was so cold at the start, minus 6C, and I was glad I had my winter gear with me. One crazy runner was actually running the three days barefoot and was wearing only a club vest and shorts, it beggared belief. Everyone else was wrapped up against the elements; we were running at six thousand feet above sea level after all. After an initial downhill first six miles the course dropped onto the lake side until mile 21, then it was a five or so mile uphill finish that was not at all pleasant; the road went inland so there was no view of the lake and we ran into traffic on a dual carriageway. The space to run was marginal too, between the metal barrier preventing you going over the side of the mountain and the white line preventing you being hit by traffic. I had a couple of choice words at the end of the marathon for the ridiculous finish and the fact mine and everyone else’s GPS showed we had ran more than half a mile extra. My Garmin showed I’d covered 26.9 miles in just under five hours. 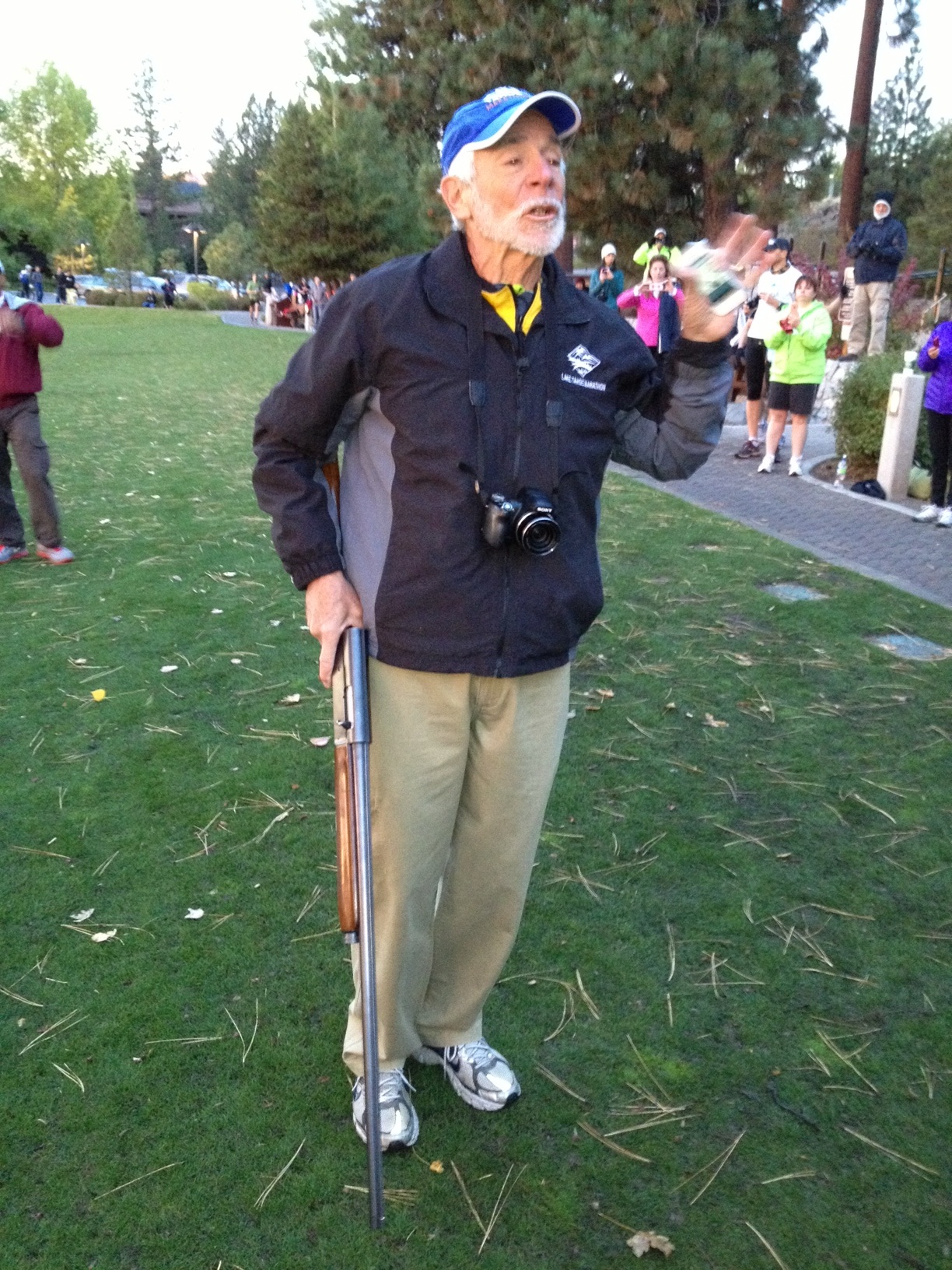 Not your typical starter pistol.

Day 2 started high up where day 1 had finished and as the driver of the shuttle bus dropped down the gears and struggled up to the start it was testament to the steepness of the first day’s finish. As the saying goes “what a difference a day makes”, the second day was lovely in comparison to the first. A downhill start and several miles of minimal undulation, coupled with spectacular scenery made for a really great day. I stopped regularly to take photos and a fellow runner from the US, Vanessa, who was at one point leading the women’s race and finished second overall, ran along with me for a couple of hours which helped pass the miles. There was only one big hill on this day, around the 23 mile mark, which I walked. I finished the day in four hours forty odd minutes, but to be honest the time is irrelevant.

Day 3 on the Sunday was the Tahoe City marathon, the finish point of Day 2, and the day had a distinctly city marathon feel to it. Whereas days 1 and 2 had been a small huddle of likeminded runners at the start this time there were long queues for portaloos and the usual novice runners sprinting up and down and doing elaborate warm up routines (we’ve all seen them before). Another first for me was the signing of the US national anthem, done by a local singer which was actually very moving, it was very well respected and I couldn’t help but feel we’ve lost all sense of patriotism in this country for reasons not to be commented on here. After another shotgun start we were off, dozens of fresh runners surged forward with the multiple day runners shuffling forward on weary legs. Whereas days 1 and 2 had only limited aid stations that basically stocked water, Gatorade and a few sweet things day 3 had aid stations every couple of miles, to the point where I was skipping aid stations. At mile 13 the half marathoners joined us, I heard the gun go and an army of what looked like young overweight females with headphones came charging down the hill to our right from an elevated half marathon start position onto the main route. The marathoners were quickly swamped and my usual unimpeded run suddenly became a game of dodge as this lot quickly slowed down to a walk after a couple of miles. We had been warned that at around mile 18 there was the “Hill from Hell” and sure enough it lived up to its name. 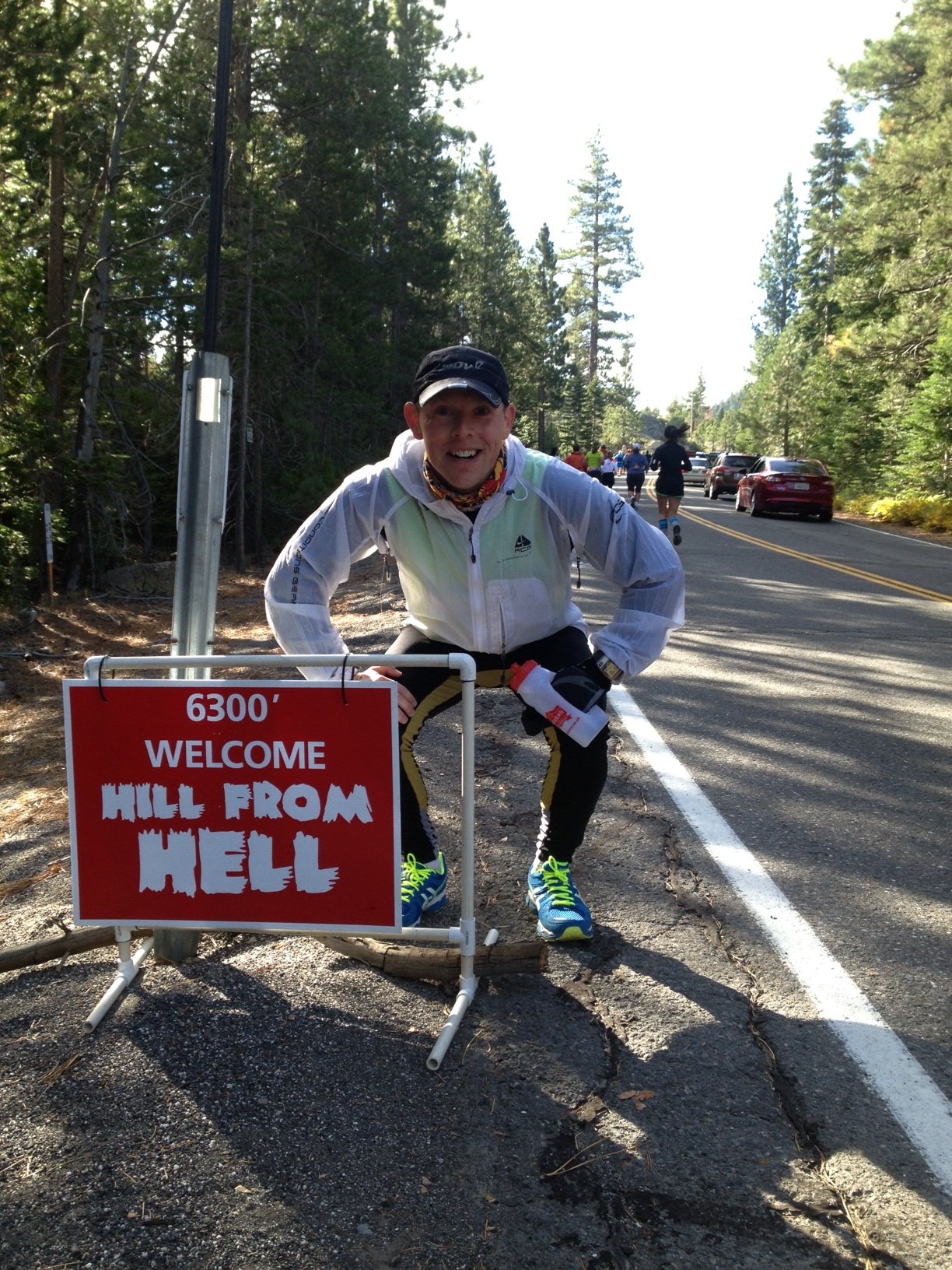 Those hill sessions in the Dene finally paid off

The race organiser had put little signs on the roadside at every 100 feet elevation gain on the hill which was neat, and after a mile or so of hard climb I could hear bagpipe music. A Scottish bagpipe player was knocking out a recognisable tune at the summit, strange to see a bagpipe player at Lake Tahoe but hey, who am I to comment! I stopped and took photos running up the hill and at the top, as well as the descent which provided spectacular lakeside views. 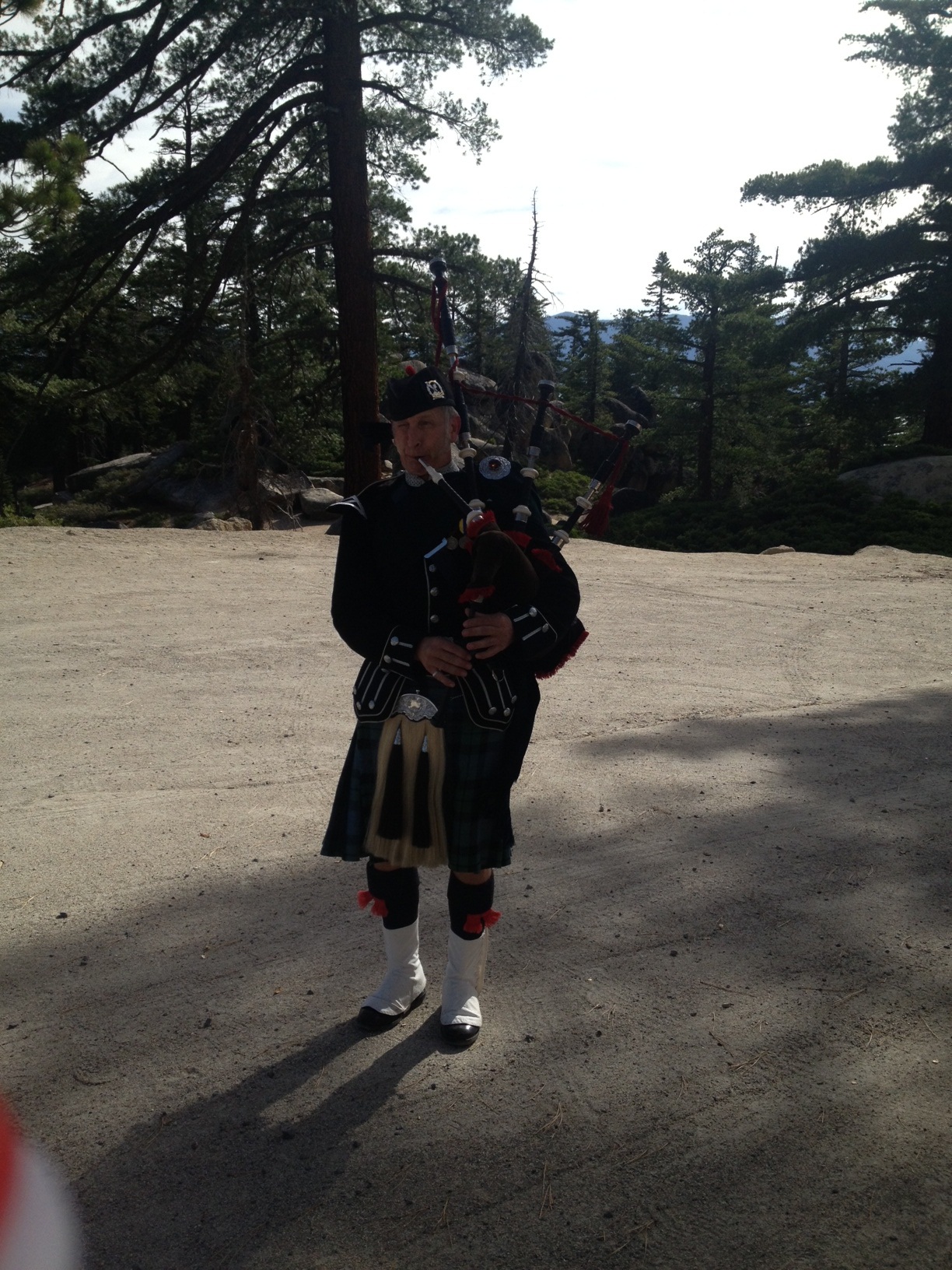 A blessing or a curse?

The finish was soon in sight after a couple of shorter but still challenging climbs and I felt fresh enough to finish with a sub eight mile last mile, coming in at four hours 55 minutes. I knew the last six miles since we had covered these in day 1 as the lake is only 72 miles around.

Three lovely medals plus a special medal for a triple finish, as well as a Lake Tahoe sports bag and long sleeve t-shirt made up with the somewhat chaotic organisation. My trip was rounded off nicely with an upgrade to business class for the transatlantic flight home, thank you Delta airlines!!!