Here is his latest race report.

Just to recap, as I am turning 50 this year, I decided to mark the occasion by doing races up the highest hills in the component parts of the British Isles.  Having already completed the Slieve Donard (Northern Ireland),  Carrauntoohil (Irish Republic) and Snowdon (Wales) races, this weekend was  the turn of the big yin, Ben Nevis; the highest point in Scotland and, indeed, the British Isles.

The Ben Nevis Race is a great occasion, steeped in tradition and history.  It was first ran in 1895, when it was won by William Swan in 2 hrs. 41 mins. The  record is held by Kenny Stuart who completed the course in 1.25.34 in 1984. The  race starts at sea level in Claggan Park in Fort William and is simply a case of  making your way to the summit of The Ben and back down to Claggan Park, a  distance of only 8.7 miles but with 4,409ft. of ascent and descent.

Travelling up to Scotland on the Friday the weather was pretty appalling  and the forecast didn’t look much better for Saturday afternoon’s race, with  high winds and heavy showers forecast. As it turned out the weather was ideal,  if anything, a bit too hot and sunny. I turned up at Claggan Park, where shinty  practice was in full swing in plenty of time for the 1.00pm start. Along with my  race numbers (to be worn on front and back), numbered metal disc (to be handed  over at summit) and t-shirt, I was given a small bottle of whisky produced at  the local distillery. I managed to overcome the temptation to drink it to  provide me with Dutch courage for what was to come. I got chatting to an elderly  chap who it turned out had ran the race 28 times and had some great anecdotes about the race. He introduced me to Scottish hill running legend Jimmy Jardine  who, in his 70’s, was about to run his 40th ‘Ben’ race after performing his role  as race starter this year. I met up with fellow NFR clubmates Phil Green, David ‘Dexter’ Armstrong, Dave ‘DJ’ Johnson and Andrew Callcott and before long we  were being paraded around the showground behind the Lochaber pipe band in a  somewhat gladiatorial fashion.

After Jimmy had sounded the hooter for us to go, we did a lap of the field,  before heading off on a rising tarmac road in glorious sunshine. After a mile or  so, the road comes to an end at the Ben Nevis Inn and we follow the rocky path, which is used by the hundreds of walkers who ascend Britain’s highest peak every day of the year. 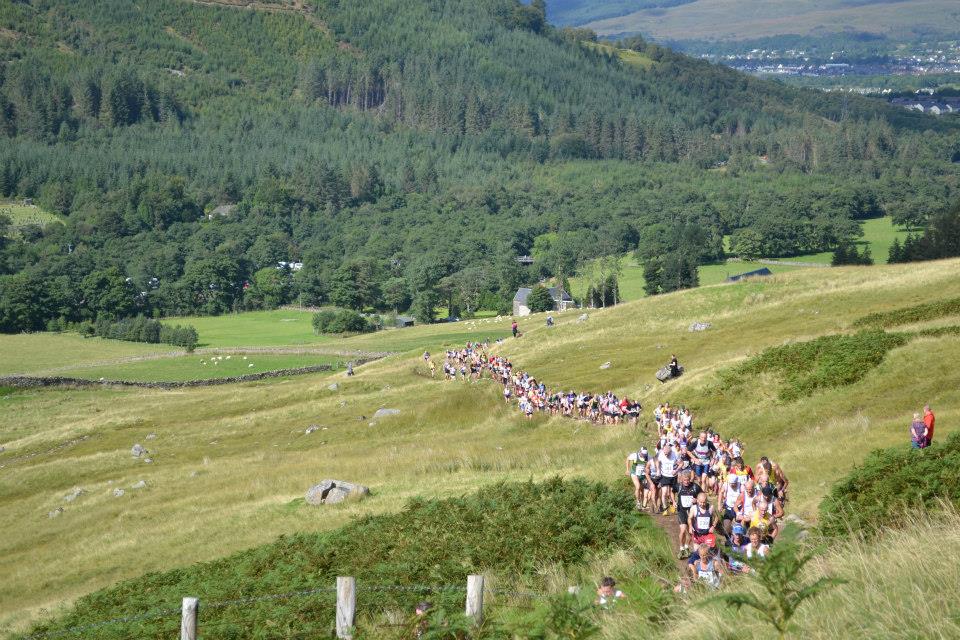 Dexter had disappeared ahead whilst I tried to stick with  Phil for as long as I could. After squeezing through a narrow gate, where Vicki  was taking photos, the path narrows and continues to climb with a few options of  whether or not to cut off a couple of zig-zags. Team Green were out in force  cheering us on as we crossed a series of bridges before the path, still  climbing, bends round to the left up to the Red Burn, which is about halfway  up. 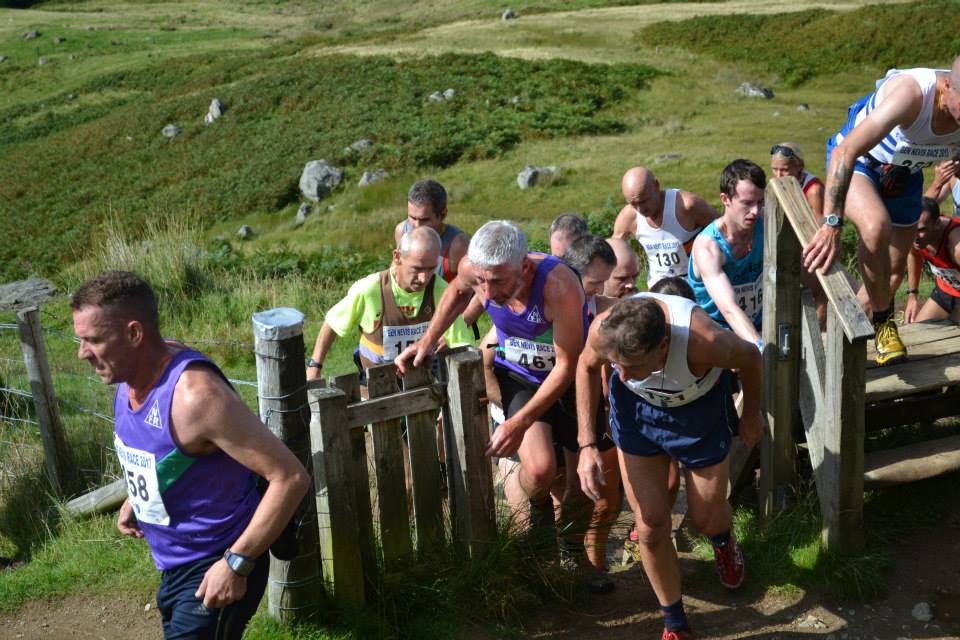 No time for pleasantries!

After having managed to scoop a few handfuls of water from the burn down my  throat, I had to choose whether to follow the zig-zag path up to the summit or  take the route one approach. I saw Phil taking the direct line so followed in  his wake. The direct line is pretty steep and, at times, I was moving on all  fours as stones and debris were being dislodged all over the show. I managed to  overtake Phil, and as the steep section started to give way to the less steep  summit plateau, the bearded figure of Finlay Wild, the eventual race winner, came skipping down on his ascent to our left hand side. The summit plateau is  deceptively large and resembles a rocky lunar landscape. It is also very busy,  both with walkers meandering around and runners making their flying descents, so  great care has to be taken to avoid head-on collisions and there were a few near  misses. My game plan of beating Phil to the summit came to nought, despite my  tactic of pointing out the glorious views of The Mamores to the south, then  sprinting on ahead. 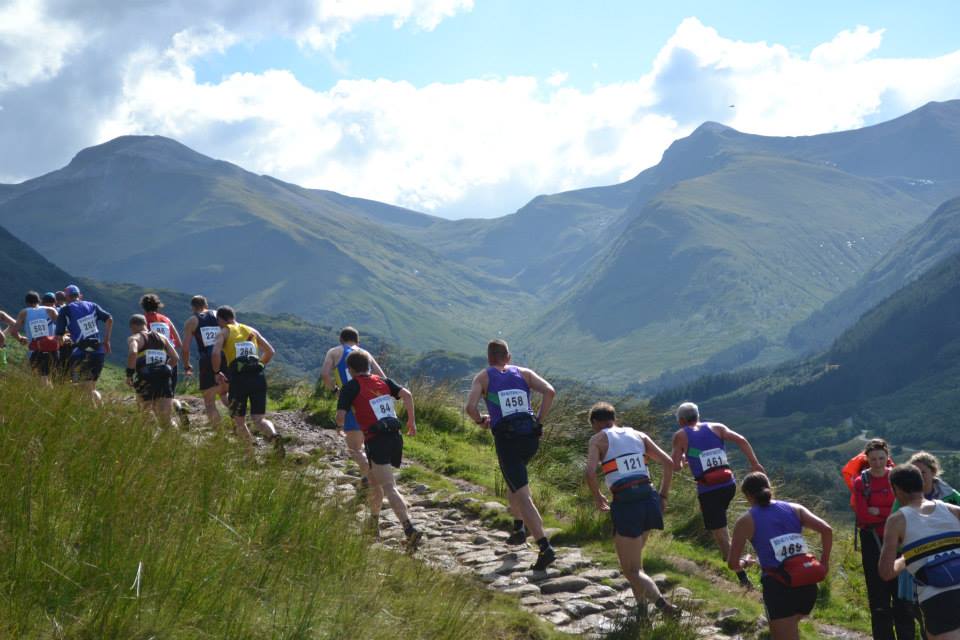 After handing my numbered disc over to the gaggle of marshalls huddled  together at the summit, I started my descent. The main difficulty, initially,  was the sheer number of people about. As the gradient increased, however, the  difficulty was finding a good line to run without finding yourself head over  heels. I was passed by a good number of runners on this part of the descent who were demonstrating better descending technique than myself. As I started to get  the hang of descending on the steep rocky stuff, it gave way to steep grassy  stuff, which entailed an entirely different steep learning curve. This year the  organisers had flagged out a specific route on this section to avoid problems  with erosion, so I attempted to stick as close as possible to the prescribed  route down to the Red Burn crossing, where I grabbed a few more scoops of  water.

Having crossed the burn and retaken the ‘tourist’path, it was a case of  trying to keep up my downhill momentum and concentrate on watching my footing on  the rocky slabs. Descending walkers were considerate and encouraging and soon  the Ben Nevis Inn came into view. Again, avoiding the temptations therein, I  continued along the tarmac road. This last section seemed particularly arduous  as a few blisters were started to make themselves apparent. I concentrated on  trying to make ground on a couple of runners about 100 yds. ahead. Just before  entering Claggan Park, a runner appeared from a field on the right. I don’t know  what local knowledge he had. The organisers, sadistically, make you run a full  lap of the playing field at the finish. 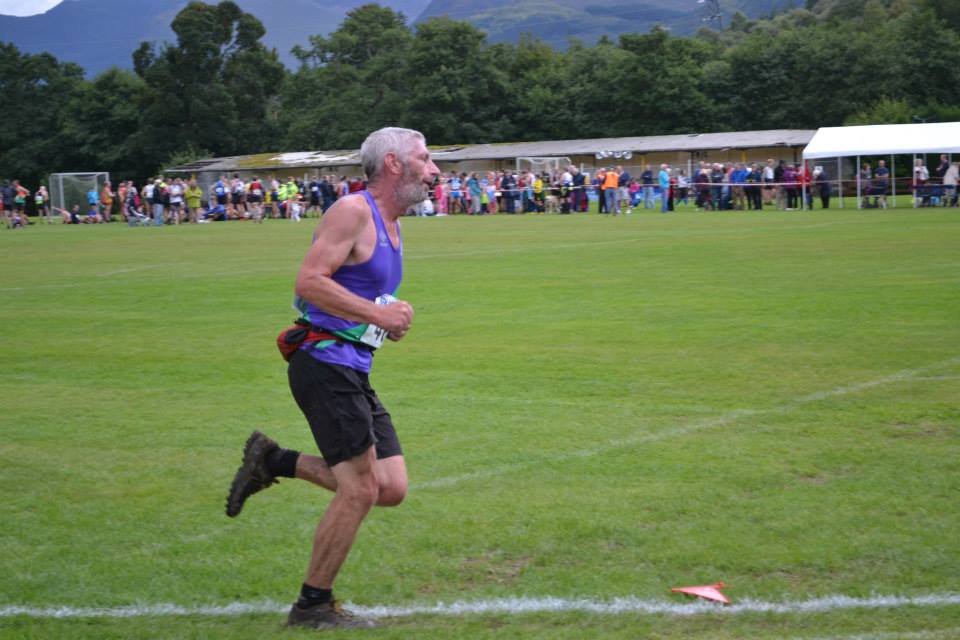 The final sting in the tail.

Halfway round, I heard Dexter screaming  at me to speed up. As I was running without a watch I had no idea what time I  was doing, but responded by putting on a sprint and reeling in the chap who had  popped out from the field as well as the pair I’d been trying to catch up. As it  was, my time was 2.17.46, which was 6 mins. down on what I did 2 years ago, but  I was quite happy with that. Dexter had got under 2hrs by 1 sec. in his 18th Ben  race whilst Phil had clearly had a better descent than me with a PB of  2.13.18.  Andrew finished in 2.29.44 and DJ in 2.37.58. Lochaber AC’s  Finlay Wild won his 4th consecutive Ben Race (apparently the 1st Scotsman to do  this) in 1.30.06 and the ladies winner was Carnethy veteran Angela Mudge in  1.52.40. Both had big winning margins of 7 and 10 minutes respectively.

So 4 out of 5 races successfully completed with the only the Scafell Pike race to go on my 50th birthday on September 21st. If anybody fancies joining me  for that one or for a night out in Keswick afterwards, it would be great to see  you.