To celebrate his 50th Birthday later this year, club member John Tollitt is tackling five ‘big’ races in 2013.
Here is his latest race report.
Chapter 2. Carauntoohil Mountain Race
Having ticked off Slieve Donard ( the highest  mountain in Northern Ireland ) last month, the second of my big 5 at 50 was  Carauntoohil in County Kerry. 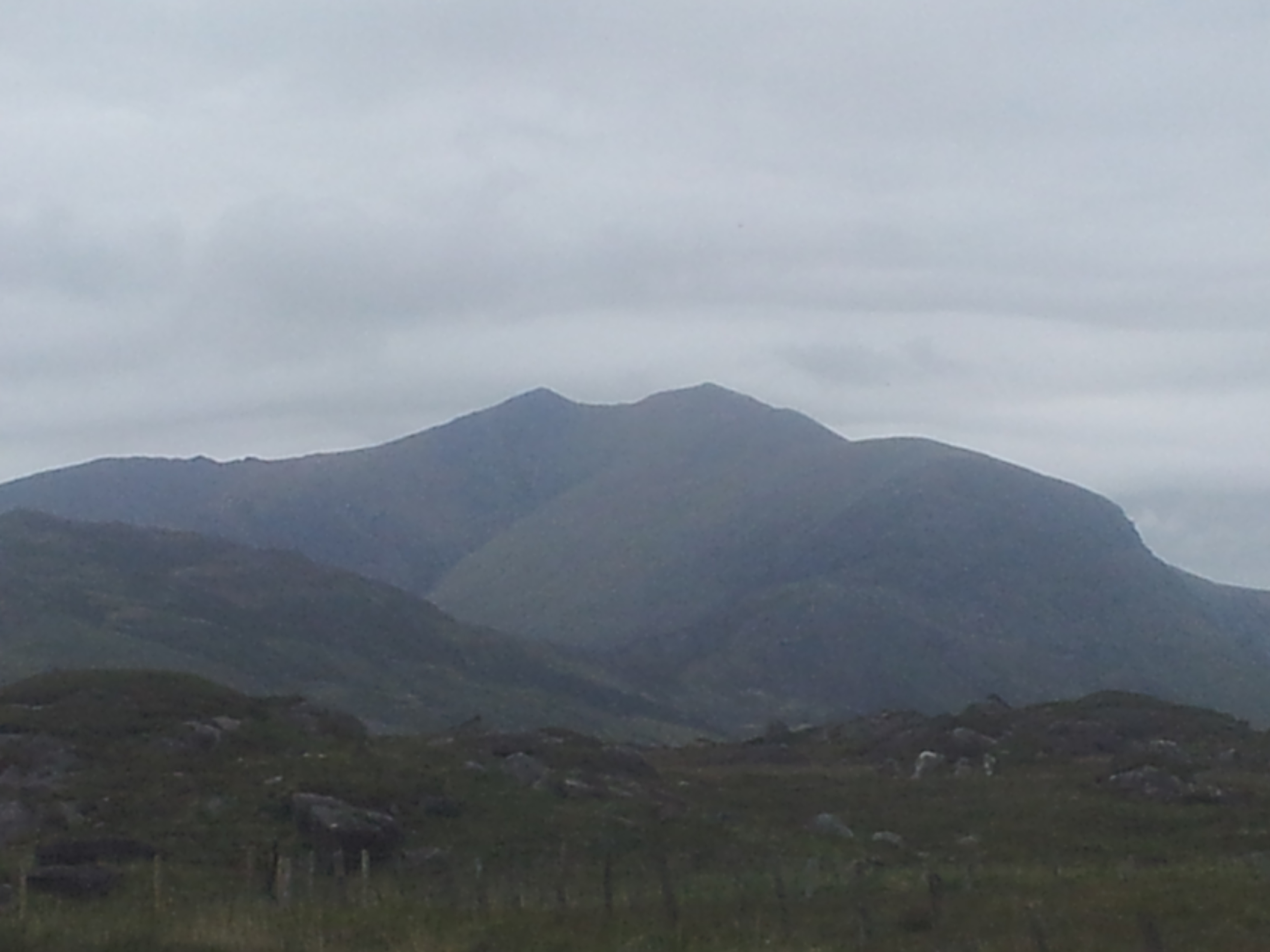 Friday afternoon saw me flying over from Cork  to Newcastle and then driving to Kenmare which was to be our base for the  weekend. The Saturday was spent driving clockwise round the stunning Iveragh  peninsula, which is marketed as the Ring of Kerry to the endless coach parties  driving anti clockwise. Apart from the beautiful scenery the highlights included  statues of local wresting champion  Steve ‘Crusher ‘ Casey resplendent in  his pants at Sneem and Charlie Chaplin at Waterville ( apparently he used to  holiday there as did Tiger Woods and Catherine Zeta-Jones. Presumably their  statues are on order). 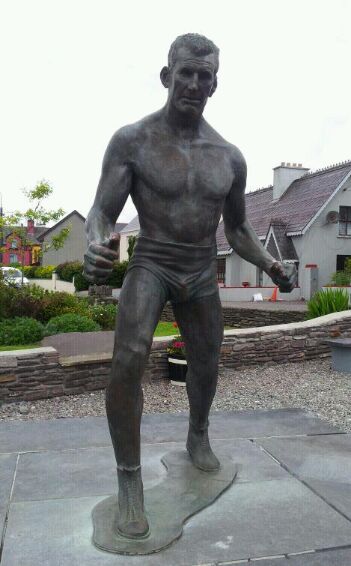 Attempts to find a weather forecast for  Sunday’s race proved futile as radio weather reports only appeared to tell you  what the weather was doing that day, rather than what it was expected to do  tomorrow. Calling in the Climber’s Inn in Glencar, where the following day’s  presentation would take place, the tv weather report indicated that  low  cloud and drizzle would be the order of the day. The landlady  remarked  that at least, the weather looked good for the race. It would appear that this  counts as good weather round these parts in June!
Driving over the narrow, tortuous Ballaghbeama  Gap to the start of the race, I was able to see that the 1039 metre summit of  Ireland’s highest point was cloud free. However, this was not to last as the low  cloud timed its appearance to coincide with the start of the race and remained  in-situ until long after the finish.
Registration took place in a farmer’s yard and  I recognised a few friendly faces from the Slieve Donard race. The actual start  was some way up the hillside on the Kerry Way, a long distance foot path. After  some brief, navigational instructions from the race organiser we were off up the  hillside and before long into the cloud. Shortly after passing the carcass of a  dead sheep we came to a junction with a fence where we left the rough path of  the Kerry Way and started ascending the west ridge of Caher over tough, stony  and boggy ground. As the race thinned out I tried to keep one of the Bowland  Fell Runners in my sight as his bright orange vest stood out like a Belisha  beacon in the cloud. The route levelled out for a bit before the steep pull up  to Caher; Carauntoohil’s sister summit. Negotiating the steep, ridge-like  descent to the low point between the two summits proved tricky as I lost a few  places to more nimble footed runners. Glances through gaps in the cloud showed a  sheer drop to the left and concentrated the mind on attempting to keep a sure  footing. Ascending up to the summit of Carauntoohil, the lead runners passed me  by making their return, as it was an out and back race. One of them shouted that  it was very busy on the top. He was not wrong, as I was to discover shortly  afterwards, as I had to barge through hordes of people that were congregating  around the giant crucifix which adorned the summit, and which, according to our  pre race briefing, had to be touched before making our return. 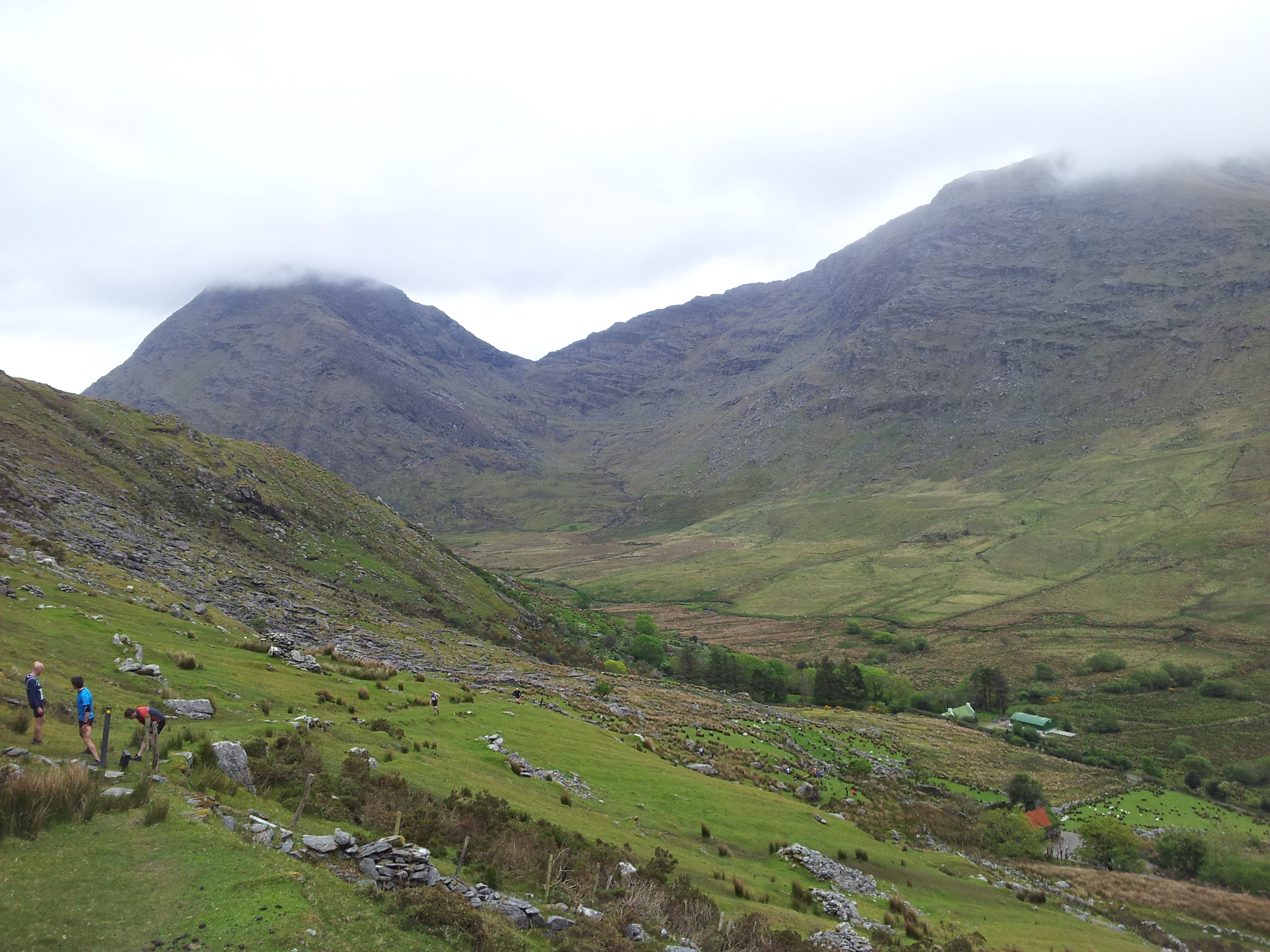 Returning to the narrow saddle between the two  peaks, which was now crowded as runners were travelling in both directions, I  found myself taking a somewhat more precipitous line than would be desirable. I  scrambled up to the top of Caher, before making a more straightforward descent  down the broad ridge. Midway down the ridge, it broadened and flattened, and I  became aware that I could neither hear or see anyone or thing in front or behind  me. I slowed to a halt expecting to see runners emerging out of cloud behind me  but no one appeared. I waited for, what seemed like an eternity, but was  probably only a few minutes. Just as I was about to get my map and compass out a  runner’s silhouette emerged out of clag and I was relieved to tag along behind  him. ( After the finish he admitted to me that he had had no idea where he was  going and had been equally relieved to see me). 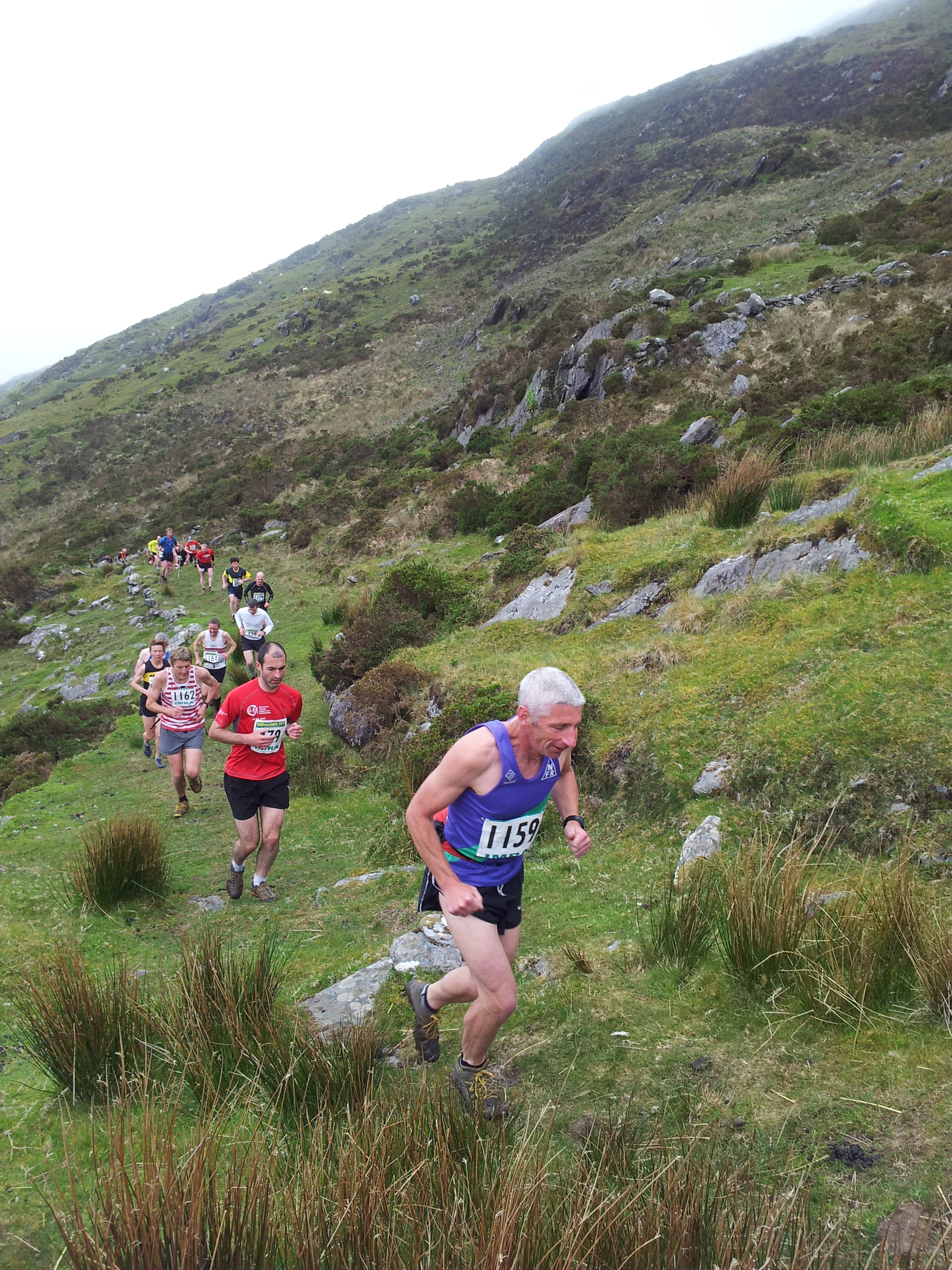 The descent steepened and it was tricky going  over the wet rock and thick bog. Running was difficult and I took a few tumbles.  Picking up the route of the Kerry Way an unmistakable and familiar aroma reached  my nostrils. Never have I been so relieved to see the rancid corpse of a dead  sheep as it confirmed that I was on the right route. As the cloud lifted I could  see the valley below and I knew it wasn’t far to the finish line. I finished a  respectable 33rd out of the 82 starters. The winners of the men’s and women’s  race both recorded course records. I was then able to load up on tea and cake at  a handily placed cafe just below the start, which to my surprise was run by a  couple from Newcastle.( ‘ Geordies here, Geordies there, Geordies……..’)  We then drove back to the Climber’s Inn for  the traditional and protracted prize giving, during which I was surprised to be  summoned up and given a choice from the ecletic mix of prizes (kitchen scales,  towels, glass tumblers etc.), in recognition of my 5 peaks challenge (I came  away with a very nice t-shirt). I also got chatting to a journalist from the  Irish Sunday Times who is writing a piece on fell/mountain running and might  include me in it.

Flying back from Cork to Newcastle the  following day on a clear evening the plane passed over Anglesey and, beyond the  Menai Straits, the mountains of Snowdonia were visible in the sunshine. This got  my mind thinking about the next leg of my adventure; the International Snowdon  Race on the 20th July…….

Permanent link to this article: https://www.tynebridgeharriers.com/2013/06/04/carauntoonhil-mountain-race-report-2nd-june-2013/