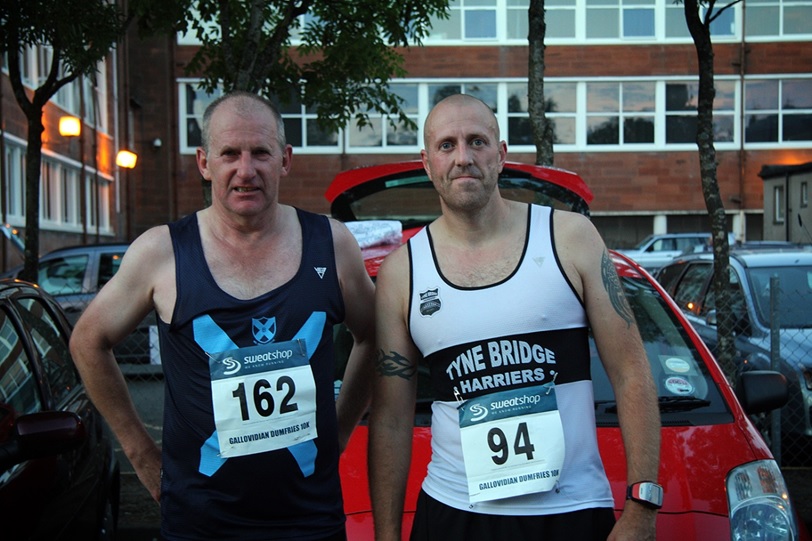 My affair with Scotland began when I was a young boy. I remember my father being knowledgeable in Scottish history. When we took an extended caravan tour around the country in around 1977-78, travelling right up to the north and then down the western coast, the romance of the tales my father would tell as we visited the various battlefields, castles and ruins struck a chord within me. I’m told by my mother that we also visited Mallaig on that trip so maybe I crossed paths with Kenny Mac! I first remember being a Scotland supporter as a 12yr old in 1982 watching David Narey open the scoring against Brazil in the World cup.

So, travelling north of the border for a race always fills me with excitement and this was no exception. After recent trips to Glasgow (Brian Goodwin 10k) and Hawick (Teviotdale 10k) with Mal Steel we were off again, this time to Dumfries for the Gallovidian 10k. Having notched pbs at both races I was looking for a third. Mal had spoken to a few of the Dumfries Harriers about the race when he was up on the isle of Coll a few weeks back and the course was apparently fast and flat.

The trip across passed in no time at all as the chit-chat was relentless. We arrived with loads of time to spare and spoke to some of the guys Mal had seen on Coll. After a quick look at the start and finish area we got our kit on and hung around for the start. 7pm eventually came around and a couple of pipers led the 260-strong field along to the start line. After a quick brief we were off!

The race has an uphill start but after 10 seconds or so you are heading downhill as you head out of the town on a nice road surface. The start was quick and I found myself being pulled along with the downhill gradient. I felt fresh and strong, probably the 2 cans of Pepsi I downed in the hour before the race. I tend to stay away from caffeine so with that amount of stimulus flowing through me I was probably twitching and jerking all over the road (in a good way that is).

The pace was 6.20 as we approached the 2nd small incline that we were told about. I noticed Mal was right on my shoulder at this point. Over the hump and the course took a downhill again. The guy in front of me slowed down and I tagged onto a guy from Dumfries Harriers who went past me.

The gradual downhill just kept on going and I started to worry. Almost a mile and a half of downhill must mean a substantial hill somewhere soon. Nevertheless, I kept the pace up and tried to stick with a small group.  We reached a roundabout and turned left at what was the bottom of the downhill stretch.

There were loads of marshals around and plenty of folks offering support and a few kids giving high-fives. The roads were closed on the left hand side but a few cars were still coming towards us on the right. The route continued along quiet country roads and the surface was good as we hit 5k in 20.11.

A quick calculation and I knew that I just needed to do the 2nd half of the race in 22.27 to beat my 42.39 pb from Hawick 10 days ago. I thought about a sub 41 time but quickly realised I wasn’t going to do that and resolved to attempt a sub 42.

We came to a water station and I grabbed a cup. I’m useless at drinking on the move and, true to form, it went all over my face and then I choked. So I stopped, had a swig then set off again. I had lost ground on the small group of 4 that I was with and I would never get back to them.

We headed back into the town and along footpaths now. The roads undulated a bit but there were no real climbs. In fact, we seemed to be going downhill again! I had spoken to Mal on the way up about a place in Ayr which, when you are driving along the road, you seem to be going downhill when you are actually going uphill! I wondered if this was a similar optical illusion as I was going at snail’s pace!

Early into the 6th mile I was struggling. The Pepsi was long gone and I was thinking maybe I should have went with Coke instead. Pepsi has always been second best to me. I should have spent the extra 20p for the real stuff! Anyway, I did what I usually do when my pace drops uncontrollably – I stopped.

I took 3 deep breaths and then set off again at a quicker pace. I had recovered but a quick look at the garmin and my pace for that mile was now down to 7.40. I tagged onto a couple of guys and kept with them as we went through an underpass. I could hear the bagpipes playing now and they helped with that inner battle I was going through, my mind telling me just to take it easy to the finish and take a couple of seconds off my pb.

A sharp turn and quick downhill and we were back to the sports centre. The finish was half a lap of the track. I’ve never ran on a track before but I can see the attraction. It was nice and spongy and looked brand new. There were loads of folks there sitting in the stand as I sprinted for the line on my own to take 52 seconds of my pb with a time of 41.47 and 50th position.

I collected my t-shirt and waited for Mal who, after coming back from a recent calf injury and also getting over some sort of bug, came in in a respectable time of 46-58 and 102nd position out  of a field of 233 finishers.

Mal, running for his Scottish club, Bellahouston, had a chat to a fellow club mate and we thanked the guys from the organising club and headed off home.

All in all this is a great race with excellent pb potential. The route is very well marshalled and well supported. The results were up this morning and are accurate. The surroundings are very nice and it has a great finish on the track. I would definitely recommend this for next year.

Results can be found here – http://www.dumfriesharriers.co.uk/mabie-trail-race

Permanent link to this article: https://www.tynebridgeharriers.com/2013/09/05/gallovidian-10k-race-report/