The event, hosted by Sunderland Harriers, was a record-breaking success with 115 finishers and saw the host club claim victory in both Male and Female categories, courtesy of Nathan Reed and Michelle Every.

Mark Reynolds completed the small (but capable) team for Tyne Bridge and sends this report.

Mid-summer, light evenings, warm weather and the chance to do loads of mid-week racing – what could be better?  Having taken on a few 10k’s over the last month, it was time for something different and a trip to Sunderland Harrier’s annual hill race at the Penshaw Monument.  Located opposite Herrington Park, site for this year’s freezing National Cross Country Championships, the course is steep, off road and varied offering challenges and spectacular views.

Having pre-registered I arrived half an hour early to pick up my number from the handily placed Race HQ, which was parked at the bottom of the hill.  Spotting Simon Pryde in the queue at the other window we had a chat and scanned the horizon for black and white vests, of which there were none.  Around us a sea of navy and royal blue Sunderland vests with South Shields stripes for contrast.

After the briefest recce of the course confirming that it was hilly and rough, we lined up at the bottom.  By way of, fairly limited, preparation both Simon and I had watched last year’s video of the race featuring TBH’s own John and Micky in action.  Basically the start and the finish looked really tough with the bits in-between not too inviting either.  Suitably intimidated the whistle blew and we were off across a field of knee deep grass to the steepest start to a race I have ever encountered.  Scrabbling up the bank we hit the gravel track and looped round the back of the hill for our first ascent.

Simon and I worked our way up the field and he lead me to the top – there were prizes for the first lad and lass to the monument  – before a sharp descent back down.  We now began the first of two loops around the hill on woodland trails.  As we entered the gloom the path steeply descended and I picked up speed keeping Simon in sight ahead.  I managed to overtake a few vests hoping I wouldn’t lose ground too badly on the inevitable climb back up.

We were soon ascending again through the trees and out into daylight where, to add insult to hill climbing, you had to hurdle a flipping stile at the top!  Second loop now and knowing what was to come I tried to make up ground going down and consolidate going up.  I didn’t bother looking at my watch because pace was all over the place.  There was strong vocal support all round the course from spectators and stewards – and no one was reluctant to give the visiting black and white vests a much appreciated cheer on.  I was passed on the hill by a chap with earphones in, which bothered me slightly, so I piled it on to hurdle the stile first and regain my place.

Finally we returned to the steep path up to the summit with Penshaw towering above us.  A final lung bursting stagger to the line and it was all over.  No one spoke much at the finish as we all gasped for air, with one or two collapsing on the ground for a wee rest.  Having recovered we took in the fine view of the North East and clapped in the final runners.

A grand evening out and excellent event put on by Sunderland Harriers – no frills or extras just a good honest run up a hill.  Well done to Nathan Reed and Michelle Every of Sunderland Harriers for their respective victories.  This year’s video here. 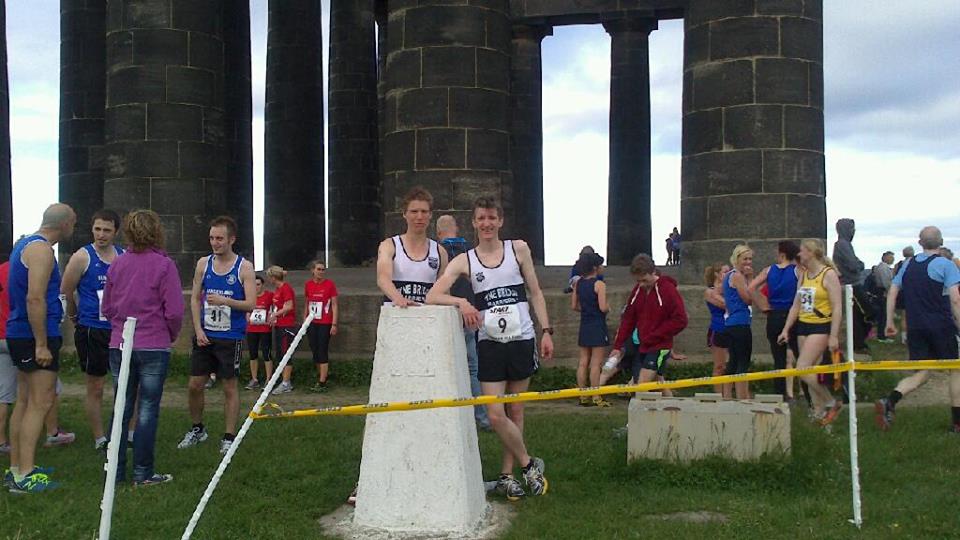 Permanent link to this article: https://www.tynebridgeharriers.com/2013/06/06/penshaw-hill-race-results-2013/